“Un Chien Tangerine” is a conventional episode in its storytelling, with a standard structure of a main storyline, interspersed with a minor, shorter story. This week’s A-story featured Lana and Archer away on a mission (much like last week’s episode). Not only was this episode specifically reminiscent of the latest installment with Lana and Archer bickering their way through a mission and being separated from the rest of the characters, but also of the many times the writers have introduced this situation. Again we have a classic Archer episode structure that the writers use to insert whatever themes or topics they are interested in.

“I assume Lana is mad because Sterling is pushing her buttons, what a surprise” Malory says, pointing out the recurring dilemma. (Nice way for the writers to say, “Yes we are doing this again, deal with it.”) As I’ve said before, I don’t mind the repetition as long as the specifics of the story change and new comedy is being introduced, but maybe having, ultimately the same premise for two back-to-back episodes wasn’t the best idea.  In this case it felt more like a re-hash of the last episode, especially with the Lana/Archer sexual tension-romantic undertones, which I know are a constant in the relationship between those two characters and is a crucial part of their dynamic, but we had delved so deeply into it last week that it just felt way too repetitive. 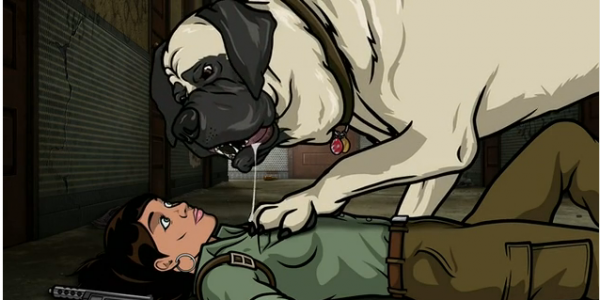 Still there were many things to be praised about this portion of the episode. The mission takes Lana and Archer to Tangier where they have to retrieve an agent. Little did they know that the agent they were sent to extract, Kazak, was really an immense English Mastiff, who has a strong aversion to firearms. Archer quickly develops a bond with Kazak, which promptly irritates Lana and encourages Archer. It is always fun to watch Archer bond with a random animal.

His childish giddiness when interacting with Kazak was a joy to behold, from his wonderment at the dog’s behavior, “Lana look, he think’s he’s people/vampires,” to the hilarious little coos he gingerly muttered to the giant canine, “who’s the son of a bitch, are you a son of a bitch?” It harkened back to his tumultuous love/hate relationship with Cheryl’s ocelot Babou, who Archer was memorably attached to for an episode. Archer’s clearly got a way with the animal species, if only he had gotten the grades to go to veterinary school. The involvement of Kazak also gave the writers the opportunity to revisit Malory’s relationship with her precious dog Duchess, whom Archer still resents; she really did love that dog more than she loved Sterling. 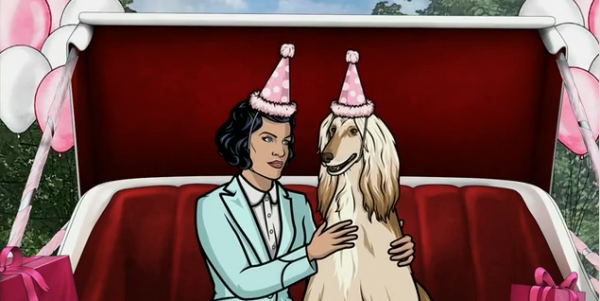 Lana being irritated by just about everything in their mission was mildly amusing, it was made better by Archer’s superior tolerance to the Moroccan culture/setting and overall enjoyment of Tangier. Lana’s frustration grows as she sees Archer take everything on in stride. Archer takes every opportunity he has to drive Lana absolutely crazy and that coupled with an unforeseen setback in their quest drives Lana to quit. Her little foray into the desert drove Archer to experience some self-awareness, only dismissed by the end of the show, as usual and also another opportunity for him to come to Lana’s rescue.

Isn’t it time for Lana to get out of a scrape on her own, or for her to be the one to rescue Archer? How many times are we going to see her succumb to damsel in distress status? She is still a badass ISIS agent can’t the writers acknowledge that? Despite dubious choices in characterization, the final act action sequence was pretty great, it was nice to see the payoff of Kazak’s dislike of guns and him attacking the bad guys and Archer playing with Lana’s feelings. Also, the animation in these Morocco sequences was really beautiful and well done, the seamless movement and the visual look of it all were very pleasing and fun to look at. Seeing that little VW Beetle zip its way through the desert was a treat. 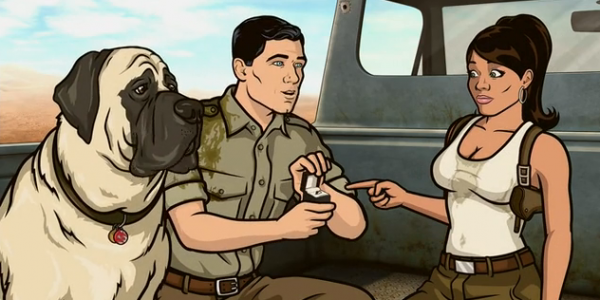 The B-story consisted of the goings on at ISIS, most notably Pam’s plea to Malory that she be made field agent. After successfully acing the IFAAB (ISIS Field Agent Aptitude Battery) Pam is insistent that she be promoted. This seems like a no-brainer for Malory, although Pam is a complete kook, she meets the qualifications and is surprisingly good at potential spy stuff. She, much like Archer, is like an idiot savant; she could be extremely successful as an agent while still failing at life. But seriously, how great would it be to have Pam as a field agent? Se would definitely be more successful than Cyril and certainly more interesting to watch (no offense to Cyril, but the most proactive we have seen him be is posing as an accountant on a mission, pretty boring). The possibilities that emerge from this are endless and exciting, it would be awesome to have an episode with Lana and Pam going out on a mission and see the trouble they get themselves in, same with Pam and Archer. This potential advancement for Pam offers up future character pairings that have not yet been extensively explored and could become great wells of comedy. The prospect of Pam’s promotion brings an air of freshness and welcome change to the series.

Apart from Pam’s sudden desire to become a field agent, not much else happened over at ISIS. There were some great Cheryl moments like the return of the gypsy woman’s predictions and the amazing moment with Malory in which she is genuinely confused about Malory’s presence in the office. Her shock and awe could be another manifestation of her utter stupidity, but it could also be seen as a logical doubt seeing as we have seen holograms (Krieger’s girlfriend) walk around ISIS before. Who’s to say that she wouldn’t attend work via hologram? It sounds like a very Malory thing to do. So I would like to give Cheryl some slack for her seemingly moronic and simplistic reaction to Malory’s snarky retorts.

-- Initially I thought the episode’s title “Un Chien Tangerine” was an allusion to the famous Dali film, Un Chien Andalou and was expecting a trippy, surreal, non-linear, disturbing episode. Kind of disappointed it didn’t happen, but still enjoyed the reference.
-- Who knew Archer was such a big Ginsberg fan? His fangirling over the “Howl” poet was great. Surprisingly literate, that Archer is.
-- There was a lot of animal-related childhood trauma talk in this episode. Pam’s story about her pig Leon and Archer’s distress over Malory and Duchess’ relationship.
-- After Cheryl’s confusion of what a chocolate mousse consists of, “ugh, gross there’s moose in this?” It was nice to see that she understands the concept now, hopefully Lana won’t succumb to death by mousse, though.