You know, as I look back on Archer’s fourth season I remember how uneven and at times underwhelming it was. Don’t get me wrong, Archer is undeniably one of the best animated shows out there, even better than most straight up live-action comedies currently on the air, but there is no question that it was starting to lag in quality here and there. Those first couple of seasons were just so overwhelmingly awesome and hilarious, they established a signature tone and unforgettable characters with ease and limitless style, that the fourth season felt average, for Archer standards. The relationships were getting a little stale and repetitive. And how many more missions would Archer predictably compromise only to cockily recuperate and come out triumphant?

There were significant moves to introduce fresher scenarios and elements to the series, like Pam working her way into field agent work, and Lana’s surprise pregnancy. Those developments certainly presented new character pairings and opened the narrative’s future a great deal. But nothing could prepare us for the complete 180 the show takes in the fifth season opener, “White Elephant”. Adam Reed takes a huge risk and retools the increasingly popular series and it really couldn’t have come at a better time. Just when it was starting to slip slightly in quality, Reed wastes no time in scraping the spy/undercover agent thing and bringing in the drug trafficking, Archer Vice. Love it. After an FBI raid ISIS is no longer, our characters have no better option than to become badass drug dealers. 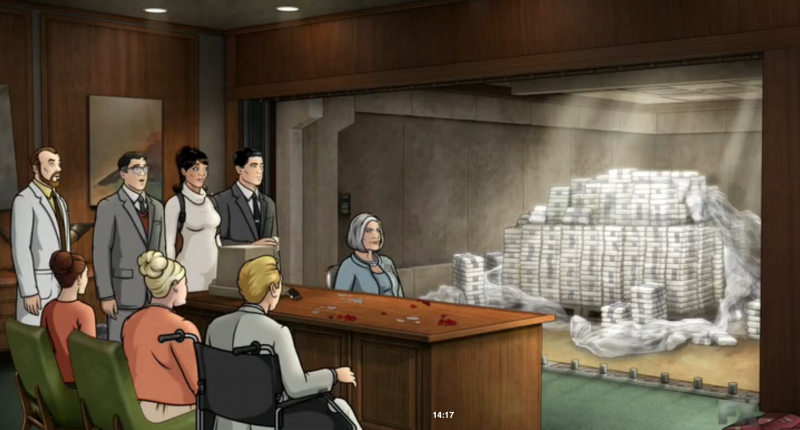 This is something that you would probably never see happen on one of those long-running animated series over at the Animation Domination line-up at Fox, certainly not as a permanent change. I mean, Family Guy recently had some fun by making many fans believe that they had killed off the beloved Brian Griffin permanently (people were not happy), but that lasted a hot minute. And that was only the death of one character, imagine the Griffins moving out of Quahog and getting into the witness protection program permanently, yeah it was fun for that one episode but it isn’t something that the show could sustain for its entire series run. A show like that is much more traditional in its structure and premise and many would probably cause an uproar at the drastic change. Archer, on the other hand, has always been a subversive show and has the kind of swagger to pull that off. Also, its tone and sense of humor lends itself to such an irreverent move, so many of its fans would appreciate such a radical shift rather than criticize it. Plus, the transition posed by the episode seems a believable one, for the world portrayed in Archer. It totally feels plausible that ISIS headquarters would be harboring a literal ton of cocaine, for whatever reason, and that the characters would agree to establish a cartel in order to get some cash.

And about the episode itself, it was signature Archer. Was it good? Did it still feel like the Archer that we al know and love? Yes, fast paced jokes and gags, fantastic interplay among the characters, hilarious action scenes and weirdly dark humor were a plenty. The narrative in “White Elephant” sets up the series’ transition and works as a kind of prologue to the upcoming rebooted Archer Vice. It is a simple, focused half-hour of hilarity that focuses on establishing the new premise in a surprisingly logical and effortless way. It was, however, a very short installment, running just under twenty minutes, it might be the shortest episode of Archer. This might have to do with the fact that they had just one straightforward story to tell (hopefully), but could just be FX getting more ad space. We’ll see with time if this will be an ongoing issue. It certainly had its highlights; starting with a beautiful and graceful office ballet before the FBI make their move on ISIS. That opening scene was so pleasant and dreamlike that it was easy to assume it was some kind of dream sequence, but the sudden tonal shift was delightfully dark and amusing. As the series is taking this momentous step and essentially leaving behind its original premise, Reed does take some time to commemorate some of its best moments. In one of the most fun sequences, right after Mallory implores them all to “say nothing,” the ISIS crew all attempt to attain immunity by disclosing all of ISIS’s shady dealings. Ha! What comes from that is a hilarious little montage that highlights some of the most amusing and iconic moments of the series’ run from that time Mallory shot the Prime Minister of Italy to that time when Archer took over that pirate island paradise. It was fun to reminisce along with the characters and when you hear it fast procession like that the absurdity and straight up awesomeness of the show is notably enhanced. Like Cyril says, “Geez, when you just list everything ISIS has done, it sounds kinda bad.” It is kind of ridiculous that all that has occurred in the span of four thirteen-episode seasons. Nice stroll down memory lane.

But nothing beats the greatest montage that ever montaged. The episode concludes with an elaborate look into the series to come, in an insane montage that previews the crews crazy exploits as a drug cartel complete with a country singing sensation, Cherlene; an invasion of Vietnam; lots of explosions and shootouts; the return of the Yokuza; a tiger; and a crazy, manic Pam being awesome. It’s incredibly ridiculous, outlandish and just absolutely fantastic.

While throwing away a series’ premise is generally undoable in television and an incredible risk for any program, the Archer reboot is definitely welcome and seems to already be breathing new life to the FX series. Cannot wait to see what season five has to offer. What did you think of the season premiere? 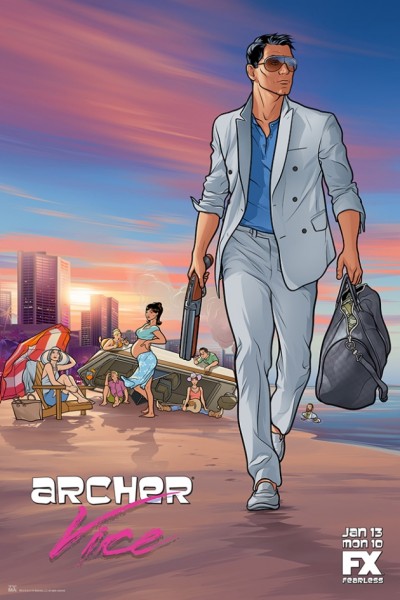