Are You Smart Enough to Play An Artsy Game?

PC Gamers tend to be a little brighter than the average person; we have the brainpower to change a graphics card, we can Min/Max our stats in Online RPGs, and plan balanced strike forces in Real-Time Strategy games.  We can even calculate the ideal trajectory for a grenade in our shooters.  But how does our superior left-brain functionality deal with the idea of “Video Games As Art”?

There’s always some new game which the press touts as breaking the barrier between game and art, whether it’s Bioshock’s dissection of Objectivist philosophy, or Braid’s deconstruction of traditional gaming story-telling.  Often these Artsy Smartsy games can leave me feeling like I walked into an Ingmar Bergman film when I thought I was going to see Michael Bay’s new flick.  I know there’s a bunch of symbolism and stuff going on, but I’m filled with crippling doubt that every single thing is some profound artistic statement that I just don’t get.  Does that bicycle mean something?  Is the dog barking in the background a metaphor?  Was this set based on some classic painting that I never saw?

There is one developer in particular who seems to specialize in unusual genre-defying games that challenge the definition of what a game is: Belgian developer Tale of Tales.  They first came on the scene in 2008 with The Path, a non-linear retelling of Little Red Riding Hood, then later released The Graveyard, a depressing old-lady-simulator, and a few months ago put out Fatale which tells the story of Salome from the point of view of John The Baptist’s head.  Odd subject matter indeed so, when they held a Pay-What-You Wish sale last week, I grabbed the lot and tried to see if my logical nerd brain could deal with these highly artistic projects.

I started with The Graveyard, a very short game that takes about five minutes to play through to the end.  Half of that time is spent making a little old lady hobble her way through a graveyard, and the other half is spent listening to a song in German.  I’m proud to say “ I get it”.  The slow-moving character and awkward controls are so that the Player can experience the frustration of being old. As for the song, I had to trust the subtitles; I’m a red-blooded American and therefore I am fluent in precisely one language (The best goddamned language in the world).  The song is about death, and your character has a chance of actually dying in the middle of it.  Okay, I get that too, we could all die at any moment. 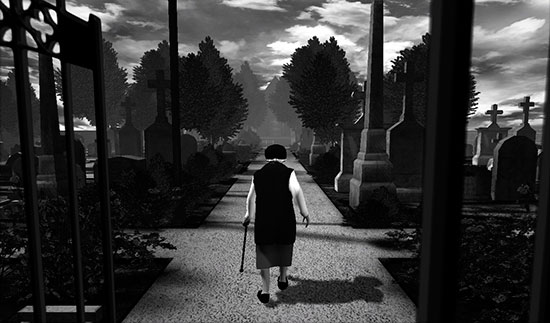 I can safely declare that even the typical Call of Duty fan is smart enough to play The Graveyard.  If you want to try for yourself, there is a free demo which lets you play the whole thing, except your character can’t die.

Next I gave a try at Fatale, which is based on Oscar Wilde’s play Salome, which is itself based on a story from the bible.  Now it was starting to get a bit intimidating; not only would gamers be expected to have some rudimentary understanding of 19th century drama, but we’re also expected to know something about the bible.  Now, because my mind has been forever warped by the 20 hours a week I spend playing murder simulators, I pretty much forgot anything I ever learned about the teachings of Christ.  I’m sure most gamers are equally immoral.  I, however, happen to have be an actor, and was once cast in a production of Wilde’s Salome, therefore I was able to “Get” what was happening in Fatale. 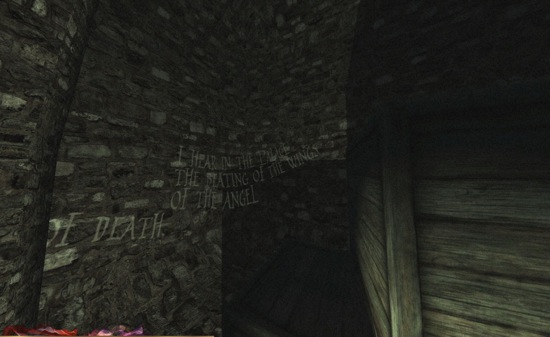 Fatale is divided into three sections.  The first has players controlling John the Baptist as he wanders around a cell waiting to-

Unfortunately, you need to have an understanding of history, or a liking for Oscar Wilde to really grok this one.  However, even if you can’t appreciate it from a literary perspective, Fatale does have a topless woman doing a computer-generated sexy dance.  Anyone who takes a liking to the female Night Elf animations in World Of Warcraft should be able to enjoy this.

Fatale costs seven dollars, but that’s a bargain considering that the normal price for a Salome sexy dance is half a kingdom or a beheading.

Finally I tried the most critically- acclaimed  game by Tale of Tales: The Path.  This one lets you take control of six goth girls and walk to Grandmother’s house. One of the things that threw me off right away was the fact that if you are a good girl and do as you’re told, and go straight to Grandma’s house, never stepping off the path, you’ll lose!  What sort of message is that for young ladies?

Eventually I decided to be a naughty girl and venture off The Path.  After poking around the woods having weird encounters with abandoned chairs, old wells, and rusting cars, I eventually meet The Wolf, who was represented by a teenaged boy.  It turns out that each of the six girls has her own “Wolf”, and I started to get to get it.  The Path holds the same message that came with the original Big Bad Wolf:  “Children should do are they’re told, or something bad will happen to them”. 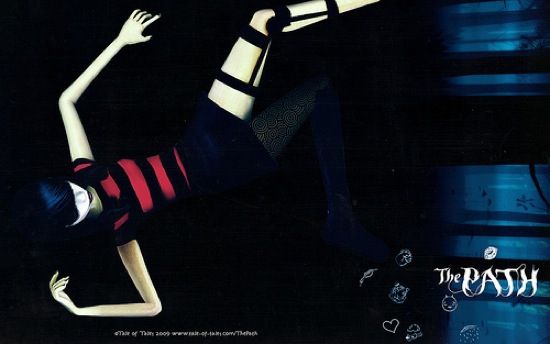 After a weekend of screaming “What the hell?” at my computer I’ve reached the conclusion that PC Gamers shouldn’t be intimidated by “artistic” games.  You might get more enjoyment out of a mindless blockbuster, but your body can’t sustain itself on a diet of junk food, and your gaming brain needs a little nutrition too.

At the very least, you can treat yourself to some “Artistic Nudity”.