In the most recent episode of Arrow, “Huntress Returns," Jessica de Gouw’s Helena is back in Starling City and she's recently cut a deal with the boys in blue that will allow her to pursue a new start. We’re talking witness protection, a new name, and a new life, all for a little blab about the other family. Easy. Simple. Corrupt? It’s possible. Either way, to me it sounds a little too familiar to Cyrus Vanch's recent “release technicality.” It seems you don’t even have to break out of Iron Heights, they simply open the doors for you. But hey, after last week’s action-packed “Dead to Rights” airing, I don’t really mind this plot device.

Anyway, we open with Helena sporting some very sexy leather while interrogating her father’s attorney about his whereabouts. Aw, Daddy’s little stripper; talk about bang for your buck. No, literally, that’s what Gus dishes out while asking the oh-so-sexy, “Is this your first time?” You’d think an attorney would be a little more generous, but I digress. Helena assures him it’s her first and last, and after receiving confirmation that Gus knows nothing she leaves him with a happy ending: her signature harpoon to the chest. She rides away from the scene and right back into Oliver’s life. She approaches him later at his house, and after meeting his current flame (McKenna) his old one threatens to destory his new life if he doesn’t agree to keep her father behind bars. Blackmail from an ex-girlfriend definitely isn’t something to be taken lightly. In my professional opinion, the girl is one swing away from taking a Louisville Slugger to his precious array of bikes. But our hero stays strong and is completely reluctant to agree to the idea. In his words, “It’s not justice,” and he immediately asks Diggle for extra security around his friends and family.

We remember that in the previous episode, Oliver revealed himself to Tommy as “The Hood,” and even if our best buddy wasn’t exactly excited, I did appreciate the backstory regarding Tommy’s anger. It’s more than just a secret, it’s a sequential series of murders that Oliver has swept under the rug and called justice, and Tommy's disappointment is actually understandable. Seems like the writers at The CW have learned from their mistakes with Smallville where fans had complaints day in and day out about the issues with Clark’s hidden identity. I'm not saying that Tommy never earned our sympathy, especially after Laurel lied straight to his face about meeting up with the man in green, but now this? On another note, let’s not forget that the Green Arrow was always meant to be a vigilante, and this reaffirms that piece of his identity. We start to feel tangible tension between Oliver and Tommy. Oliver tells his friend, "I was wrong to think I could have it both ways. That I could do what I do and still have a normal life. With anyone." Thumbs up. Tommy’s anger and frustration is really building, in a rather unhealthy way, and I wonder if his actions will become even darker. Will our best bro go bad?

Meanwhile Laurel and her mother are investigating if Sarah is alive. We know from the last episode that this is a real possibility. In the original series, Sarah Launch becomes the Black Canary (not a well-known character in the DC Universe). She only makes three appearances in three different volumes, and they’re all fillers. With that said, we can't yet say if she’s just part of a secondary story or if she will actually become a caped crusader in Starling City. Either way, they should tread lightly and move slowly; otherwise it’s possible to do too much and completely ruin the appeal of a new character. She’s not a major figure like Deathstroke (who we continually see with Oliver in his flashbacks), but she does inspire hope for a more action-packed, DC-inspired atmosphere. It’s still really unclear, but I hope they roll with it. Speaking of Deathstroke, not much happens back on the isle; our duo steals a circuit from a missile launcher in what Slade calls “leverage.” We see Ollie starting to get a lot more creative with his offshore missions with Wilson, and he slowly continues to grow into the man we see fighting his ex later on. 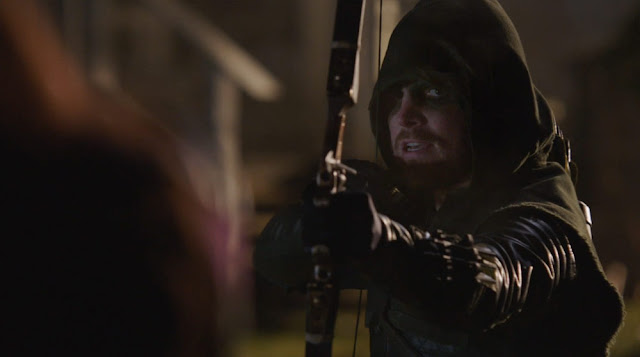 After barely embarking on a relationship with McKenna, the budding romance ends after her “pseudo friend” becomes her red-hooded hero. Sorry, Ollie, but you can do better. We as viewers haven’t really grown attached to the girl, but unsurprisingly Ollie is upset. Queen finally had a normal life in her grasp, and just like that it’s gone. But not unlike our hood in green, he’s willing to give the exact thing he just lost to Helena, and goodbye never tasted so bittersweet with a last, “Get out of my city.” You’d think that was the end, right? Helena then forces Felicity (Emily Bett Rickards) to hack the FBI database and finds where her father’s being kept. When Oliver takes charge in order to stop her, she’s prepared, catching his arrow. After dis-arming him they scrap for a short time until McKenna comes upon the duo of delinquents and asks them to cease. Just as Oliver submits to her demands, Helena fires, injuring her pursuers, and then makes her getaway.

One thing is for sure. Helena’s hot, but I’m not so sure fans are so stoked to see her back in action. It’s a little confusing. She was originally introduced as a driving force to push the action forward, and now that the storyline is finally moving, bringing her back seems to be causing the story to drag, spending too much time on side plots. For that reason, this episode feels like filler instead of an actual episode. Is she just going to be another part of Oliver’s past from which he refuses to break free? Don’t get me wrong; he's a rich playboy, so we expect him to have a lot of pretty exes, but we're left wondering where they're going from here. Where’s Sarah? Will Tommy stay pissed? I'm not really sure, but either way, I'm hoping the Black Canary takes flight soon.