In this week’s episode of Arrow, “Salvation," we see the classic copycat theme brought back to the screen. Before devoted fans get too upset about this unoriginality, we should keep in mind that this is a constant DC theme. It’s a conflict every superhero endures because it makes sense. If the Green Arrow was real and ran around as a hooded crusader (minus the cape) putting away criminals, it would appear easier to become your own version of a Superhero. Kind of a Kickass (credits to the film) mentality. Let's face it: heroism inspires stupid actions, point-blank. It’s every hero’s job to play the credits following an MTV internet clip stating DO NOT TRY THIS AT HOME. And so we are introduced to "The Savior" (Christopher Redman).

What’s his backstory? He’s a pissed off resident of The Glades who goes on a kidnapping and slaughter spree to deliver punishment to those he thinks have done his town wrong. In other words, those he believes have failed his city. If I’m not ringing any bells by now, I'm concerned about your hearing. But there’s a distinct twist to this new character's scheme: he then puts his murders online and claims Arrow as his inspiration. Not that Ollie’s got much of a reputation to save, however I think we can all agree that this new guy has got to be stopped. But as always, right as he’s about to spring into action, Arrow's given just a little bit more information to sharpen his shot. He’s told by Thea that Roy has been kidnapped. To be honest I don’t understand the grandeur of this supposed justice that “The Savior” is meting out. Honestly, what's the big deal? Roy is just your run of the mill thief. Unless robbing grocery stores and stealing women’s purses are now equivalent to homicide, he doesn’t really pose a significant threat to anyone. Wait, I take that back. He did manage to steal Oliver’s girl last episode, so there's that. Either way, if "The Savior" wanted to make an authentic point, he could have kidnapped an elite criminal, or even just someone that actually had some blood on their hands in order to invoke some real sympathy for his plight. Otherwise it just makes me think he’s nothing more than a psycho.

In some aspect Oliver is responsible for the creation of this anti-hero. Although the connection is not direct, the existence of "The Savior" as a vigilante in Starling City illustrates flaws in the justice system. If the city did not require salvation, "The Savior" would be unnecessary. But he’s not alone; let’s not forget that although Helena is mostly caught up in keeping her own father behind bars, she’s still fighting for a similar cause, even if she goes about it recklessly. We see the constant DC motif underlying all three of our leather-bearing comrades (Oliver, Savior and Helena): they have all endured the loss of loved ones. In this way, "The Savior" is no different. Losing his wife and watching Oliver fueled him to direct his anger towards the city. It’s more than vengeance; he’s desperately trying to protect people from the pain he felt by publicly killing off those who commit crimes. 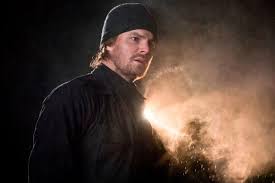 Then something happens that I honestly didn't expect at all. Following his capture, Roy Harper agrees to be put to death by “The Savior."  Once again Roy finds a way to separate himself from your everyday street-thug: after saving McKenna in the last episode, he also feels such deep remorse for his crimes (which are misdemeanors at best) that he’s willing to die at the hands of a man he doesn’t even know. This scene is nothing short of a climatic plateau for his growth not only as a character but for the depths of the human psyche. I can honestly say I was touched. Even more so, we see “The Savior” revoke his sentence of death once he sees this remarkable change, distinguishing him from Queen, who apparently does not believe in second chances. As the scene fades to black at the end of the episode we see Roy inspecting the remains of a broken arrow shaft. The curiosity is reflected in his eyes as he’s cloaked in a red light, and it’s safe to assume that his redemption will involve some sidekick action with “The Hood."

In the original DC series Roy Harper, Jr. is the true identity of our hero’s sidekick Speedy. In the comics, Speedy was known for his exceptionally bright blonde hair, all-red ensemble, gold bow, and of course his speed. Naturally Arrow did not follow the classic background in which he meets Oliver Queen at an archery competition. On the show, Roy not only competes but also stops an attempted burglary by shooting his own bow faster than our hero. I don’t know how believable seeing (this depiction of) Roy Harper picking up a bow is, so I guess we’ll just have to wait and see.  But I’m excited, to say the least, to say that they are beginning to respect the original foundation for our hero, which should reel in some more conventional DC Fanboys. Also, there seems to be more of a focus upon the driving force of the “Undertaking” and the impact of the Glades. These developments are definitely promising for season 2.  Lastly, and definitely not least, this means that my previous prediction about the Black Canary’s appearance is even more likely. So get excited, comic nerds -- there’s hope!