Articles of Horror: Nightmare on Elm St. 1 and 2

In anticipation of the remake of the 1984 classic due in theaters Friday, April 30, Dr. Chris' Articles of Horror will bring you reviews of every one of the original Freddy films. That's right. Every. One. How he's sleeping at night, we don't know.


A Nightmare on Elm Street 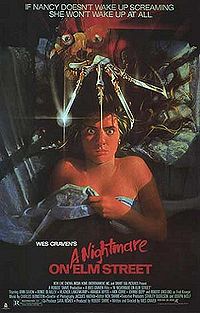 In 1984, director Wes Craven gave us the most popular of the modern-day horror icons, Freddy Krueger. Based on a story he read about kids dying in their sleep do to unexplained events and using the name of a bully who tormented him as a child, he created the child serial killer Freddy Krueger. Freddy was played by Robert Englund, the first film also starred then-unknowns Johnny Depp and Heather Langenkamp.

The plot revolves around Nancy (Langenkamp) and her friends who are having bad dreams about a burnt man with knives on his fingers, slaying them in their sleep. He works his way through each teenager, killing them off in creative ways. As Nancy triesdesperately to save her friends, she uncovers the truth behind a terrible secret on Elm Street. How this boogeyman in her dreams and the adults on Elm Street are connected is beyond anything she could ever imagine.

This was a low-budget film through New Line who was just getting started in the film industry at the time. They needed a film to build a company on. This is why for years New Line was known as the "House that Freddy Built." Robert Englund would go on to become one of the biggest horror icons since Boris Karloff or Bela Lugosi.

The film gave us a villain we could truly both love and hate. Before Freddy, guys like Leatherface and Jason just grunted and groaned. Freddy had personality. He had dialogue, which despite being sick and twisted, was key to his character. Other slashers, such as Jason, just hand mental deficiencies, whereas Freddy was a real-deal pedophile and child murderer. It all adds up to making "Nightmare" the best horror film of the '80s. 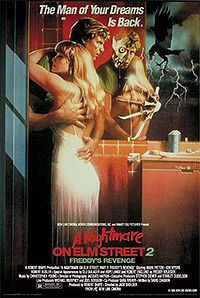 A year later the studio rushed into production on "Part 2." Now what or who is Freddy getting his revenge against, exactly? Nobody from the first film except for him is even in it. The plot revolves around a teen and his family who move into Nancy's old house and Freddy takes possession of the boy's body to start his killing spree again. Many people die and with the help of his girlfriend through the power of love he is able to defeat Freddy. This entry is the weakest for many reasons. One, Wes Craven did not want there to be a sequel and two, the idea that Freddy uses someone else to commit his killing spree instead of himself lost the fans pretty fast. The only good thing about the film is Robert Englund's returns as Freddy Krueger.

You could skip this movie and go right to Part 3, which will be in our next review.