Assassin’s Creed has always been about the lone, hooded assassin, moving silently across the rooftops of a bustling city, stalking his victim, waiting for the perfect time to strike. No matter how large the consequences, each game in the series came down to the actions of one man and one man alone. After nearly three years of development, (the longest of any iteration of the game) Assassin’s Creed 3 is the largest and most ambitious title to date. From the sprawling wilderness to the newly formed cities of Boston and New York to the Atlantic Ocean itself, Assassin’s Creed 3 has taken gamers away from the clustered streets of previous titles and thrust them into the wide open world of colonial America.

Assassin’s Creed 3 follows a Native American assassin named Connor from childhood to adulthood. He’s propelled into many situations from colonial American history: The Tea Party and the Battle of Bunker Hill being memorable instances, with plenty of familiar names tossed in along the way. As always, the writing for the game is top-notch but Connor lacks the charm and charisma that made Ezio such a lovable character. He and the other colonialists never really come off the screen, so to speak, as characters from the previous titles did. The case could be made that colonial Americans were not as flamboyant as their Renaissance ancestors. Either way, I never felt the connection I had to the characters from the previous game.

The story missions also progress in a way that can be disjointed, essentially moving you from one set piece to another. You’re sometimes confined to strict guidelines during a mission, which can occasionally be frustrating as you continue to fail because you didn’t follow directions to the letter. The missions also make Connor feel like a follower instead of a leader. He’ll run from one place to the other, doing whatever is asked of him. Essentially, Connor says “how high?” whenever an important character from American history tells him to jump. After experiencing Ezio be his own man for three games, it was a little sad to see Connor devolve into a peon with a hatchet. Cutscenes are also constant, making Assassin’s Creed 3 feel like a Metal Gear Solid title. They pop up too early as well, throwing the pacing of the game for the loop and leaving me scratching my head. However, once he is unleashed upon the world, free to roam and do as you please Assassin’s Creed 3 shows why it’s one of the best games in the series. 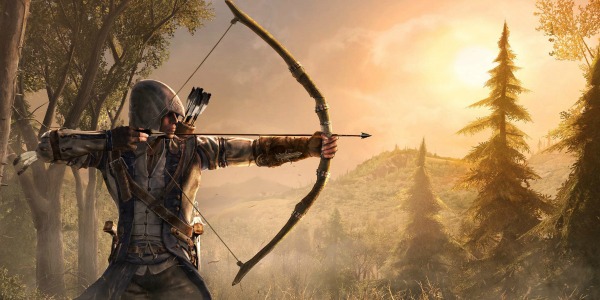 Opening the game map reveals a huge amount of space for you to wander through. Each area is roughly the same size as cities from previous games, with varying degrees of successes and failures in that aspect. The wilderness is a wide open place, full of wildlife for you to hunt, trinkets to find and frontiersman to hear tall tales from. You can also manage your homestead, much like Monteriggioni, sell your furs to traders and help travelers in danger in exchange for their various services. Although it is full of activity, the wilderness can be too big at times. Traveling on foot is not recommended but neither is riding a horse, as they’re slow and can get stuck between trees or rocks. You can fast travel but only to places you’ve found and unlocked. The tedium of traveling is hardly something that brings the game down but it’s definitely a nuisance when the mission you want to access is on the other side of the map, far away from a fast travel location.

Boston and New York are far different beasts than both the wilderness and the cities from previous games. Each city is alive with activity. Vendors try to sell you their goods, town criers shout out news from cities afar, orphans hassle you for a coin and various domesticated animals wander freely through the streets. Each city feels lived-in, like it was there before you began the game and it’ll be there after you’ve left. The only thing missing from each place is the verticality that has always been a staple of Assassin’s Creed games. That’s not saying there aren’t tall buildings for you to climb. There are a number scattered around for you to traverse and survey the scene, however, the cities as a whole seem more flat than tall. This is especially noticeable during free running. No longer will you be able to scale a building and disappear easily. Each escape requires the utilization of different tactics than previous games and in the beginning it can be plenty frustrating.

Less frustrating is the open sea, where Assassin’s Creed 3 deviates the most but shines the brightest. The ocean is a living organism, making you deal with rogue winds, crashing waves and enemy ships. The feeling a navigating your ship through churning waters, while keeping the wind at your back and lining up a perfect cannon volley is as exhilarating as it is demanding. Each maneuver must be precise, or you’ll find yourself eating cannon fire from opposing ships or ramming you own ship onto the rocks. Naval warfare is one of the most satisfying things in Assassin’s Creed 3 but it’s a shame there aren’t more missions for it. Although you can put a lot of time and money into your vessel, making it close to unstoppable, the lack of extra missions is a disappoint for such a great addition.

Assassin’s Creed 3, and the series as a whole, is all about the side missions, which are a great change of pace from the streamlined story missions. Each area of the map has a plethora of things to occupy your time with. Hunting brings you pelts and bones and vital organs for you to sell in the cities. The cities give you a chance to tangle with Redcoats, incite riots or chase after the missing pages of Ben Franklin’s almanac. The open sea has you fighting pirates, protecting vessels or seeking out treasure of famous pirates long forgotten. The side missions may be the star of the show but some are executed better than others. As with any game as large as Assassin’s Creed 3, everything can’t be perfect. Some of the side missions just feel tacked on for the sake of something to do, making Connor feel like an errand boy instead of a top notch assassin.

The combat and free running is largely unchanged from previous games but feels tweaked to perfection in Assassin’s Creed 3. The parry and counter system has been simplified to an almost too easy extent, but the brutality and violent nature of the finishing moves make each fight as satisfying as the next. Free running has been streamlined to a single button hold and Connor is the nimblest of assassins, making gliding through the forest or over rooftops seem like a breeze. There are some problems when reaching the ground, though, as Connor can get caught up on a random pole or branch, or stuck peeking around a pile of boxes, stopping his momentum instantly. This is frustrating and can sometimes hinder your escape or make you fail a chase sequence.

I never found myself drawn into the multiplayer of Assassin’s Creed before this game and it is a welcome change of pace from the single player mode. Manhunt will be instantly familiar to veterans of previous Assassin’s Creed titles, as you stalk opposing team members who try their best to blend in and kill you back. The cat and mouse aspect of it all is gripping and trying to act as close to AI as possible is as tough as you’d expect. Wolf Pack is a mixed bag, depending on whom you play with. Up to four players join to assassinate targets spread out across a map, with each assassination ramping up in difficulty as you progress. Think Horde Mode Assassin’s Creed-style. Domination sees you capturing and holding three areas on the map from other players. Deathmatch and capture the flag are thrown in as well and don’t deviate from what you’d expect. All of these modes give you Abstergo Credits, which are basically XP points used to upgrade your character. The inclusion of a storyline featuring Abstergo rounds things out while tying a nice bow on the whole multiplayer package.

Assassin’s Creed 3 is not perfect, and that’s perfectly fine. If you can look past all the gripes I’ve discussed so far Assassin’s Creed 3 shines. It’s a game with a tremendous amount of content, with plenty of in-game activities to occupy yourself with, as well as a multiplayer suite that keeps you coming back for more. If you’re wondering why I’ve not mentioned Desmond and the present day storyline, it’s because I’d rather not spoil something that has been building to a crescendo for nearly five years. Do yourself a favor, get Assassin’s Creed 3; it’s worth it.