The best way to define Assassin’s Creed: Revelations is by saying that it is another Assassin’s Creed game.  One of the main questions on everyone’s mind was whether or not the amount of changes from AC2 to AC: Brotherhood would be consistent in the changes made from Brotherhood to Revelations. In both cases, the development time was about a year, but unfortunately, the changes between Brotherhoodand Revelations are not as apparent.  With Brotherhood, the changes that they made were amazing.  Brotherhood was the first game where you could recruit assassins to your cause and use them, either to take out guards or take on missions abroad.  This system worked incredibly well, and the ability to call an assassin to take out an unsuspecting group of guards never got boring.  In addition, the inclusion of a competent multiplayer mode made Brotherhood easily worth the $60 price tag. 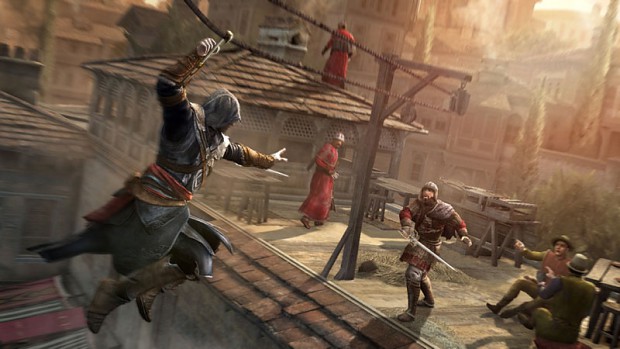 Ziplines are one of the few new additions to Revelations.

Revelations is a very different case.  While it does have all of the elements that made Brotherhood special, the changes that it makes from Brotherhood seem negligible by comparison.  The changes that have been made can really be categorized into two groups: a bomb making system and an improved Templar den capture/defend mechanic.

The inclusion of bombs is certainly not a new system, but bomb making has become a much larger part of the game in Revelations.  Many of the chests that you find across Constantinople (the main setting of Revelations) will contain “supplies” which can be used at bomb crafting tables across the city to make one of three types of bombs: lethal (which are used to kill guards), tactical (which are used to incapacitate guards), and diversion (which are used to, you guessed it, divert guards' attention).  Each of these types of bombs consist of a casing, which can be anything from a shell that will explode upon impact to a tripwire shell, a type of gunpowder, and an effect.  With multiple types of each casing, gunpowder, and effect, the variety of bombs is quite extensive, but throughout the game I found myself sticking to the traditional sword or hidden blade and hook blade.  The hook blade is also a new component, which allows you to use zip lines throughout the city and gives you the ability to climb buildings faster, but it did seem like the buildings themselves in Constantinople were much taller than previous cities’ buildings, so the amount of time climbing is roughly the same. The hook blade still allows for double assassinations, but I felt the need to double assassinate much less than in Assassin’s Creed games of the past.

This is your new assassin buddy, Yusuf Tazim

Another main change in Revelations is the inclusion of a deeper Templar den system, mainly due to the fact that Templars can now recapture dens that you have taken.  If one of your dens gets attacked by the Templars, you enter into a tower defense type of mini game to win the den back.  Personally, this seems like a very odd inclusion, as the tower defense isn’t done particularly well, so what I often found myself doing is just letting the Templars contain one of the dens, which seems to be enough to satisfy them.  Another annoyance on the Templar den side of things is there are now cowardly den leaders, which will escape if they notice you.  If this happens, you have to wait an in game day (roughly 20 minutes or so) before they return to their post and you can try to take over the den again.  This proved to be more of a nuisance than anything, as the punishment for not catching a cowardly den leader seems a bit extreme.

Assassin’s Creed games are nothing without the story, and while the campaign in this iteration is a bit of a slow burn at the beginning, the last third or so of the game makes up for it.  Enough happens in the story to make it crazy in the end, but the fact remains that, at least until the end, this story seems like a one-off that doesn’t have many implications on Desmond’s story as a whole. Also, I want to call out Ubisoft for saying that you “play as both Ezio and Altaïr”, because while this is true, the Altaïr sections are largely separate missions presented through a type of flashback that 1) only take place is Masyaf, and 2) never last more than 10 to 15 minutes.  The real split between Ezio and Altaïr gameplay is probably about 98-2 in Ezio’s favor; a fact that I found to be a bit misleading in a title which was advertised as a game where you could play as both.  There are a few additions to the multiplayer, but for the most part, it remains largely unchanged from the multiplayer found in Brotherhood.

Oh if only you had appeared more...

Revelations is a very hard game to recommend to those who have not played any of the other Assassin’s Creed games, and is even a bit hard to recommend to those who have.  While the gamplay that made Assassin's Creed famous does return (with a $60 price tag), the amount of new content doesn’t seem enough to justify the game over Brotherhood or AC2, which can be found for much cheaper.  The end of Revelations does lay the foundation for the next Assassin’s Creed game (which is to be released next year), but if you have not played Assassin’s Creed 2 or Brotherhood, I would recommend that you check them out before you delve into Revelations.