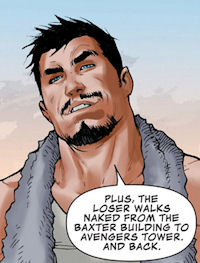 Avengers Assemble is an odd duck in this whole Marvel NOW! thing. It’s officially not part of it, but for all intents and purposes, it is. What is Marvel NOW! other than new creative teams taking over books? The only difference is that Avengers Assemble doesn’t get a relaunch, so Kelly Sue DeConnick and Stefano Caselli get to start their run here with issue nine. As a result, it will be buried by all the relaunches going on, and that will be a shame. This is actually a very entertaining start to their run.

DeConnick’s opening story hinges on what is basically a pissing contest between two of the Marvel Universe’s biggest brains, Tony Stark and Bruce Banner. Both characters are portrayed well with their different personalities clear and natural. DeConnick’s Tony is very smug and flippant, going so far as to reference shooting the Hulk into space in the same manner someone might mention a practical joke they had once played on you. The behavior suits him just as Bruce’s more calm and somber personality does him.

One thing that throws me off about all of his is Bruce’s presence, though. I know the Hulk appeared in Brian Michael Bendis’ story arc, but is Bruce casually hanging out with the Avengers a thing now? I know, I know. Avengers Assemble is primarily meant to appeal to the movie audience. But I also know that this is primarily being read by the same old comic fans, and as one, I’m a bit confused by Bruce Banner seemingly living at Avengers Tower like that’s nothing unusual.

Avengers fans who might miss the witty, entertaining interplay between characters from Bendis’ run will find themselves right at home here. DeConnick keeps the comedy coming but also keeps it at a level preventing this from turning into a superhero sitcom. Oh, it gets close. But it doesn’t quite get there.

This is definitely going to be a personality-driven series under DeConnick, because the plot clearly takes a back seat to the character dynamics. It’s just an excuse to get them all together and bouncing off one another. That’s not to say there’s anything wrong with the plot. It’s fairly straightforward. The Avengers are investigating something that seems to be part Alien/part the Thing. For the purposes of this issue, that’s good enough.

Since Secret Warriors ended, I’ve been saying that Caselli needed to get on an Avengers book. I’ve been wanting to see him really draw the team, and I’m not disappointed. I’ve really come to like his style, and it really suits the tone of storytelling that DeConnick is going for. Seriously, his depiction of Hulk making Spider-Woman a sandwich says it all about how well these two work together. Still, I’m not sure I understand what’s supposed to be going on with Captain Marvel’s hair. Does she have some kind of luxurious mullet now or something? There’s just something strange about it. But then again, he's hardly the only artist to seem unsure about what Carol's hairstyle is supposed to be.

If I have one major problem with Avengers Assemble, it’s that I really don’t understand what this book is supposed to be. I’m not a big fan of redundancy, and I usually prefer books to have a premise of their own. I’m unclear on what Avengers Assemble’s premise is. We are about to have Avengers by Jonathan Hickman coming out twice a month. We’re about to have New Avengers star the Illuminati. We have Uncanny Avengers combining Avengers and X-Men. Secret Avengers is going to continue to be secretive. So, what is Avengers Assemble? What are we doing here? Is this just going to be another Avengers book with the vague distinction of trying to appeal to movie fans who have already turned their attention elsewhere?

This gripe isn’t directed at the creative team. If anything, it’s in their defense. DeConnick and Caselli deserve better than a book with an ambiguous point overshadowed by Marvel NOW! relaunches. Don’t get me wrong. I enjoyed this issue more than any I read of Bendis’ previous issues on Avengers Assemble. But I can’t help feeling this isn’t really an ideal use of all the talent involved.