I vaguely recall a failed attempt at an Avengers cartoon ten years ago.  That time they only used B-List Avengers characters like Wonder Man, and the thing got cancelled after six months.  When I heard about Avengers: Earth’s Mightiest Heroes, I was apprehensive.  I was even more concerned when I saw the cartoony character models, and feared we were in for another Super Hero Squad (Not that there’s anything wrong with Super Hero Squad… if you’re eight years old).  Fortunately, the storylines are aimed squarely at grown-ups and teens, even if the designs and violence levels are kid-friendly. 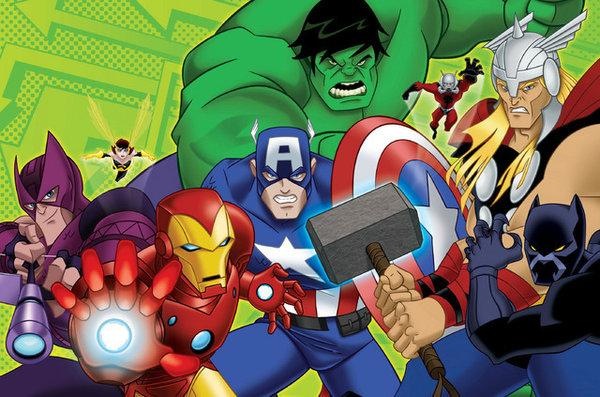 We see a lot of “Dart Guns” being used, no one is ever shown getting killed, and you can’t expect Hulk to eat anyone like he does in The Ultimates, but the stories are complex and very well-written by the standards of superhero cartoons.  The first season has a long-form story that ties all of the episodes together; some shadowy ultra-villain has arranged a mass break-out at all of S.H.I.E.L.D’s super prisons, which results in dozens of super villains on the loose.  In order to deal with the situation, Iron Man has to recruit a band of mostly reluctant heroes which include The Hulk, Thor, Hank Pym, and The Wasp.  Eventually Captain America, Black Panther and Hawkeye join up too.  Black Widow is around, but I won’t spoil her storyline for those who haven’t been watching.

All of this develops slowly over the first half of the season, using a good pace.  Mercifully, the producers did not try cram all the characters together by the end of the pilot episode. This pacing means that every hero gets a solid introduction before they all team up to punch things.  Hulk, Thor, Iron Man, Panther and Cap all get at least one full episode devoted just to their backstory.  It’s great to finally see a good weekly cartoon incarnation of Captain America. I’m a Red-Blood American who eats terrorists for breakfast and craps eagle eggs, so I hope to see a lot more of him in the second season (Which the show certainly deserves). 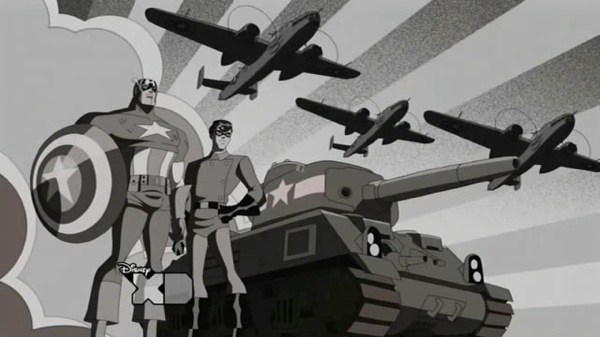 There are guest appearances by assorted Marvel characters, like Nick Fury, Captain Marvel and Mockingbird, but there’s no mention of other Marvel Superteams like the Fantastic Four or X-Men.  Attentive viewers might have noticed that Wolverine does have a very tiny cameo.  It comes during a Captain America story set in World War II, and there are a few quick shots of Logan in his pre-wolverine days.  Despite this, the show focuses on the Avengers, which is a much better choice than making the series a Marvel Universe showcase.

The long-running story is handled by Story Editor Christopher Yost who has worked on most of Marvel’s cartoons in the last eight years, as well as some of the X-Men comics.  Fans of Yost’s previous work will probably like the direction Avengers takes. There is a good dose of humor in the writing; Thor and Hulk have Alpha Male banter, and Iron Man is full of quips about how hard it is running the team.  Wasp is way too excited to be a superhero, while Hank Pym is depicted as too nerdy to care about stomping villains.  M.O.D.O.K, the giant floating head, pops up sometimes to ad a dose of silliness to the proceedings as well.  The humor is only used appropriately, though. It's there to break tension between action scenes, not to turn enemies into buffoons, or force a light tone onto the serious business of fighting evil. Individual episodes occasionally degenerate into “Let’s all gang up on the giant monster”, but the Avengers usually have someone interesting to fight, with a compelling reason to do so.

Animation isn’t all fancypants, but it does the job, and a few episodes have some great action sequences, like one shot which follows Hawkeye's arrow as it zooms through a big battle.  Another episode has a great shot of Black Widow's shadow preceding her as she walks down an alley.

The character designs are, as I said, kid-friendly.  This sometimes results in incongruous styles; most of the male, human characters are drawn in a realistic manner, but monsters and robots tend to be a bit googly-eyed.  The female characters are often anime-inspired, and Wasp looks like she belongs in an entirely different cartoon. The effect is a clear indication that they're trying to not make anyone look too menacing, so as not to frighten younger viewers.

Regardless of these complaints, Avengers: Earth’s Mightiest Heroes is doing a great job of entertaining kids and grown-ups.  While it doesn't compare visually to some of the recent animated feature films put out by Marvel, the writing is quite good.  The first season isn’t over yet, but it is definitely worth catching up on in re-runs before the final few episodes air in January.  A second season hasn’t been announced yet, but the show absolutely warrants one.  Read our review of the rest of the season HERE.