Why do I love Captain America?  This episode of Avengers is why.  Cap may have peak human physical conditioning, and a Vibranium shield, but his real super power is delivering inspirational speeches.  I’d follow that man to the Gates of Hell after watching this episode!

Take for example the opening scene where Hawkeye is trying to pull off a difficult trick shot.  While the rest of the team teases him about how impossible the shot is, Cap encourages him with “I’ve never seen you miss before; I don’t expect you to start now”.  The man’s exactly who you’d want leading your team when the aliens invade, or the robots run amok, and I’m wondering how long it will be before he challenges Iron Man for top spot on the team. 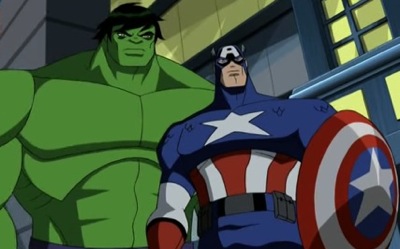 Then there’s the later scene when Cap and Hulk are smashing Hydra robots.  Not only does Captain America show that he can take out a giant robot, without needing super powers, but he also belts out a speech that even inspires the Hulk to realize his true potential as a hero.

As the episode resolves, and we learn that Captain America had the chance to remake the world any way he desires, and the one thing he wanted was actually a wish for someone else.  Those of you who have read Ed Brubaker’s run on the Captain America comics will know where the Bucky reference at the end of the episode is going, and anyone who watches the Avenger cartoon without following Marvel in print is in for a great storyline if the show incorporates Brubaker’s work from the past few years. 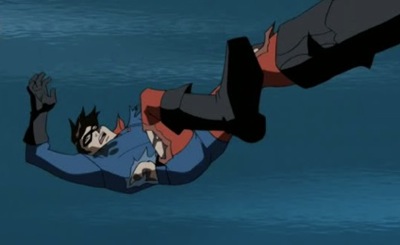 Even though this was a very Cap-centric episode, the rest of the team gets lots of things to do as well.  Hulk, in particular comes across extra-awesome, especially since the show is blending elements of the Ultimate Universe with the regular 616 continuity.  In the Ultimate comics, Hulk is a little more “Gritty and Edgy” than in the older Marvel universe.  And when I say “Gritty”, I mean that Ultimate Hulk is a cannibal who slaughters innocent people by the hundreds.  It’s nice to see the animated version of the character giving a little reference to the nasty Ultimate Hulk, with the line about him eating Black Widow.  They even found a way to turn it into a joke in the scene where Wasp points out how funny it is that everyone is afraid of the Hulk.

Hank Pym comes across well in this episode, showing off his Giant Man powers by ripping a Hydra ship right out of the sky, and the animators finally got around to using the classic Avengers move where Ant Man hangs onto one of Hawkeye’s arrows.  The animation in that sequence is truly impressive, with a long backtracking shot to show how hard the show will be, before showing Hawkeye actually make the shot.  This is a subtle bookend to the scene in the beginning of the episode. 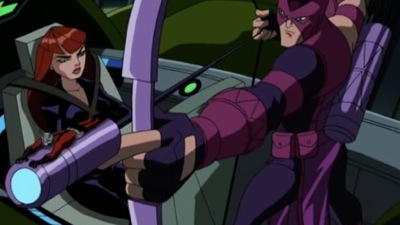 The episode boils down to one long action scene, yet the writers still manage to fit a lot of story and character development in between all of the fighting. Hail Hydra does a lot of work in expanding the running story of the show, and introducing possibilities for subplots, such as S.H.E.I.L.D. wanting to register all of the superheroes.  Marvel fans know that this is what lead up to the big Civil War crossover storyline from a few years ago, and it certainly seems like that’s where the producers are trying to take the Avengers at some point in the future.  This is one of my favorite episodes of the series so far.

Read our review of the two-part storyline Ultron 5 and The Ultron Imperative.