Dark Reign turned out to be the crown jewel of Brian Michael Bendis' Avengers era. Early on, he had struggled to find his footing as a blockbuster superhero writer. After Civil War, he found it and began climbing. And then after Secret Invasion, he reached the mountaintop, where he could look down on all those skeptics who doubted he could hack it as an Avengers writer. 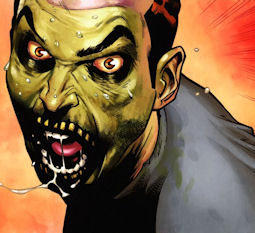 The elevation of Norman Osborn to top villain status in the Marvel Universe was a strange thing. This was a villain who typically only troubled Spider-Man. Frankly, he was also a character who had been utterly worthless since his ill-advised resurrection a decade earlier. But at the same time, it was very topical for the times. Here was this rich, corporate scumbag being rewarded instead of punished. It was a dramatic parallel to what people were hearing on the news all of the time with corporate bailouts, golden parachutes and regulatory appointments. Appointing a former supervillain to oversee the superhero initiative wasn't too far off appointing a former hedge fund manager to a banking oversight committee.

Bendis has always been very open about the debt he owes to Warren Ellis for this. It was Ellis who salvaged Norman Obsorn as a worthwhile character again in Thunderbolts, and Bendis' Dark Avengers was a pretty obvious direct continuating of that Thunderbolts run.

I admit I wasn't down with the premise of Dark Avengers at first. It seemed silly. Then, I realized I was thinking about it too rationally. Osborn wasn't rational, so why was I expecting his Avengers to be? It didn't take me long to embrace Osborn's crazy and enjoy the ride. Although, I was never really thrilled with the actual cast of the book. It seemed like more fun could have been had with it. Ultron could have been rebuilt as the pale Vision. Bendis chose to kill Swordsman despite the character being a natural fit for the team. And there were other obvious oversights like the evil Thor clone-bot in the basement of Eric O'Grady being used as Ant-Man in Thunderbolts rather than Yellowjacket there. Plus, Bendis barely seemed to care about half the cast he did have in the book. I think he was less interested in Daken than even I was, which is really saying something.

On that note, thank you very much Rick Remender.

Despite all that, the part of the cast Bendis was interested in writing more than made up for any misgivings I had about Dark Avengers. It was the Norman Osborn show with Ares and Sentry as major supporting players. And good lord, was it awesome. Osborn may be played out now, but back then, his crazy jew-fro was on fire. He was not a well man. He knew he wasn't a well man. But he also believed he was the hero of the story. What made his overaching story so compelling was that, in some ways, he actually was. The Dark Avengers weren't buffoons and weren't pretending to do heroic things. The world did get saved a few times, and that made it all the more interesting to have such evil or disturbed people behind it.

This was also when Bendis really pulled the trigger on what he had been brewing with the Sentry for so long. The character really hadn't been much of a presence until Dark Reign started, and his slow creep from the background to the foreground really paid off. The big ball of dangerous psychosis that was the Sentry was no longer an issue that could be ignored, because he was now under the guidance of someone with a big ball of dangerous psychosis of his own. The kindred spirit angle Bendis hit on between Osborn and the Sentry was one of the strongest story elements of the time. It was interesting to see Norman Osborn kind of succeed where Tony Stark and Steve Rogers had failed. They couldn't truly understand the Sentry. Osborn did, and Bendis played it to great effect.

Ultimately, this cemented my opinion that Bendis' take on the Sentry was better than Paul Jenkins'. The Jenkins Sentry gave us Superman in the Marvel Universe in a way that lessened the actual Marvel heroes, regulating them to his inferiors in nearly every way when he was around. But the Bendis Sentry only had that potential to him. Instead, he was a hero on the verge of that kind of greatness if not for being a ticking timebomb of crazy. The message of the Jenkins Sentry seemed to say that Superman would outshine everyone in the Marvel Universe until being ruined by it. The message of the Bendis Sentry, which I obviously found more appealing and pro-Marvel, seemed to say that not only did the Marvel Universe not really need a Superman but it was perhaps better off not having him around at all.

As soon as Bendis debuted the Illuminati, people were talking about a villainous counterpart to it. Bendis wasted no time getting to it either. With Dark Reign came the Cabal, and things got off to a strong start. Bendis chose its members wisely. Norman Osborn worked perfectly as the person crazy enough to think a group like the Cabal could work. The presence of Dr. Doom and Loki gave the group legitimacy. An upstart like the Hood provided the necessary fresh blood. And he rounded it out with two semi-heroic characters, Namor and Emma Frost, to make things interesting. However, the Cabal as a group didn't amount to much as things progressed. Namor and Emma Frost's roles fell flat with the only thing even resembling a payoff to their involvement being Namor joining the X-Men. Taskmaster awkwardly joined for about a minute before it all came crashing down. The Cabal served as little more than a platform for Loki to play games with Osborn and the Hood, which was interesting enough in its own right. But as a concept, the Cabal never quite lived up to its strong beginning.

Dark Reign allowed New Avengers to maintain its identity as the underdog, renegade team of Avengers. Little changed in that respect, but it was a good case of not fixing what wasn't broken. It did begin to feel less like Luke Cage's Avengers, though. This had to do with Bendis making more use of Clint Barton. Between the return of his ex-wife Mockingbird and the whole Dark Avengers situation, Barton's character began taking the lead of the book at least as equally as Cage had it. This worked well, because it felt like a natural progression of the story being told. With Captain America, Thor and Iron Man basically unavaiable, Bendis put Barton in the role of The Avenger. He, more than anyone else, was there to take what Osborn was doing to the Avengers personally, and it was a great role for the character.

Bendis also chose this time to really tackle the magical corner of the Marvel Universe in New Avengers. I guess he just didn't feel like he had enough challenges on his plate already. In dealing with magic, Bendis began doing something so simple yet so freaking brilliant. It was amazing. He cited spells. When a character threw magic around, a citation was included stating exactly what the spell being used was. I know it doesn't sound like much, but to me, it was revolutionary. See, the thing about magic in superhero comics is that it usually sucks. Don't even try to argue with me about that. It's the truth. You will see some of the laziest writing in comics when magic is involved. It's typically treated as handwaving nonsense, which a lot of writers don't even attempt to disguise. But with the simple act of providing magical citations, Bendis gave a sense of structure to it. 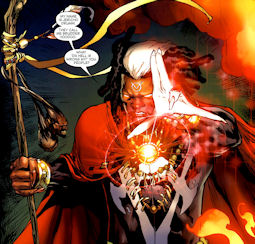 The meat of Bendis' dip into magical territory was the search for a new Sorcerer Supreme. This accomplished two major things for him. In a bid toward diversity, it elevated Brother Voodoo to a major role in the Marvel Universe as the new Sorcerer Supreme. Ultimately, this wouldn't work out when Marvel tried to put him out there in his own book, but at least the effort was made. The second thing this accomplished was to give Bendis a another chance with Dr. Strange as a member of the team, and this time it came without the baggage of trying to accomodate the Sorcerer Supreme in a team setting. Now, he was working with a Stephen Strange with new limitations and fans would be less inclined to whine about the character not handwaving away all the team's problems. 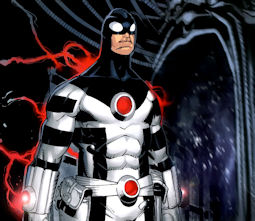 Though Dark Reign was Bendis at his best with the Avengers, not everything he did was golden. There were some things that just did not work from beginning to end. But these were minor in the grand scheme of what was going on at the time. Much to some fans' disappointments, Bendis really had no feel for writing Moonstone or Bucky Barnes in their respective team books. But the character who got it worst was probably Noh-Varr, another relatively obscure new character Bendis shone the spotlight on during his run. Noh-Varr, formerly Marvel Boy, became the Dark Avengers' Captain Marvel and then simply the Protector with a painfully boring black and white costume to match that bland identity. Early on in an interview, Bendis stated he felt it was time Noh-Varr grew up, which is likely the root of everything that ended up going wrong with the character. That is like saying basically this: "You know that thing that makes the character interesting? Yeah, let's not do that anymore." So it was that Noh-Varr lost most traces of his personality. Even Bendis seemed to lose interest in him, causing Noh-Varr to awkwardly sit out most of Dark Reign.

Still, a few duds like that did little harm what was otherwise turning out to be Bendis' high point in his Avengers career.

Dark Reign culminated with Siege, the event I consider to be Bendis' best. Where Avengers Disassembled was rushed and chaotic, Siege was built up to and organized. Where House of M was not fully thought out and hollow, Siege was packed with a plan. Where Secret Invasion was stretched too thin, Siege was to the point. This was an event that knew exactly what it wanted to be and stuck to it. There weren't even shocking and unnecessary character deaths, which Bendis and other writers have been rightly criticized for in their events.

Oh, I know some criticized Siege for having shock value deaths too. But seriously, there weren't any. If you were shocked by the deaths in Siege, you must be surprised by sunrises too. Marvel came out and told us beforehand that three would die in the vent, and from what I saw, most had them guessed correctly. How? By guessing who would make sense for the story, which is all you can fairly ask for when it comes to character deaths.

Siege wasn't just the end of Dark Reign. It was the end of the whole Disassembled Era of the Avengers. This was the reunion of the Big Three. Captain America, Iron Man and Thor hadn't been united since Bendis began his run with the Avengers. Siege brought them back with all the splintered, heroic Avengers teams united behind them. And the Sentry, the Superman of the Marvel Universe who thematically filled in for their absence, fell to make way for their return. The Dark Avengers, the mockery of what they had been, was beatened and exposed. Siege was essentially Avengers Reassembled, and it was a pretty great conclusion to all Bendis has done since taking over.

Or, it should have been a pretty great conclusion.

Because next comes the Heroic Age, much like those television shows that go on a season or two longer than they should have.