I am sad to see that this is the last issue of Avengers The Children Crusade. The past 9 issues have been great and this is one of my favorite stories from the past year and half. It brought a lot of the Marvel Universe together with interesting story.

The cover for this issue was great it really summed up the whole mini series. We get to see Avengers, Scarlet Witch, Dr. Doom, Young Avengers, and X-men. All of these characters and teams brought a vital role to this series. I also love Jim Cheung’s art. He did a great job with the interior art and their no exception of the great work he did for the cover.

In this issue we get to see where we left off from last issue and that was Cassie’s death. We get to see how people react about her death, especially a big reaction from Iron Lad. In this issue one of the main problems still is where Scarlet Witch belong and if she should be punished for what she did on M-Day. 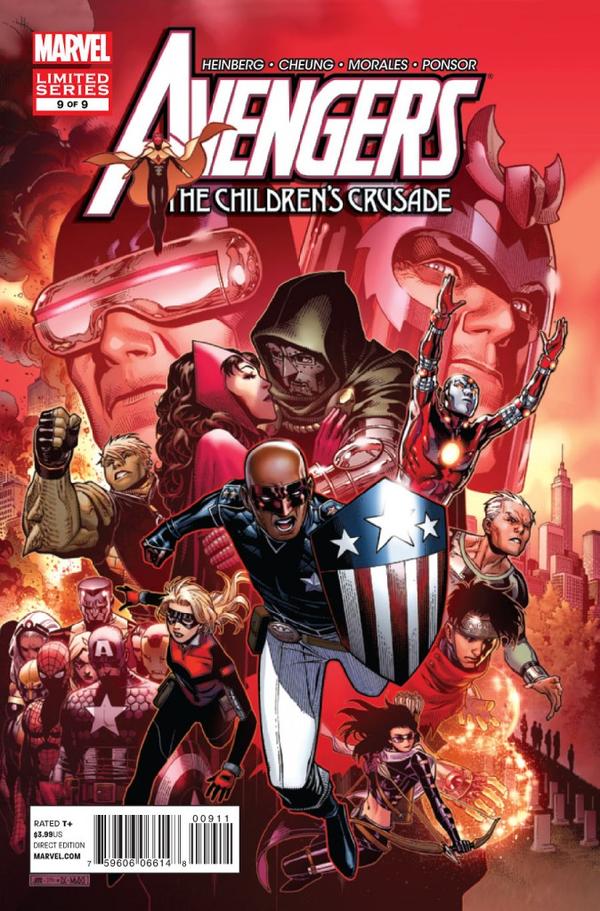 This is one of my favorite issues from this series and one of my favorite issues that Marvel has released in a while. We finally have a big event where a lot of things happen and there is great story to back it up. We get a lot of cliffhangers in this issue that I hope we get to see resolved soon. It would be disappointing if we do not get to see the Young Avengers for a while, but after the success this series has had I do not think this will be last we have seen of them.

My favorite part of this issue had to be the ending especially for fans of the Young Avengers since the beginning. They mention how in the beginning the team never belonged and the Avengers never thought the Young Avengers could be Avengers. But after the events of this mini series they have proved themselves to be Avengers. The Avengers had even made a monument of Cassie, Ant Man, and someone else who died in this issue, which I will not mention.

I would say pick this issue up. It was a great last issue for the mini series. There are a lot of great cliffhangers in this issue. I hope to see how the Young Justice story continues, but the question is how long will we have to wait?