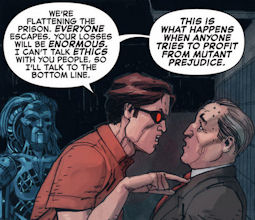 I have to admit something here. My first impression of AVX: Conesequences was that it was an unnecessary aftermath series for what had already been an unnecessarily drawn out event. Just another cheap grab for cash, as we had already witnessed from Marvel recently with Fear Itself.

So imagine my surprise when AVX: Consequences turns out to be a far superior story to Avengers vs X-Men.

In this, Kieron Gillen presents us with a far more intelligent take on the events of Avengers vs. X-Men than we got in that event itself. It’s bittersweet in some ways, because it shows some of what we could have gotten had Marvel editorial been more interested in substance than flash with the event. Well, there’s no silliness with the Phoenix, the Iron Fist or much else extraneous crap here. This is Cyclops willingly making a martyr of himself and his reputation in the face of a world that would rather cast him as the villain rather than own up to its actions against mutants.

Cyclops’ development over the past decade has been one of my favorite things about the X-Universe. When I started reading X-Men comics, I was always annoyed with how Cyclops got stuck in the role of the boring boy scout that the “cool” characters like Wolverine and Gambit bounced off of. Cyclops is and always has been the X-Man. It felt like it took forever for Marvel to start to realize this and that the guy who Professor Xavier trained from childhood to be a leader should be pretty damn badass.

Also, killing off Jean Grey to free Cyclops from the perpetual and stupid Scott/Jean/Logan love triangle helped too.

One of the facets I’ve enjoyed about Cyclops and one I think Gillen really grasps is that he’s a pragmatist. You don’t dream your way toward achieving a dream. Someone with a vision has to see it through and make the real decisions. Cyclops, obviously. AVX: Consequences puts him in the position of where he thinks he has seen it through. For his part, at least. He united mutantkind and prevented their extinction. He protected the Mutant Messiah and set up the revival of the mutant race. Now, he’s willing to have his last act be taking the fall so the world can heal from the Phoenix’s rampage.

Throughout this series, Gillen has done a good job of skirting around the major flaws of Avengers vs. X-Men. All of that junk trying to tie together the Phoenix Force with Iron Fist’s mythology goes forgotten. It is kind of acknowledged that it is totally unfair to hold the Phoenix Five accountable for their actions while possessed. The focus really narrows in on what were the few good bits of the event. Mutantkind has been revived, but everyone’s distrust of them forced it to happen the hard way.

This, the final issue, picks up with Cyclops’ last act of martyrdom going out the window. He had been willing to take the fall for everything so the world could heal and move on, but the world had to go and refuse to do so. This forces Cyclops into a new role, and one that presumably sets up the new Uncanny X-Men series.

This issue makes a point of hammering in the role reversals of Cyclops and Wolverine. It’s a little too heavy-handed, but at least it is the truth. It’s also amusing that Logan is now in the role of the so-called boring one while Cyclops is now the dangerous maverick. But it works. It fits the progression of the story. Well, it does moreso for Cyclops than Wolverine, whose turn toward education always came off a bit forced.

My biggest problem with this series is ridiculously trivial and I admit that. But seriously, who the hell approved of the design for the helmet meant to restrain Cyclops’ powers? That clunky thing looked ridiculous and kind of undermines every scene with its ugliness. You all know he shoots blasts from his eyes, right? So why are you covering most of his head with this bobble-headed looking helmet? A pair of eyeglasses restrained his powers for half his life, and you design something the size of a space suit helmet with coke bottle lenses? Look, I’m sorry. But that stupid thing has been annoying me since the first issue.

I also have to say its disappointing that only Magneto, Magik and Danger have Cyclops’ back in this. I understand that it’s meant to be a callback to the Extinction Team, but there’s a larger context at work here. It’s a little hard believe Cyclops wouldn’t have the support of anyone else, leaving these three as the only ones ready to bust him out.

Hope Summers also gets some play in this final issue, mostly to set up the Cable and X-Force book. Her story in this series had paled in comparison to Cyclops’, but that is to be expected. She’s had her moments but never been particularly interesting. Now that her Mutant Messiah schtick has been brought to a messy conclusion and Marvel has pretty much backed out of ever admitting she’s the reincarnation of Jean Grey, I don’t expect things to ever get more interesting with her.

AVX: Consequence is not a terribly exciting series, but it has been a more interesting one than the event it spins out from. In more ways, it’s actually a conclusion to Gillen’s Uncanny X-Men run, which could have been so much more if Marvel gave him the free reign and time to play with it. Cyclops has been positioned in an even more dark and questionable role than before, and I hope Brian Michael Bendis doesn’t plan on overplaying it in the new Uncanny X-Men series.