The title says it all.  He’s a cop.  He has an axe.  He’s Axe Cop!  Axe Cop knows the score; when a Bad Guy Planet shows up and starts causing trouble for Earth, the first thing out of Axe Cop’s mouth is “We’d better go explode it”.   Thus begins this comic book adaptation of the adventures of Axe Cop and his pal Dinosaur Soldier.

I’m a little ashamed to admit it, but I’ve been out of the loop about Axe Cop.  It’s a hugely popular online comic that’s been running for over a year, and I just learned about it when a collection of the comics was published in a book recently.  If you’re also out of this particular loop, Axe Cop is written by a six-year-old boy, then drawn by his grown-up brother.

Six-year-old writer Malachai Nicolle is, in many ways a typical kid; he likes dinosaurs, robots and seeing good guys beat the bad. He’s also some sort of comedy prodigy, because instead of childish ramblings, the writing for Axe Cop comes across as brilliant absurdist humor, as evidenced by a line on the very first page “You just drank my friend’s brain”. 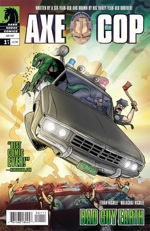 If you read the web series, fear not, the comic book does not recycle material from the web.  This three-part comic miniseries is a completely new Axe Cop adventure, in color.  If you’ve never read of the previous Axe Cop adventures, don’t worry about the backstory, because Axe Cop’s origin is explained over the course of this issue.  Of course, the story-telling is so packed with non-sequiturs that you don’t really need to know the history of Axe Cop, Dinosaur Soldier, Uni-Man or Wexter a T-Rex with gatling gun arms.  These sorts of things are just commonplace in the world of Axe Cop, and when a scientist with a unicorn horn shows up, you won’t ask for explanations.

The fast-paced story starts out by pitting our hero against an evil planet that is going to squish the Earth, but it soon has Axe Cop going up against the normal cops, who just can't stand how he breaks all the rules.  After all, normal cops carry guns, but Axe Cop walks a path less traveled.  A path he carved himself.  With an AXE!

Soon, Axe Cop and pals must investigate the source of the Bad Guy Planet, and it turns out that Psychic Bad Guys are behind it all.  These villains hatch a new scheme which involves a device that can turn good guys into bad guys- Hence the title of the miniseries: Bad Guy Earth.  That’s right, the villains are planning on turning all of the good guys on Earth into bad guys, and Axe Cop along with his team will have to stop them.

The art accompanying this psychedelic story is done with deadpan enthusiam.  Ethan Nicolle draws his brother’s narrative as though it’s a high adventure tale; none of the characters understand that they’re in a farce, and when the script says that Dinosaur Soldier puts on his catsuit, Ethan shows us what a dinosaur dressed up like a cat looks like.

The next time you hear someone spout the witty question “If they’re called ‘Comic Books’ then why aren’t they funny?  Just point them at a copy of Axe Cop: Bad Guy Earth.

Find out what happens next is our review of Issue #2.