When last we saw Axe Cop in part one of Bad Guy Earth, he and his band of heroes were heading back in time to save the dinosaurs.  That mission is quickly accomplished this month, as is always the case with storylines in Axe Cop. The plot races as fast the mind of hyper-active six-year-old, which is because the series is actually written by a six-year-old boy, Malachi Nicolle.  The art is provided by Malachi’s older brother Ethan, who draws exactly what sprigs from his younger sibling’s mind.  This results in things like a whole planet of unicorn people, or dinosaurs who shoot lava out of their mouths; all within a few ages of each other. When you ride along with Axe Cop, you don’t expect calm, deliberate pacing, you just buckle up and enjoy it.

This lightning-fast nonsense is as hysterical, as it is bewildering.   It’s played for laughs, although your typical six-year-old is likely to see this sort of thing as a gripping high adventure. Cohesive plot isn’t an issue, and neither are the laws of physics.  Axe Cop doesn’t need logic.  All Axe Cop needs is an axe and a badge.

There is an overall big picture holding this three-part miniseries together, though.  A pair of psychic villains have 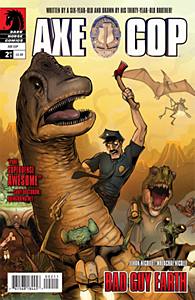 built a machine that can turn good guys into bad guys, and they’ve amassed a vast army of villains from throughout time, and turned them all evil! With only Axe Cop, and his small band of heroes left, Earth has become the titular Bad Guy planet, complete with gigantic devil horns sprouting from the North pole.  With only one issue left, it’s hard to see how Axe Cop can avert catastrophe.
Along the way, some new characters have been introduced to Axe Cop’s already colorful roster of characters.  We already met his new pal Sockarang who fights villains with his sock arms, but issue two introduces the secret origin of Sockarang, and his parents, who also have sock arms.  If you only read the web series, you might want to keepan eye on this printed version, just to stay abreast of the new additions to the continuity.

The writing is very funny in a silly way, but it is the art, which is drawn by a 30-year-old, that makes this meta gag work.  Ethan Nicolle takes his little brother’s farcical ideas and brings them to life in cartoonish fashion.  If the script says that putting an orange traffic cone over a unicorn’s horn will nullify its powers, then you can expect the planet of unicorn people to have swarms of panicked unicornians running around with traffic cones on their heads, after the bad guys invade.  When the narrative says that “Everybody was speechless”, we get a panel where all of the characters stand, mouth agape, with word balloons reading “…”

Unfortunately, prolonged exposure to Axe Cop can build up a bit of a tolerance.  Originally appearing as a short web comic with a daily dose of goofiness, it can lose just a little of its edge when read in a 24-page chunk, or as a long form story.  However,  the book still remains hysterical, although slightly less so in this issue.

Still, in a decade where much of the talk about comics consists of “They aren’t just for kids anymore”, Axe Cop shows that it can actually be a lot of fun to set aside our gritty, mature graphic novels, and spend a little time with the whimsical creation of a child’s mind.  Now, check our review of the pulse-pounding conclusion to the Bad Guy Earth trilogy.