"Trading Places"
By: Jim Bush | Comic Reviews | December 5, 2014
With the release of Avengers & X-Men Axis #6, the second act of the miniseries has been concluded. So as with the first three issues – called “Book One: The Red Supremacy” – I am going to collectively review Axis #4-6. The second group of the miniseries is called “Book Two: Inversion” and while the first three issues had a great deal of tension, the second act was a lot less effective.   I thought the plot and pacing of “The Red Supremacy” was pretty well handled and though much of the characterization felt strained in order to facilitate the plot, I thought the issues were solid overall. The second arc of Axis in some ways explains the seemingly out-of-character moments from the end of “The Red Supremacy” and while it’s good to know that those moments were intentional, the twist in “Book Two: Inversion” isn’t really developed in a new or surprising way.

At the end of Axis #3, the Avengers and X-Men, who had just worked together to defeat Red Onslaught on the island Genosha, have a heated exchange about what to do with the Red Skull’s body, something that might contain the dead Charles Xavier’s consciousness. Captain Falcon-America and Havok in particular come across looking like class-A jerks. “Book Two: Inversion” of Axis explains why: when the Scarlet Witch (aided by Dr. Doom) cast an “inversion” spell on Red Onslaught, all of the heroes and villains on the island were affected, undergoing a personality “switch” from the spell. What this practically means is that all the heroes have gone bad and all of the villains have gone good. The one person seemingly unaffected is that greyest of ethically grey guys – Magneto.   This obviously explains why the characters seemed to be acting abnormal at the end of Axis #3. However, while the switch is a fun concept by writer Rick Remender, it doesn’t really work with the heroes. I think the problem is that Marvel’s hero characters have been dragged through the mud consistently by writers since Civil War, so it’s not at all novel to see “heroes” acting dastardly. For instance, Jonathan Hickman’s current Avengers/New Avengers storylines involve a group of heroes called the Illuminati doing morally-questionable things hidden from view while other heroes plot to stop them.

The flip side is more interesting because it is relatively uncommon to see villains acting heroic. It’s not entirely unprecedented for villains to switch sides. For instance, two of the villains affected here, Mystique and Sabretooth, have been on the regular X-Men team in the past decade. Still, it’s fun seeing Carnage and Dr. Doom acting selflessly. In Axis #4-6, you only get glimpses of this. I suppose those stories are playing out more fully in the related tie-in issues like Axis: Carnage.   There are some good elements in Axis #4-6, such as the presence of wisecracking Spider-Man. I must say it’s nice to have Peter Parker back and Remender does a good job of giving him some funny “gallow’s humor” type of lines in these issues. At the end of Axis #6, an aged Steve Rogers has assembled the inverted villains together as an “Avengers” team to battle the evil heroes. While I think this team could make Book Three of Axis (called “New World Disorder”) more fun than Book Two, having villains as a superhero team sort of feels like a recycled concept as well (e.g. Thunderbolts, Dark Avengers).

There are also some choices in Axis #4-6 that I actively disliked, such as having an inverted Hulk turn into a “Hulk’s Hulk” called KLUH (Get it?!? It’s Hulk spelled backwards! OMG!). I think “Hulk’s Hulk” is a stupid concept and KLUH is an even worse name. Plus, the character design looks ugly and similar to how Marvel changed some of their monster-characters when they were affected during the miniseries Fear Itself.   On a positive side, the art on Axis #4-6 is improved in my opinion from issues #1-3. Axis #5 and 6 are drawn by Terry Dodson (with inks from his wife Rachel) and these issues are very nice looking. Issue #4 was drawn by Leinil Francis Yu, who had also drawn issue #3. I think Yu’s work on Axis has actually been better than much of his earlier work. I preferred his art on Axis #4 because the characters weren’t stuck on the perpetually dark and rainy Genosha. 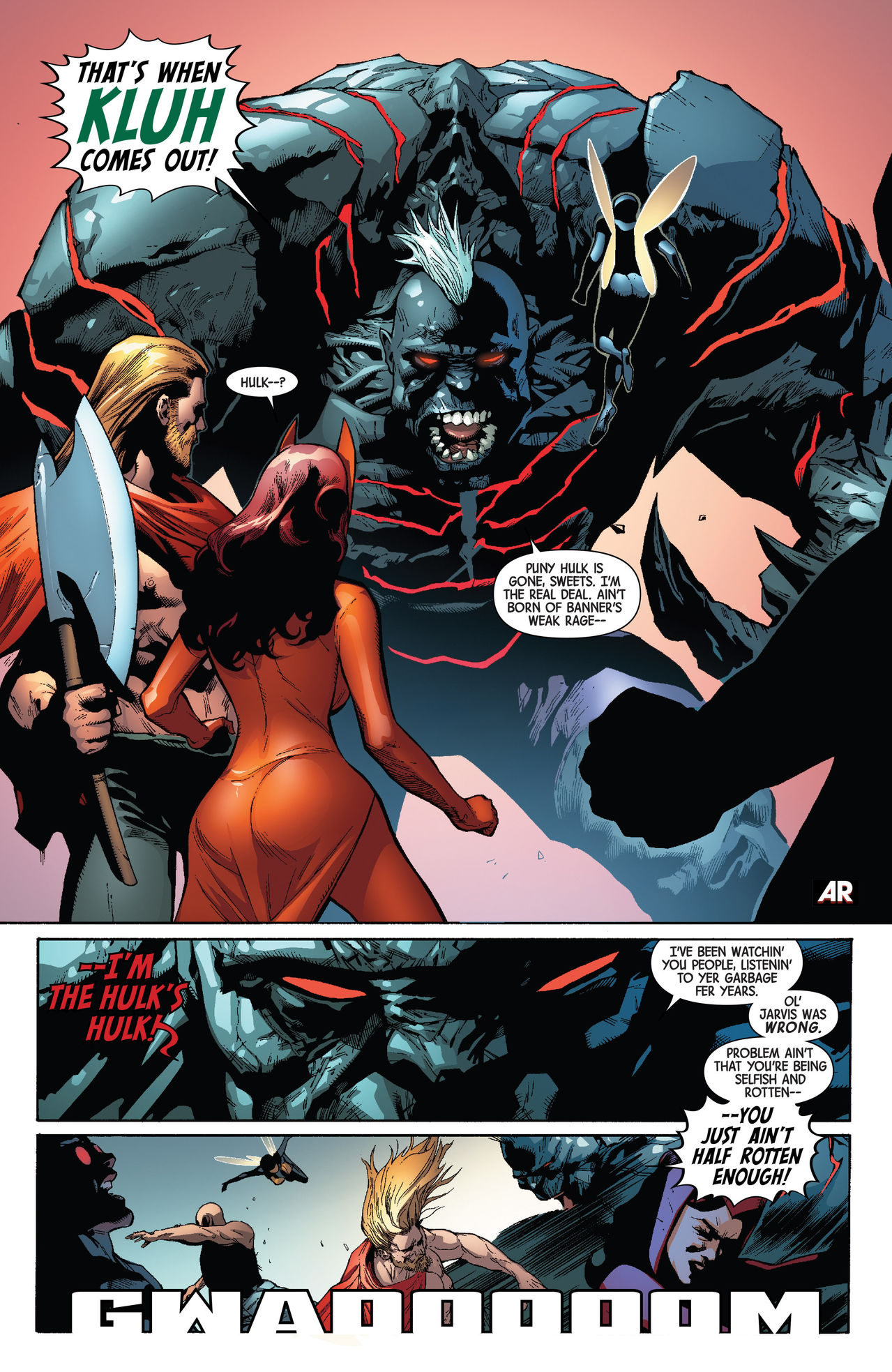 Like with a many films, the middle act on Axis sagged in momentum. The inversion gimmick has a fun-enough element (and is the impetus for the new Superior Iron Man series), but doesn’t really feel fresh applied to the heroes. Hopefully, the “New World Disorder” highlights the temporarily-reformed villains and has a clever and original way to reset the world, so that Axis goes out on a strong note.
Rating
5.1
Pros