By: Justin Moody | Uncategorized | May 29, 2010
I still reminisce every now and then about the glorious springs of my youth when baseball season would start and once our local organized little leagues were finished, my friends and I would head down to the park and play stick ball on abandoned tennis courts, wiffle ball on side streets, or home run derby on empty diamonds. Something that's going to make me reminisce a little bit more about those days is the latest entry into the Backyard Sports series, Backyard Sports: Sandlot Sluggers.

Before reading my full review of the game, be sure to check out my interview with the producer of Sandlot Sluggers, Roland Lesterlin.


The first thing you notice about Sandlot Sluggers is how great looking this game is, especially for the Xbox 360. The graphics are bright and colorful and the cut scenes for the story mode (more on that in a second) are done in stylized outlines and shadows that give it a unique and pleasing visual presence. There are a couple of glitches when you're playing sometimes, but other than that the game is just plain pretty.

The audio is also very solid and rounds out the peripherals nicely. With cute commentary from the local old men who serve as the announcers for your games to the simple menu instrumentals, the game isn't an audio revolution, but it works and is probably what you would expect from a game geared more towards teaching kids about sports and sportsmanship. 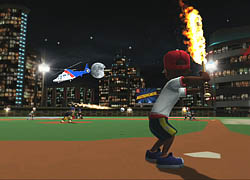 The biggest improvement to the series though comes with the brand new story mode (told you I'd get to it) that helps to deviate this game from your normal baseball sim. Playing the role of the new kid after fully customizing your look from the color of your glove to your head shape, it is up to you to unite the local kids into a team of superstars to take down Jimmy Knuckles and his squad of bullies who have pummeled all other teams into submission. Only by beating the teams of the eight other good kids can you recruit them onto your squad and gain access to Knuckles' diamond behind the local school. Coupled with mini-games after every couple of victories to improve your squad's equipment, the story mode is a great way to give life to the characters as well as to teach your little one the ins and outs of the game of baseball.

The gameplay is solid baseball action mixed in with the classic power-ups and special abilities you've come to expect from the Backyard Sports series. From booger balls that cover the screen and make it impossible to see the ball to icicle bats that freeze the first fielder to touch the ball, the new power-ups add a great element of randomness and a true sense of "it ain't over till it's over" to the game. And they might just help mom or dad keep them even with their little slugger.

Each field you play in also has its own unique qualities that add to the gameplay. From Pablo's dog grabbing balls that go near his doghouse for ground rule doubles to balls bouncing into the playground's sandbox for automatic triples, the field you play in adds to the unique strategies that can come into play. 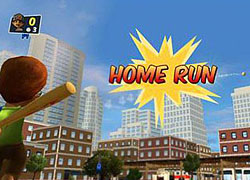 There were a couple of negatives I saw to the gameplay as well though. The most obvious negative is the fact that a run doesn't count if the final out is made on the base paths. The baseball rule is that if the run scores before the third out, the run counts. It was very irritating to get into rundowns trying to stretch a single into a double and then find out that the runner from third crossed home, but it never counted because I made the third out.

Speaking of running blunders, another glitch that drove me nuts was if I got caught stealing for the third out of an inning, the batter at the plate would be skipped over instead of leading off the next inning. This glitch baffled me and really made me think twice about when and whom I would run with. These glitches took away from the experience some and made me a little hesitant when it came to showing little kids this as a tool to teach them about baseball.

Another positive for the game though is the replay value. Along with the story mode, there are your typical season and playoff modes to continue taking on the local teams, and access to the mini-games including a baseball themed version of hot potato and a Simon-esque game of throwing the right pitch when it is called for. This should keep your little one popping this game back into their system for a while.

For what it is, Backyard Sports: Sandlot Sluggers is probably the best game yet released by the folks behind the Backyard Sports franchise. It probably won't hold the attention of an older and more hardcore baseball fan for very long, but is perfect as an introduction into baseball and baseball video games for younger kids and for parents to relate to their children. Include simpler one-button modes for even younger kids and this game will definitely appeal to every pre-pubescent little leaguer out there.