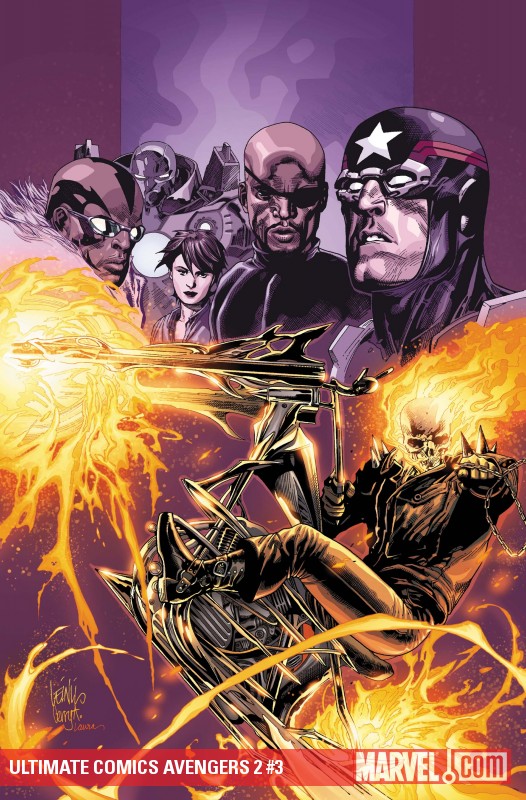 "Nick Fury’s Avengers have assembled: Black Widow, The Punisher, a new Hulk, War Machine and Hawkeye are souped-up and ready to face Hell…literally. Evil’s emissary comes in the form of The Ghostrider, a mysterious new villain sent to collect Satan’s debts: human lives. But how do you fight the devil and his men? With big guns and even bigger cojones. Who lives, who survives? Who knows? But it’ll be one hellish ride!! Join superstars MARK MILLAR and LEINIL FRANCIS YU in another heart-pumping adventure!" - Marvel.com

Kevin: Okay I'm going to take a month off from reviewing Ultimate Avengers 2 issue 3 lets get it Bagged and Boarded instead. Is it vol 2?

Dustin: Sure, Technically it's five, but whatever.

K: Basically it's due to the fact that just reviewing this book is a physical and mental strain. It instills the sheer hate for the written word and any type of colored pictures. First up Nick Fury and company are standing around thinking about going out to stop the Ghost Rider.

D: I want to say, what are they standing in? The white room from the Matrix?

K: It's an abyss of boredom that this book has created.

D: It was like Leinil said, "I can't draw enough barrels to be interesting, so white background floating feet".

K: Not only that but on the next page, Ghost Rider is doing a crossword puzzle. Even he is uninterested in anything that's happening in this book.

D: That's what I don't understand. It says "heartless" and then we are shown Ghost Rider in the act of doing it but not really. The next word is "beheaded" then he's about to take a guy's head off, which we also don't get to see.

K: And where did he get this crossword puzzle from? Hell? Because I really doubt he found this in the Chicago times.

D: I think Millar's trying to make him a serial killer for old rich white people.

K: That's the only reason that Fury wants to put Ghost Rider down is because he's killing old rich white people? Who cares? Kill more of them!

D: It's just Millar and his social commentary.

D: So once the Punisher finds out that it's old rich white people dying, he doesn't care. He opts for more of the "good" response. 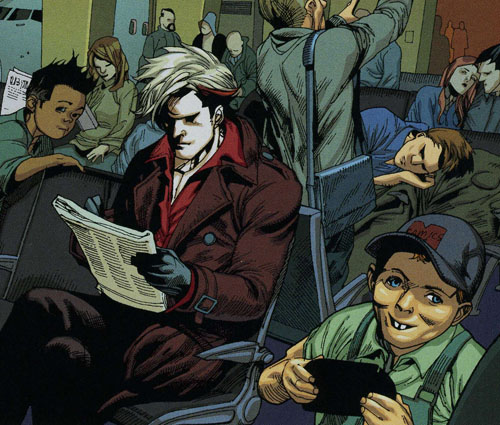 K: Little does the Punisher know that 120 volts running through his ass is not "good". All of this via his sassy mouth!

D: Yeah Black Widow or Red Widow, who by the way isn't wearing any red, loves hitting him with the juice.

K: Punisher is now laying on the ground pulls his guns...

D: More electrify with Red Widow standing over him, taunting him, "Do it. Do it!!" Damn near grabbing her crouch and spitting on him.

K: That's apparently old hat for Nick Furry because they use to be married!! Crazy!

D: Sorry P-Man but I've been there and done that. Studio audience laughs.

K: So Fury picks up Punisher and his broken marriage and we're off to Chicago.

D: Now we meet up with a tad flamboyant Ghost Rider wearing red leather, frosted hair tips and make up?

K: Looks like the lead singer from 30 Seconds to Mars, which I am not a fan of.

K: There you go Leinil you have drawn an attractive Ghost Rider.

D: Never mind that but what's up with mutant kid playing with a PSP in the foreground?

K: Laughs. It's Sloth from Goonies only he's four years old and breaking the forth wall. He's staring at you while you stare a Ghost Rider and you're both thinking, "Isn't he Purdy"

D: What's wrong with his teeth?

K: A poor dental plan for sure.

D: Outside, Hawkeye and Punisher try and have this awkward moment as they talk about their families. "So you want to get together after this, grab some coffee and have a moment together?

K: Whoa! And Hawkeye reveals that the Punisher wasn't the first to be shackled onto a Black Ops team.

D: Apparently Millar forgot he wrote the first two series of Ultimates and gave Hawkeye all the reason he needed to join the Ultimates. But then he just throws that all out the window.

K: Let's not forget this Special Black Ops team is standing in the middle of the runway of an International airport in broad daylight as Ghost Rider pops the craziest wheelie ever, takes out the plane and snatches the "Target" out.

D: The "Target" spills all of his money as he's dragged to hell. Apparently rich people just travel with large sums of cash anywhere they go.

K: The whole team is in total shock but one man. Who's going to take the shot?

K: He shoots surface to air missile and it flies through the air. We see random people watching the rocket sail through the air wondering if that's their tax dollars at work. But there is yet another deformed person breaking the forth wall staring at you staring at the rocket.

D: Damn it Leinil, just because they're not main characters doesn't mean you got to give the little baby round eyes.

K: So the Ghost Rider just ain't feeling it and jumps off his bike asking, "Who dares?"

K: What the hell did Hawkeye hit? Because everyone that was on that reviving end of that missile seems fine. Even the bike looks fresh off the show room floor. Did you hit Ghost Riders boot lace? Jesus Christ man you're an Ultimate, start acting like it!

D: Ghost Rider's target looks okay as he sails through the air. Well other than his missing pupils from the massive explosion. "Oh man I'm in for some big time head trauma when I smack the asphalt"

K: I don't know they should have just put the Sloth kid and baby round eyes on the cover and I would have bought two copies.