Banshee – A Mixture of Madness Review: Down the Rabbit Hole

After a season of watching Lucas Hood almost effortlessly take down a vast array of thugs, criminals, the occasional MMA fighter, and your average albino convict, it was really great to see the supporting players have their chance to show off their own badass skills. Lucas was kept in a surprisingly passive position for the majority of the episode. His only action that took some agency was his decision to surrender to Rabbit in exchange for Max and Carrie’s safety. Other than that he found himself in situations in which he needed saving. Proctor fulfilled his part of their bargain and rescued Lucas from certain death at the beginning of the episode and then it was essentially Carrie who ended up saving his ass from Rabbit in the end. It was an effective use of role reversal especially since it had become so routine for us to see Lucas win every battle he faced, to always be the one to take action against his countless opponents.

Carrie being the one to take down Rabbit was satisfying in a kind of redemptive way. Lucas has put himself in harm’s way many times for her sake, for her family’s sake and while she didn’t ask him to come to Banshee or follow her anywhere she is responsible for his presence there. Though she met him with hostility and anger, Lucas was always loyal to her, and that is something that can’t be said for Carrie. She was completely willing to turn Lucas in to Rabbit in order to protect her life in Banshee and most of her actions have been motivated by her own selfish instincts of self preservation. Now that she has been left with nothing to preserve or keep hidden (Max is back home; her relationship with her family is strained, her secret is out) she is in a way free to help Lucas. She probably feels guilty for the way the events have unfolded and responsible for much of the misfortune that has resulted as consequence to her actions. So, I don’t know if it was much a choice she made to go help Lucas as opposed to an obligation that needed fulfilling. Regardless, it was apt that she be the one to finally bring Rabbit down (although not finish him off as he somehow was able to get away).

The whole sequence of invading Rabbit’s safe house was well executed both technically and narratively. There was a very strong possibility and sense of danger and uncertainty as our heroes made their way through Rabbit’s men. The over the top action was entertaining and suspenseful and, while a little unrealistic that everyone came out of it alive, seemed to fit well within the world of the show. This is a pulpy action series above anything else, so suspension of disbelief is necessary for most scenes involving action and violence, which occur quite frequently, but once you get past that it is easy to just be entertained by what is happening on screen.

I expected Kai Proctor’s role to be much bigger in the battle against Rabbit, but he was totally shut out from that storyline. With the exception of the opening sequence where he takes care of Rabbit’s posse, he had nothing to do with Lucas and his story. Instead we saw him dealing with the Alex Longshadow as he makes his retaliation against Proctor. His growing relationship with Rebecca is absorbing as she proves to be a quite willing student and is thrilled by the power her uncle has. She seems to be well on her way to be Proctor’s right hand, but will there be a line that she will not cross? Proctor is extremely ruthless in his endeavors and perhaps Rebecca (having spent her entire life in a peaceful society) might reach a situation that she can’t handle. Maybe her relationship with Proctor weakens because of his overly protective/controlling ways or his contempt towards Lucas, whom we know Rebecca is fond of. Whatever direction the writers take for this relationship will be interesting because there are so many possibilities with these two. Proctor remains the most intriguing and entertaining character of the series, so his limited appearance in the finale was unfortunate, but the direction his story seems to be taking suggests a more prominent role for him in the second season, which is of course welcomed.

I question the necessity of the flashback scenes of Lucas in counseling. What new information did we learn from them? Other than the amount of time Lucas was in jail for, there wasn’t anything of value revealed by these scenes. We see Lucas being a highly perceptive person, acutely aware of his surroundings, but we have gotten glimpses of this personality trait through the season. Was the reveal that the counselor was working for Rabbit so shocking that it justified the multiple flashbacks? We already know how powerful and highly manipulative Rabbit is, this is just another example of his authority and power. It was interesting to watch these scenes, but we were still left with important questions concerning Lucas’s past, such as: What exactly happened to make Lucas and Carrie turn completely on Rabbit? There must have been something significant to trigger such a drastic change in the characters and we have no idea what it could have been. Also, we still don’t know Lucas’s real name, it is something that doesn’t really bear much importance but I thought we were finally going to be told what it was, especially in these flashback scenes.

As a season finale, the episode was successful in tying up some storylines while still leaving open threads to anticipate for the next season. The events in this last hour definitely bring up more questions concerning the characters of the series as I mentioned before. The open ended way the Rabbit storyline concluded in leaves many options open for the future. Surely Rabbit isn’t gone from their lives forever and with his possible return we can expect to learn more about Carrie and Lucas’s history. Proctor and Longshadow will continue to antagonize each other and after Proctor’s latest retaliation there is much to look forward to. What does the apparent death of Banshee’s mayor mean for the future of the town? With him gone Proctor will most likely want a potential ally in place. Will this be where Lucas’s favor comes in? And, of course, the most pressing question left in the air and the closest thing to a cliffhanger in the episode was the real Lucas Hood being unearthed from its resting place. Certainly the FBI will be deeply involved in the investigation and with our Lucas under scrutiny his future in Banshee is highly questionable. 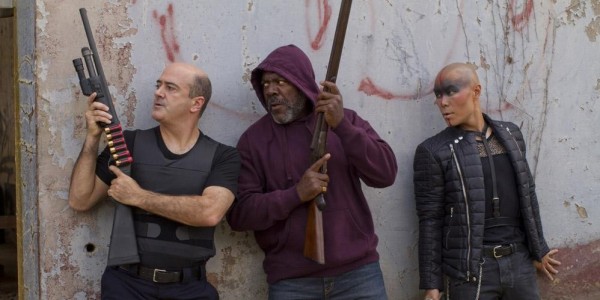 -- Burton is one brutal henchman, Proctor is lucky to have him, but I feel some tension now that Rebecca has made her way into Proctor’s life. Is Burton resentful of Rebecca’s training?

-- What’s the deal with Alex and his sister? Their relationship seems strained, I don’t know if it’s the actress who is a little bit wooden in her delivery, but there is something off and unsettling there.

-- Job is awesome, Job and Sugar interacting is great. I appreciate the bit parts of humor their relationship adds to the otherwise very tense show. Also, when does Job find the time to apply the elaborate make-up he wears? He complains about having so much work to do, but manages to find the time to look fabulous.

-- Gordon leaving with the kids is probably the smart thing to do. There doesn’t seem to be much investment in Carrie and Gordon’s relationship, but it has to be addressed at some point.

-- I loved how innocent and virginal Rebecca looked in her white dress as she made the call that blew up the hotel and caused the possible death of the town’s mayor.