Barry Allen is Back? The Dastardly Death of the Rogues Hardcover

If you check your local bookstore this month, you might find the frantic adventures of resurrected speedster Barry Allen in the collected edition of The Flash- "The Dastardly Death of the Rogues." This book contains issues one through seven of the Flash's monthly title and secret origin special. Written by Geoff Johns and drawn by Francis Manapul, with a back up story drawn by Scott Kolins. Now Johns is no stranger to The Flash as he and Kolins did a fantastic run on that title during the Wally West mantle. During that previous run, Flash's Rogues were updated and organized. The Rogues were revitalized, almost becoming more interesting than the hero himself and to some point they also worked as a type of supporting cast to that title. After Johns' departure from the title, so were the Rogues to an extent. Now Johns is back and with him are the Rogues. This time around with Barry Allen, the original Silver Age Flash. But what has changed? Five different Flashes? Is this CSI Flash? Do I have to worry about all this continuity mess?

This book started at point zero; gone is the Flash family. You get to see cameos from old characters but this story is just Barry and Barry's wife, Iris. The good news is you don't need to know what happened before. Yes, there is some questionable stuff about the characters, especially with their ages since this time they look like they are 10 years younger than the last time we saw them. But that's okay; this is not Jay Garrick's title after all. The fun thing about Iris and Barry is their chemistry- something that married heroes lack. She is a reporter and her inside source from the police is Barry. Also, as a reporter she can get to places that Barry can't as a cop. This demonstrates how they need each other and how they complement each other. They also have this text messaging system, where they keep in touch with each other at key points in the story. It is a simple and mundane thing but it shows how Iris and Barry keep in constant communication. This story doesn't show much of Barry's work place except for some old partner, who cares more about his retirement and a new boss who is kind of a jerk to Barry, which leaves Flash's supporting cast mainly to Iris. Keep in mind that this is a reboot and the less characters we see in the beginning the better we can get to know our hero. After all, Barry has been absent for almost 20 years; we need to catch up with him as much as he needs to catch up to the current DC Universe. 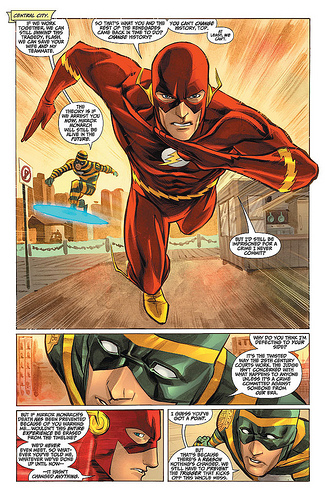 Now, what's good about this book is that it is straight to the point. From the first page you'll get immersed in a time-traveling murder case. The Reverse Rogues from the 25th century (who are good guys) travelled to our time to arrest Barry Allen for murdering the reverse Mirror Monarch. Of course, Barry is not the killer but all the evidence points to him. To prove he didn't do this murder, the Flash must solve this mystery in a race against time. To make matters worse, the evil rogues from our time are ready to fight Allen, too. Also, there is a secret mirror that the original Mirror Master left, not to be broken until the return of Mr. Allen. Spoiler alert! The mirror gets broken and one of the rogues is the real killer and Iris' life is in danger. Big shocker, right? This story borrows heavily from Minority Report in the essence that the Reverse Rogues, or Renegades, go back in time to stop crimes from ever happening.

But to be a Renegade, your whole family tree must be crime free, too. Now this is the real spoiler alert: the reverse Top is the real culprit; he framed Barry for the murder. Why? To stop him from opening an old case. That way he would stop Barry from proving that a wrong person was arrested and then discovering the real culprit, who happens to be a ancestor of the reverse Top. Now this story is a prelude to "Flashpoint," a big event coming this year to rock Flash's universe. This book showed us that there's a rupture in time coming from the 21st century and that something wicked is coming from Mirror Master's mirror, which might affect Iris into becoming a new rogue called the Mirror Mistress. In an additional story, Captain Boomerang goes to Iron Heights and sets free Professor Zoom. Now as far as the action goes, it is your typical comic book slugfest. Sure, we get to see Flash using his intellect to escape and fight these threats, but nothing that makes us go "wow, that was amazing." In fact, this is more of a showcase to Allen's strength so that readers can see he is the real deal.

What is cool about this revamp is how it shows the police department's mentality to only close cases fast, choosing quantity over quality. Meaning there are more cold cases and wrongfully accused in this city thanks to the "do it fast" attitude this department has. It is a nice contrast to Flash, as Allen must work slow in a department that wants things done fast. Another plus is that reopening cold cases might give the book a good chance for self-contained stories. Allen is a better character for investigating crimes than Wally was. He is intelligent, determined and has a stronger sense of responsibility.

There is no better way to 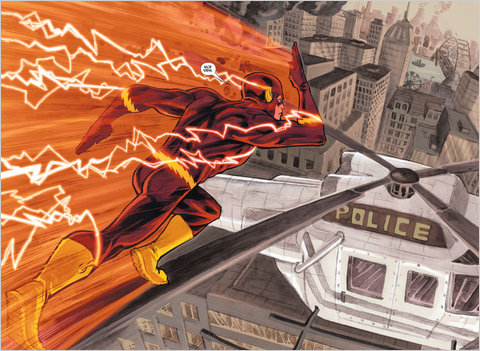 start a flagship title than with a paradoxical time-twisting story. I'm kidding, it's horrible! But one advantage a collected edition has over a monthly is that we don't have to wait a month to read a whole story arc. This will give you a chance to keep up with this time-twisting story in one sitting.  Johns is trying to give Allen a stronger personality than what he previously had. So reading this story is not so much a focus on the mystery, but on the characters. The art of the book has a modern yet retro aspect that works wonders in this story. Also, the storytelling is clean, fast and with a hint of manga on the side. The action and reaction by the people in Flash's world is top notch, almost on par to Metropolis and Gotham.

Johns' script doesn't waste time in planting seeds for future story lines, but for a character that's been gone for so long, starting with a time-traveling story seems like a bad idea. Also, why the rush to "Flashpoint"? Give the character a chance to get fully back to the pages before going into big events and major crossovers. It needs to have more CSI moments so it can differ from Wally West's Flash. It is obvious that Johns is trying to do the same thing he did for Green Lantern to Flash. The only way we can know if this is going to work is if the "Flashpoint" event really delivers the goods. Until then, you have this book. It is an entertaining book, not the greatest, but if you are a fan of the Flash and understand that this is a prelude to a bigger event, then you will need two things: patience and money. So save your dough, because once you buy this, it will become a commitment to the other volumes to come. Remember that Johns' classic Flash run is coming in an omnibus book, so make sure to save money for that, too. Whether or not this whole Flash rebirth is as good as Green Lantern's is yet to be seen, but it sure is an interesting time to pick up Flash. Like the story states, "Barry Allen, you are on trial!".