Observant gamers have spotted a Batman: Arkham City Xbox 360 bundle available for preorder on Amazon's German website. The bundle has not yet been officially confirmed by Microsoft or Arkham City developer Rocksteady, and it is still unclear if it will be released in North America. The listing for the bundle is 279.99 Euros, approximately 380 U.S. dollars. However, unlike the previously announced Kinect Star Wars and Call of Duty: Modern Warfare 3 Xbox 360 consoles, the Arkham City bundle will not include a special console with special Batman features. Instead, the bundle will come with a standard 250GB Xbox 360 console.

Even if the bundle doesn’t arrive in the United States, Arkham City fans can still purchase a $100 special edition of the game when it is released on October 18. The Batman: Arkham City Collector's Edition will include a Batman statue, an art book, soundtrack, the animated film Batman: Gotham Knight, and other Dark Knight-related goods. Those who preorder the game from GameStop will receive the “Joker’s Carnival” DLC, which is expected to add four hours to the game. Arkham City is also planned to have episodic DLC in the months following its release. 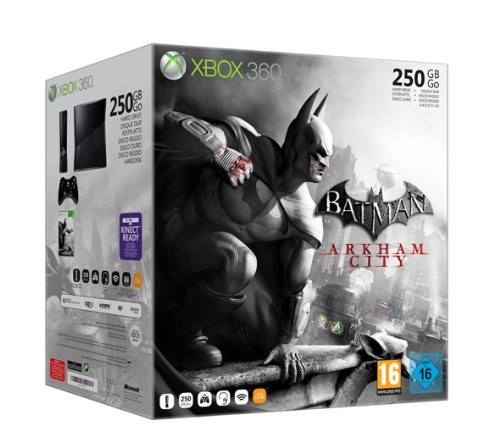