"The epic conclusion to the Arkham series"
By: Matt Rowles | PC Reviews - PS4 Reviews - Xbox One Reviews | June 29, 2015
Batman: Arkham Knight is the long awaited final entry in Rocksteady’s trilogy (though the fourth Arkham game including the underrated Arkham Origins) and looks to conclude the story started over six years ago. Picking up where we left off in Arkham City, we see Batman’s final showdown as the caped crusader as he has to take down Gotham’s most wanted once again. Will this final chapter leave the series on a high? Or feel like a missed opportunity? Arkham Knight is definitely worth the wait and they may have saved the best till last.
Story wise this game is incredibly fascinating and intriguing. After the last game killed off the main antagonist it did seem like an impossible task to achieve the same level of drama with the series less known villains but given the hole that Rocksteady had written themselves into they pretty much did the best they could do. Some of it does seem slightly shoehorned in, but it mostly comes across really well and actually makes a lot of sense given the motives of the villains involved. 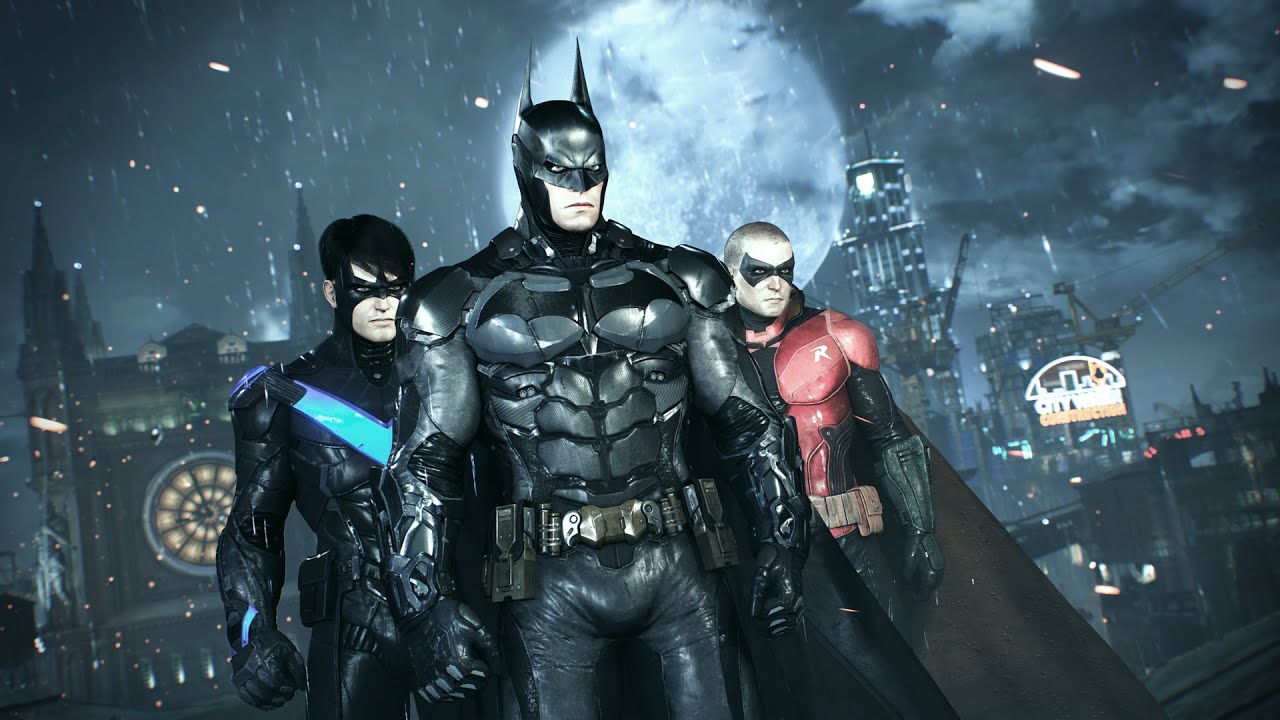 The cast of villains on show once again are just amazing. With so many being only part of the side missions and not the main story; it makes the side content so much more appealing than any other open world game. The fact that the side content contains the likes of Riddler, Two Face and Penguin creates in my opinion the best side missions in video games today. Some collectibles and AR challenges aren’t too exciting but investigating burning buildings which then turns into a boss fight with Firefly? So cool.
Talking of boss fights, this is probably the area this game suffers the most as I think it clearly has the worst of any Arkham game to date. Even Origins had multiple great boss sequences, let alone the great Mr.Freeze one from Arkham City. When you compare to what is on display here it just isn't comparable. Most encounters involve being in the Batmobile’s tank mode and really aren’t too great. 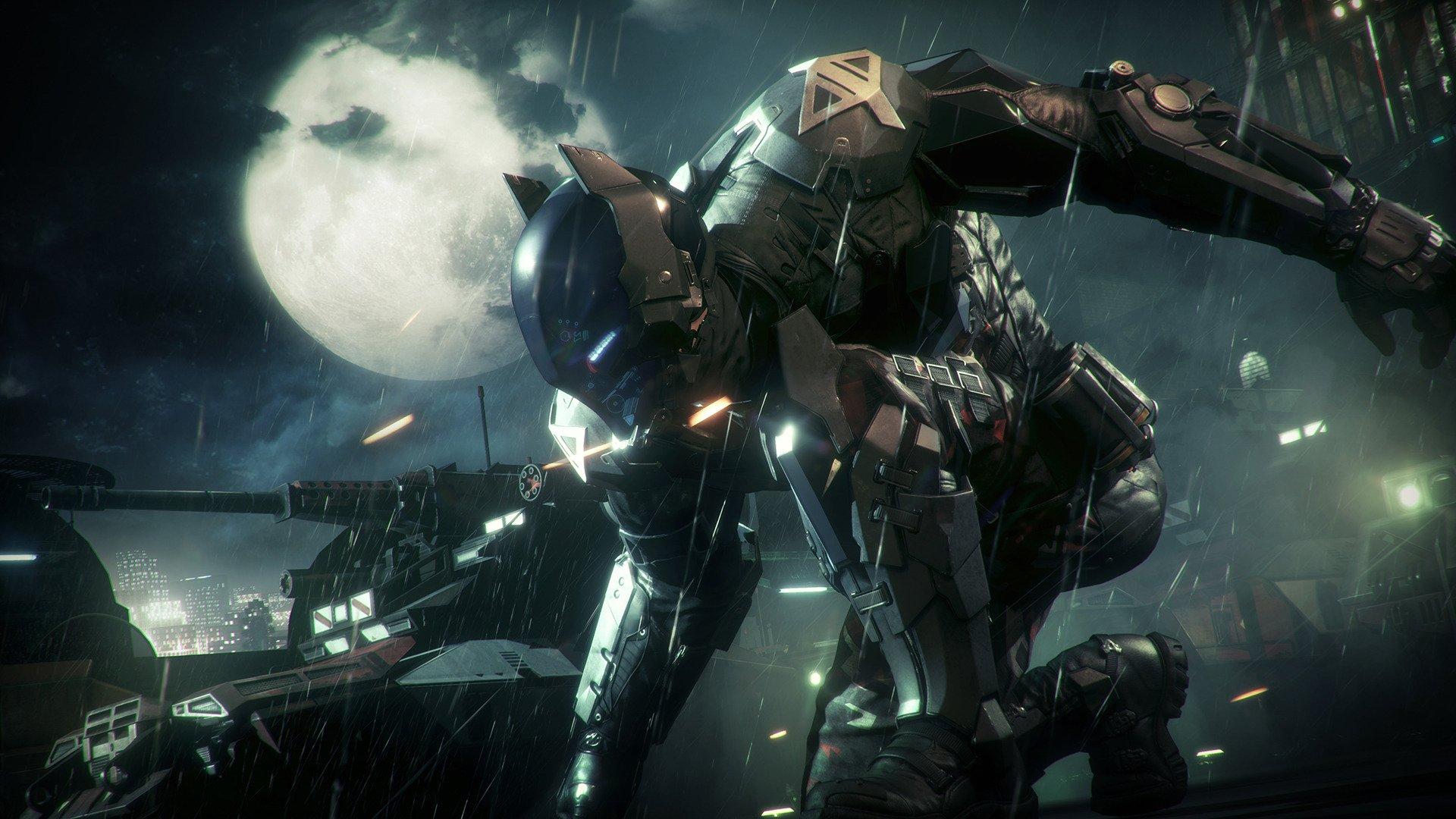 The Batmobile is the big new feature in this game and for the most part is a fantastic addition to the series. These games really were missing a good Batmobile to be the complete Batman experience and driving around in it feels great. Going into tank mode with the press of a button works surprisingly well and controls with relative ease. Even though it doesn't feel very batman to be in a tank taking out hundreds of drones at a time, what’s lost in it being out of place is gained by how fun it is.
My only complaint is that it is used way too much in the main story, especially towards the end. Having optional tank side missions is great, but when it’s so clearly forced into the story and really feels out of place. And the stealth tank sections where you have to sneak behind enemies to take them out without being spotted take too long and aren’t very fun or fulfilling.

Playing on PS4, the game looks beautiful and runs incredibly well. Being current generation only really makes a big difference to open world games and it’s great to finally see developers not have the same restraints they had while working on the previous generation of consoles.
Some of the most impressive things in this game is how well everything ties together. As I mentioned with the side missions earlier, the game flows seamlessly from in game cutscenes to gameplay with zero cuts or loading screens. You could be flying around the open world one second and then fighting a villain the next. The camera angles used are so well thought out the game feels incredibly cinematic like you are watching a film at times.

Combat is unchanged for the most part. It still feels fantastic taking out multiple enemies at a time and chaining together combos feels smooth and works the way it should. The newest feature is dual fighting whereby you can switch between two characters during combat and when your combo is high enough you can perform a dual takedown on someone. These moments feel so awesome with the way the action slows down as the camera pans over your two characters kicking ass. I only wish every encounter involved dual fighting after experiencing it the first time.
Some of the camera tricks used to progress the story later in the game in particular are very cool. Instead of just pressing a button, you move the camera around to reveal something that wasn't previously there. It just pulled me into the action even more and with how engrossing the story was already it just made the whole thing that little bit better.

The open world looks and feels way better to get around than previously in Arkham City. There are no hidden load screens to areas you can’t get to. Every area is accessible from anywhere else on the map which makes it a true open world game this time around.
Batman: Arkham Knight is an incredible game and a worthy last entry in the series from developer Rocksteady. It’s the culmination of everything they have done so far; from the astonishing Arkham Asylum with it’s Metroidvania level design to the open world of Arkham City and it’s fantastic story twists; it feels like the perfect time to move on. Even after playing four of these games now I still want to beat every side mission and collect every Riddler trophy. These games are just so much fun to play that I don’t think I could ever get sick of playing them even without the new features they still continue to add like the Batmobile. While it’s sad to think this could be the end, I’m more excited for the future of Rocksteady and what’s in store for them. Until then we still get another fantastic Batman game that is a joy to play.
Rating
9.0
Pros