Batman Incorporated #11 Review: No One Was Sober in the Making of This Comic

I picked a good time to accidentally have this title added to my pull-list. This issue may not satisfy ongoing readers of the series, but as the one and only issue for me I'm more than satisfied by the bonkers storyline and enjoyable bunch of characters.

This issue of Batman Incorporated features the Batman of Japan and former Mr. Unknown body double Jiro Osamu. He's joined by his spunky sidekick Falcon (although her full name according to Comic Vine is Shy Crazy Lolita Girl Canary). In this interlude the two are after a team of bikers under the leadership of Lady Tiger First who are trying to get back in the good graces of Leviathan.

As I alluded to before, I'm pretty sure writer Chris Burnham was blitzed out of his mind while he was writing this issue. The ideas behind the characters are just too insane to be sober thoughts. Lady Tiger Fist has roboticized tiger heads for fists which leads to quite a few laughs, the team of bikers are like a crass version of the Power Rangers with Nanite-infected faces and Falcon wears a school girl outfit straight out of a manga. All these characters are hysterical because of how unbelievable they are. 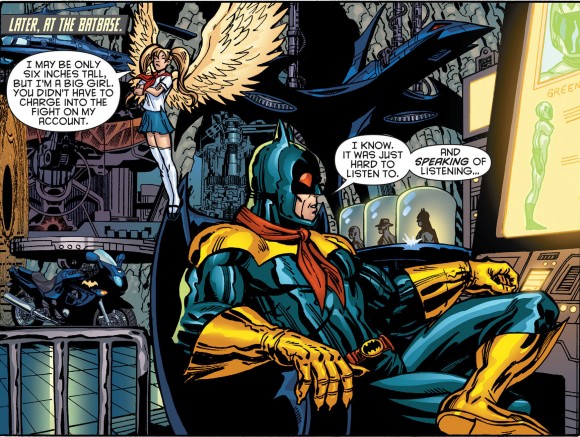 The relationship between Jiro and Falcon comes through very strongly and I like how a romantic relationship between the two is made a bit more complex by the fact that Falcon is six inches tall. There was also a touching moment when Jiro tries to help Falcon, which is then followed by Falcon telling Jiro she can handle herself. Not only do we get more of their chemistry, we get to see how strong, stubborn and amusing Falcon is.

Amidst this array of wacky characters the epitome of weirdness happens when Jiro and Falcon are fighting off the bikers and the bikers lay into Falcon with a ton of vulgar insults that you would have to read to believe. Half of them referenced other works including the Power Rangers and Doctor Who. These references are so unbelievably vulgar that I can't be repulsed by them and I instead wonder how Burnham got them past his editor.

But then? Then, later on, one of the bikers says the most amazingly stupid line I think I've ever read in a comic book: "You promiscuous butt chunks."

Let me reiterate that nonsense: "You promiscuous butt chunks."

It doesn't make sense in context either. 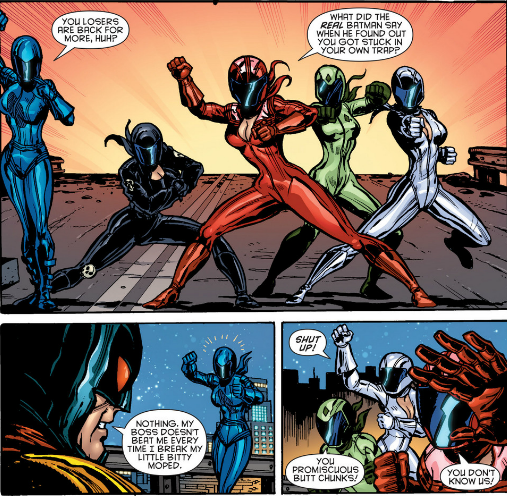 The story itself is much less wacky. It's the basic superhero comic book set-up where the hero is going after the villain (or, in this case, villains) who are causing ruckus in the town. It's a completely self-contained story with no high stakes. Though the final fight scene between Jiro, Falcon, the bikers and Lady Tiger First does have some touch-and-go moments, but this issue being a one-off, there's really no suspense since you can be pretty sure no one is going to die in a story as silly as this. The strength of this issue comes strictly from the characters.

Overall the artwork was solid and felt like it went along with the vibe of the issue. One panel that artist Jorge Lucas makes surprisingly gruesome is when the bikers remove their helmets and reveal their messed up mugs. It was a great panel, over-the-top like the characters. Colorist Ian Hannin's choice to make the bikers Power Ranger colors was also a great choice that added to the jokes. All the designs are enjoyable and memorable, but not because of Lucas's artwork. It was because the character's designs were already memorable to begin with. Though the decision to put Canary in a school girl uniform makes it feel like they were trying to make her Lolita jailbait (which seems to be part of the joke since Falcon has to keep reminding everyone she's twenty, not twelve). 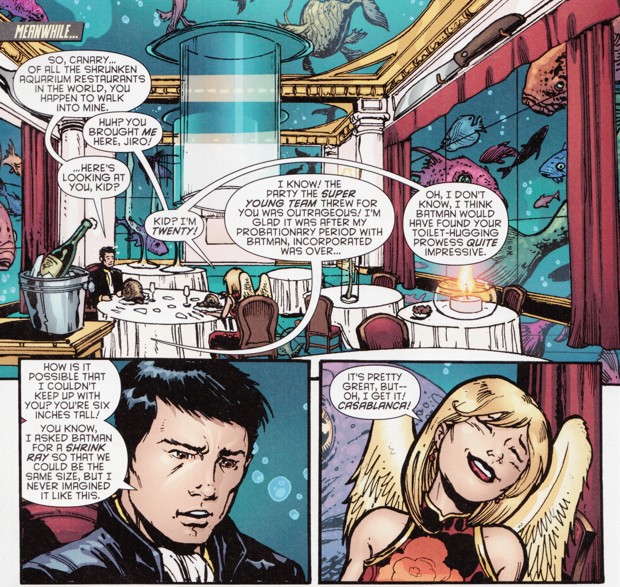 Originally I was angry before I read this because it was placed in my pull-list accidentally and that's $2.99 I could be spending on another comic. However, after reading this I couldn't stay mad. It's an insane romp with immature humor, a self-contained story we see all too little of in comics and characters I would love to see again. The perfect guilty pleasure. However, there is a big problem with this interlude and it's just that: it's an interlude. I've read up on the series and I did read issue six which featured the death of a prominent Batman ally. Grant Morrison has used this series to build-up a reputably astounding and emotional story about the conflict between Batman, Talia and Leviathan – and then this issue makes readers wait another month for the serious stuff. I can't imagine ongoing readers being happy in the slightest about it, but if you're interested in mind-numbing humor give this a shot.