Have you heard? Batman died. Not actually. You see near the end of Final Crisis, Darkseid hit Batman with his omega beams, which normally would destroy a person on contact. Batman, being Batman, was not killed but displaced in time. The Return of Bruce Wayne is just that, Bruce Wayne finding his way through time to return home. Each issue deals with Bruce in a different era trying to survive. The first issue has him at the dawn of man-kind surrounded by Cavemen.

The story begins with a group of men huddled around a crashed rocket. How the rocket got there is a mystery. The cavemen speak in broken English and are amazed by the find. They’ve arrived to turn one of their boys into a man and to do so they must visit the one called Old Man. What they find instead is Bruce. The Old Man has died after drawing several of DC’s embalms on a cave wall. The one called Man, takes the place of Old Man as the prior Old Man had done before him. The group stays the night as they study Bruce. Before the night ends the group is attacked by a warring clan. Everyone but the boy and Bruce are killed. 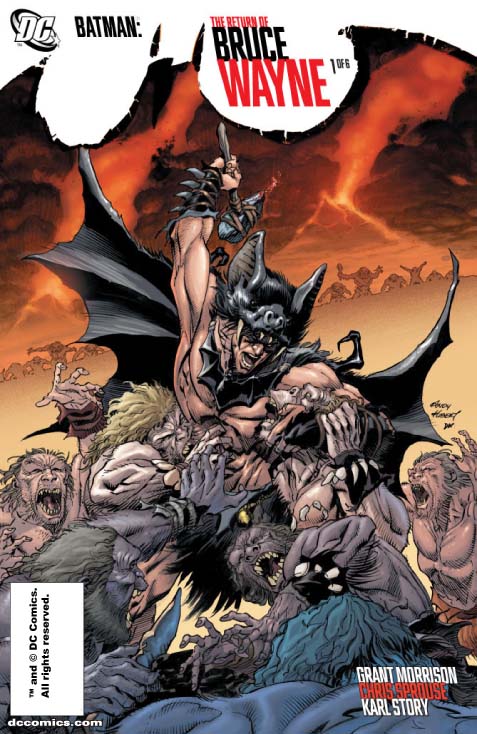 The leader of the clan wants to fight Bruce to the death in order to show his dominance to his tribe. Bruce, or as he’s now called the Man of Bats, is staked to the ground for his battle in the morning. The young boy sneaks into the camp and frees Man of Bats. The boy has painted a domino mask around his eyes and wants to be “Man of Bats” sidekick. After being freed, Man of Bats (as Bruce is called now) takes a large bat that has been gutted and wears it as his cowl.

There’s been a lot of build-up to this event, and frankly it’s been a long time coming. The problem is that Grant Morrison (Batman & Robin) isn’t the right writer for the story. There’s never a point in which a “Batman Moment” happens. Bruce kicks a lot of butt but he never displays any of his true skills. He relies on his utility belt to defeat his enemies when he should be a physical match for them. Morrison tells a very interesting story but never quiet feels like a Batman story. In all honesty, the main character could have been anyone. What’s also missing from this issue is any mention of the clues Bruce has been leaving in Batman & Robin. Granted, it’s the first issue but there have been three issue of Batman to build-up his return and the mystery around it, with no pay-off in this issue.

Morrison may be building a pattern within the book and the Batman franchise. His obsession of black and red in Batman R.I.P. continues into this book. It’s hard to understand why the young boy in the story would suddenly paint a domino mask around his eyes and create a shield with the Batman logo on it. It’s harder to believe that Batman would have a sidekick no matter where he goes, yet that seems to be the pattern. There’s also a character named Joker, which also seems unlikely. The story in and of itself is not bad at all; it just doesn’t feel like a Batman story. 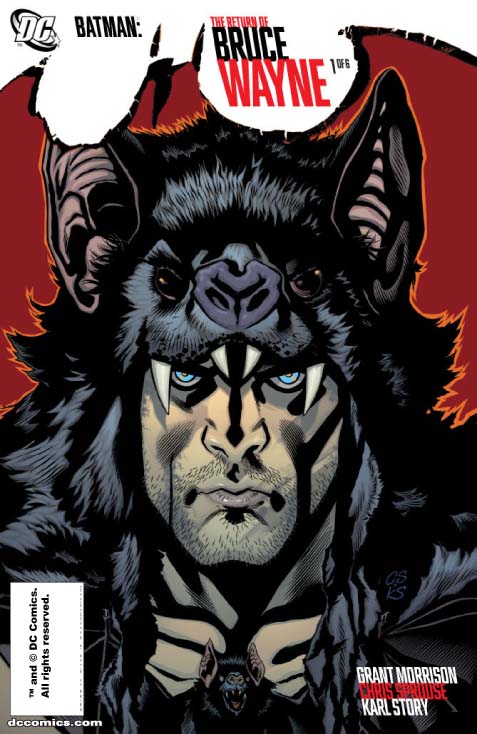 Grant Morrison has found a strong collaborator in Chris Sprouse (Midnighter) for this series. Sprouse’s pencils are impressive and sharp. There’s something indescribable about the look of the book. The art is detailed yet empty in the right places. The cavemen are distinguishable and each has its own frame work and size. Then there’s Bruce. If there’s one thing about this book, Bruce looks like a bad ass. The first scene that he appears in, makes him look like a man not to be messed with.

Karl Story (The Authority) compliments Sprouse’s pencils with his inks perfectly. He keeps the images crisp with sharp edges and plenty of room for the color to do its job. Guy Major (Blue Monday) really steps into the big leagues with his performance on the series. His coloring is simple, yet complete, which keeps the sharp clean look of the book. Morrison is mostly telling a visual story and the three artists combine to make it a stunning tale.

This book really lacks the feel of a big event book, which seems to be a problem Morrison has. He expects the end to give the reader the pay-off, but he fails to understand that they want to be excited in between. Readers that have been following this long journey may take a sigh of relief as it has finally started to end. Hopefully, Morrison and team can deliver the goods they’ve been promising since the beginning.

You know I still have no idea what the R.I.P. stood for in Batman R.I.P. and I’m not going to look it up. Follow Dustin on Twitter and ask him anything on FormSpring.