Battle of the Sexes Review

"It has a strong serve but it becomes a double fault"
By: Russ Matthews | Movie Reviews | September 21, 2017
In an era of Angelique Kerber and Serena Williams, it is hard to imagine a time when leadership within the tennis community trivialized women's tennis. Many would say that there is still work to be done to show respect to these incredible athletes within the sporting world, but the progress since the '70s has been significant. Battle of the Sexes depicts a key turning point in women’s tennis and male/female relations in western culture. Billie Jean King (Emma Stone) was a force of unrivaled stature in the world of women’s tennis from the '60s through until the '80s. Her racket allowed her to become a trailblazer in the world of sport and to see equal pay for female players. She came into sporting history during a significant time of social shifts and sometimes the opportunities for change came in strange packages. [caption id="attachment_100472" align="alignright" width="600"]

Emma Stone as "Billie Jean King" and Steve Carell as "Bobby Riggs" in BATTLE OF THE SEXES. Photo by Melinda Sue Gordon. © 2016 Twentieth Century Fox Film Corporation All Rights Reserved[/caption] Bobby Riggs (Steve Carell) was a former tennis champion from a previous era and now is left to hustling people out of their money on the courts. After some poor life choices, he came up with the idea to challenge the #1 women's player to play against him in The Battle of the Sexes. His first target was reigning female leader, Margaret Court (Jessica McNamee), but then the door of opportunity finally opened for the real prize of playing against Billie. This history-making event became a media dream and drew an audience of over 90 million viewers. Throughout the ensuing media circus surrounding the event, this tennis match became a turning point in the sport. What better choice for directing a film named Battle of the Sexes, than the married couple of Jonathan Dayton and Valerie Faris. The creative minds behind the film Little Miss Sunshine provide a balanced view of the fight for women’s equality in sport and for the social changes that continue to impact our culture. Not shying away from some of the key issues of chauvinism and homosexuality that were interwoven within this story, this directorial couple delivers a soft lob to these confronting issues.

One aspect that Dayton and Faris benefit from in this time on the courts is the quality cast. From the lead actors to the supporting cast of Andrea Riseborough, Elisabeth Shue, Austin Stowell and Sarah Silverman, this film oozes with strong performances from the baseline to the net. From the personal situations to the infighting within the tennis community to the active display on the court, there was an attention to detail that deserves admiration and recognition. Even though it does move toward the calculable sporting film conclusion, it is the acting that serves up the necessary action to keep this from a mere exhibition match. 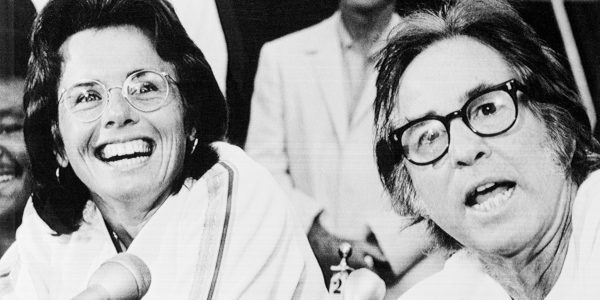 It is the emphasis on the realities of Billie Jean and Bobby's personal lives that prove to be the undoing of the film. From King’s struggle with her sexuality to Riggs’ addiction to gambling, the film only manages to show the actual effect it had on the two central characters. The failure to show the ripple effect it had on their spouses and families seems to minimize the difficulties of those who were impacted most by their decisions. This exclusion was understandable but did cause the whole film to center on these two large personalities, which left them more egotistical than sympathetic. Especially with the heavy-handed and forced statement by Alan Cummings at the end, this came off as cringe-worthy and unlikely to be an accurate depiction of history. Battle of the Sexes provides a glimpse into a part of sporting history that many are unaware occurred or may minimize the significance of the spectacle. The movie had the potential to be engaging and entertaining but with the egocentric depiction of their personal lives, this went from being the battle of the century to a non-event.
Rating
6.0
Pros