Battlefield 3: DICE Breaks Down the Beta

By: | PS3 News | October 22, 2011
Tommy Rydling, Jr. Product Manager at DICE, posted on the PlayStation Blog today, thanking PS3 players for their participation in the open Battlefield 3 beta.  DICE used the beta to test its network load and work on matchmaking.  Large open betas can provide invaluable information to developers and DICE was not short on beta participation.  The numbers are in and the run-down is pretty impressive! 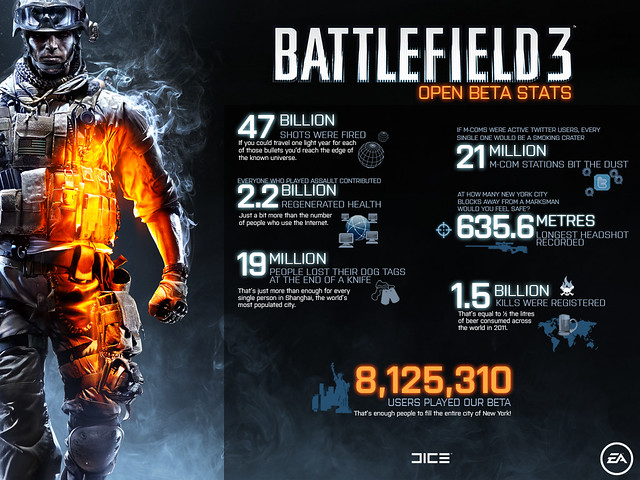 Considering the number of people that played the beta I suppose it isn't all too surprising, but some of these numbers are impressive to say the least.  DICE felt the heat of criticism from many gamers that still do not understand the point of a beta versus a demo, and even though the main point of the beta wasn't focused on gameplay, Rydling announced several updates that are being made to the game prior to the game's launch on Oct. 25th.  Many of the changes relate to improved squad functionality, allowing gamers to create squads prior to joining games and maintaining the squad through game sessions.  Not to mention a more accessible settings menu and improved kill cam.

Do you have your preorder in or are you waiting to hear from your favorite critics?  Stay tuned to Player Affinity as we'll be bringing you our take on Battlefield 3 as soon as possible.