By: Paul Lawford | PC Features - PS3 Features - PS4 Features - Xbox 360 Features - Xbox One Features | March 21, 2014
A mere five months ago, EA introduced its flagship shooter Battlefield 4 to the world amidst a wave of login issues, glitches, and other graphical problems. Many fans abandoned the brand moving over to Call of Duty and now Titanfall, but the game still plodded on gaining millions of players. Well, today we look at the next instalment of the game as Naval Strike aims to reinvigorate the series and bring back some of those forgotten players.

Beyond the server issues and bugs, Battlefield 4 is an immense game. It looks glorious, It plays amazingly well on my PC and the only criticism I have is that the bugs still remain a lengthy five months since the release, Surely they should be ironed out by now? Well EA is pushing out its 3rd DLC for its fans packaged under the name Naval Strike. This is the first time that the franchise that focuses on naval combat so it is an interesting move from EA that definitely adds a different dimension to the genre. Lost Islands displays a wrecked plane on the central island. The Nansha Strike map details fishing shanties town-esque surroundings and military bases and reminds me of a eastern world port town. Operation Mortar is focused on an island with a Spanish looking fort and bunker and features some immense levolution like a sunrise which will add some tactical consideration to fighting on that map as the light is incredibly intense (this map also has a 15th century fortication with an aged smooth bore cannon) and Wave Breaker's key landmark is a huge submarine bay with an island hidden underneath. All of these new maps are of course focused on island warfare meaning a heavy reliance on water vehicles and on land vehicles meaning the combat will be epic and fast paced! Think multiple different Paracel Storms (Island map in original BF4) and you will get the drift of how these maps will pan out. 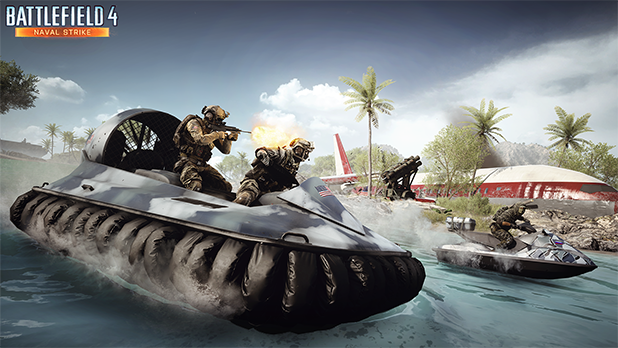 If you enjoy boat combat in the current conquest maps in BF4 then this DLC is going to be right up your alley. Filling up your crew mates into an armored boat and taking out helicopters or storming an enemy base feels very rewarding as it has always done in the BF4. One thing that is quite annoying is that due to the constant water battles, if you evacuate your bout/ski etc, the swim back to the island is a massive inconvenience. It has always felt this way in Paracel Storm, but with all these new maps focusing on sea combat you're going to be spending a lot of time in the water.
Naval Strike's also brings to us a new mode based on Battlefield 2142's Titan Mode which has been labelled as Carrier Assault. In Carrier Assault, both teams start on an aircraft carrier. The first half of the match is played like Conquest capturing focused points on the map. Each captured point directs a missile launcher at the enemy's aircraft carrier which over time damages its armor. Once the carrier ha been reduced to half health you can go in and siege the building. This is where you can you can choose to focus on the capture points and reduce the enemy carrier's armor to zero where you will then win the game or you can full-on assault the carrier itself. 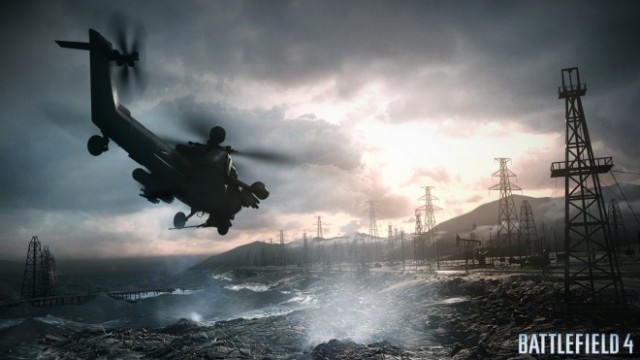 If you choose the latter, the game turns into a mini-Rush match where you have to board the aircraft carrier and then arm/detonate two bombs on the ship to win. The aircraft carrier is huge with multiple floors, sealable doors, and narrow corridors. Carrier Assault is a great reinvigoration of Battlefield 2142's futuristic sci-fi theme for a modern warfare setting and will definitely enhance this DLC and makes it something to look forward to. It is a very compelling addition and should be very welcomed by fans. Naval Strike also adds five new weapons to your Battlefield arsenal with a couple of new gadgets to boot. It is hard to note if the new guns are any different to the current choices as only a long play time will give the player the experience to choose whether the new guns are in fact better, but David Sirland of DICE recently mentioned a nerf to the Javelin being a 3-hit killer. The biggest weaponry addition is the Anti-Air Mine which destroys aircraft similar to the way a land-mine takes out vehicles. It is a missile launcher tied into a radar system and when aircraft get close it automatically fires. The mine only fires one missile before disappearing, and the damage is low, but it is an useful tool to supplement a real anti-air weapon. 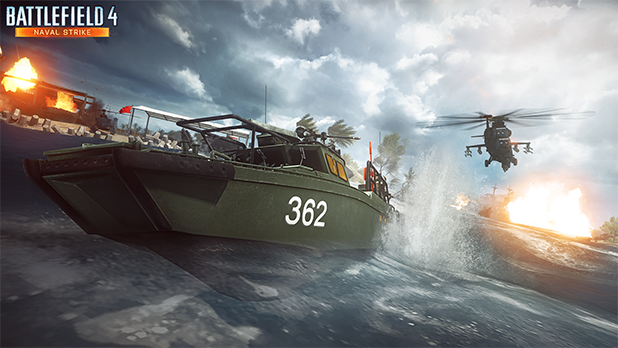 The new DLC really adds to the already frantic battles of the Battlefield series. I have no doubt that this should reinvigorate those naysayers into revisiting the game again. There are still issues to iron out with the game and I hope to hell that EA fixes these before the DLC and the hit box issue among the multitude of server issues get fixed. That is the one thing holding this game back and hopefully if this DLC is implemented correctly then it should reclaim its rightful place at the top of the FPS ladder. The new DLC comes out for Battlefield Premium members on Tuesday while everyone else waits two weeks later after that. You can see footage of Naval Strike from a recent Battlefield 4 stream here.