By: Justin Moody | PS3 Reviews | December 23, 2010
Battlefield Bad Company 2 is widely considered to be one of the best multiplayer experiences on the current set of consoles. With crisp graphics, a deep set of customization options, destructible environments, and gameplay that actually encouraged teamwork, B Company's second outing was no slouch. Unfortunately, with developer DICE's current status as EA's workhorse, there was not much time in their schedule between Medal of Honor and Battlefield 3 to actually expand upon the juggernaut they had created. Sure, there was the SPECTAT pack and a few re-purposed levels thrown out to sate players hungry for more action, but these were not enough. Finally, after months of waiting, the first significant expansion to the game has been released. Is it worth the wait? 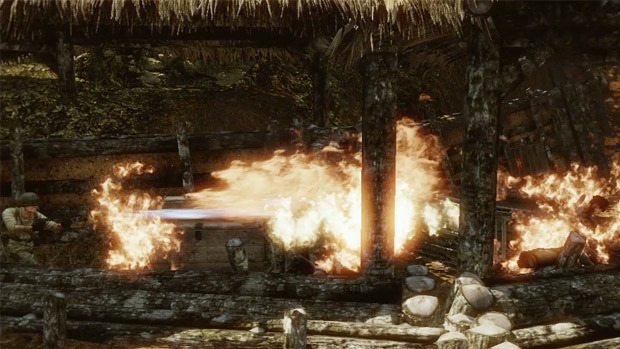 Bad Company 2's Vietnam expansion pack consists of five new maps (one of which will only be unlocked after the community reaches a certain number of team actions, such as repairs or revives,) twenty guns, and seven new vehicles. For a measly fifteen dollars, this is a very meaty expansion. The major difference that veteran players will immediately notice is the omission of scopes from the action. With the exception of sniper rifles, it is no longer possible to attach scopes to your weapons. On the one hand, this certainly serves to level the playing field a bit. In the original Bad Company 2, scopes had to be earned through experience, meaning that newer players were immediately put at a disadvantage. In Vietnam, this is a non-issue. On the other hand, though, it makes fighting at mid-to-long-range much more difficult than it was in the past. This is certainly a game more about close range combat than its predecessors, and it feels unique in the Battlefield canon because of this.

The problem here is that not all of the maps were designed with this new emphasis in mind. Of the four maps initially available, Hill 137 is easily the worst. During Rush mode, this map essentially starts both sides on a hill. Between the two hills is a valley with a little creek running through it and a gun boat waiting in the creek. The problem here is that the attackers need to rush into the valley or across the creek in order to get to the base they are supposed to be attacking, while the defenders can lie in wait on top of their hill, using sniper rifles to thin the attacking ranks. If the attackers resort to counter-sniping, they are only buying themselves time, as the game will end in defeat if they do not destroy the defender's base. This creates a situation in which it is incredibly difficult for the attackers to advance to the next base. This map usually ends in defeat for them. 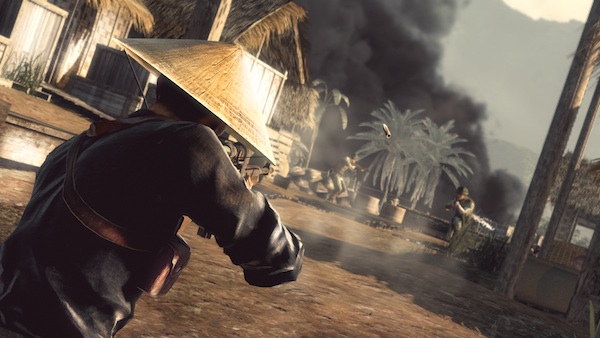 Luckily, the other maps pick up the slack. Cao Son Temple is basically an average Bad Company map. It is not incredible in its design, but it is functional and fun to play on. Far more entertaining are the Vantage Point and Phu Bai Valley maps. Vantage Point is an explosive battle through a village and into a Vietnamese POW camp. The variation in level height, along with lots of buildings and rocks to hide around, make this level very dynamic. Phu Bai Valley, on the other hand, is the flattest map in the game. Vegetation and trenches make sniping on this map a rewarding challenge, while Vietnamese tanks and American helicopters encourage a vehicular-minded approach. Playing an Engineer and taking down the aforementioned vehicles is a blast.

Along with the new maps, vehicles, and guns, Bad Company Vietnam comes with a new set of trophies and in-game awards. For the Battlefield faithful, it will be a relief to finally have some new patches and trophies to work towards. And for the uninitiated, this expansion makes for a surprisingly good jumping-on point. Thanks to the omission of scopes, the competition is fairly balanced between the high level players and the newbies. The gameplay is still just as good as it was in the past, the graphics are still great, and despite Hill 137 feeling unbalanced and unfair, the overall package continues Battlefield's tradition of greatness. It may have been a long time coming, but this is a meaty expansion that was worth waiting for.
Rating
8.6