Batwing #19 – Review: Selling Out in Hopes of Higher Sales 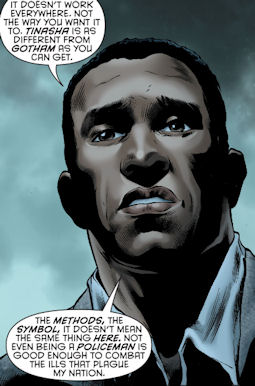 “More Batman” has kind of been the growing mantra of DC Comics whenever the New 52 struggles with anything. It seems like with every wave of cancelled books things get a little more Batman-y. Batman, Incorporated was relaunched after the first wave of cancellations hit. Mr. Terrific ended and was replaced by Worlds’ Finest costarring Batman’s daughter. Captain Atom got the axe as Talon, a spinoff of Batman’s Night of the Owls event, launched to take up the open spot. Batman/Superman is on its way to save us from the next batch of failed DC titles.

When in doubt, make it more Batman-y. And this logic apparently even applies to Batman titles, as we are seeing here with Batwing.

This is the first issue of Jimmy Palmiotti and Justin Gray’s run on the series, and they have been very open about the new direction they planned to take Batwing in. That new direction? Scrap what came before and restart from scratch. It’s the baby with the bathwater logic. Batwing is struggling, so let’s get rid of Batwing and get more Batman.

Honestly, Batwing was always a longshot to hang a series on. The Batman sales machine is only so powerful. In theory, spinning a series off of Batman, Incorporated is a wise decision. But in practice is a whole different matter. Grant Morrison is not Geoff Johns. He doesn’t play that well with others. He does his own thing and is more likely to ignore and undermine your tie-in attempts than cooperate, which is basically what happened with Batwing. So really, Batwing has been out there in the cold with only the Bat-symbol to help it out. The book didn’t even really get to play in many of the Batman franchise events, getting excluded from Death of the Family. Yeah, I know. It wouldn’t be very believable for Joker to be able to take a shot at Batwing in Africa. But you know what? I read that story and its tie-ins. It would still have been as believable as half the ridiculous crap Joker pulled off.

Despite the challenges, I considered Batwing one of the true gems of the New 52. The things Judd Winick did lived up to the promises of DC’s big revamp. It was new. It was relevant. It was diverse. It was just a damn good book.

Everything Palmiotti and Gray have said they intend to fix on Batwing are the exact things I have enjoyed about this book. I like that Batwing was developed in a way that didn’t turn him into just a black Batman. I appreciated that his armored battle suit really wasn’t the focus of the character. And I loved exploring the largely untapped terrain of DC’s Africa for stories. With this issue, all these things are being fixed. Much like you’d fix a dog.

To their credit, the transition away from David Zavimbe as Batwing is handled with respect. The majority of this issue is spent wrapping up story threads from Fabian Nicieza’s brief run and bringing closure to David. Do I particularly like any of these developments? Obviously not. It’s really difficult to sell the idea of a superhero quitting in a way that gets you to agree with their decision, especially a character as new and well developed as David. Palmiotti and Gray really don’t succeed in making the case for him quitting. But I do appreciate that they make a sincere attempt. Too often we see this kind of thing handled unceremoniously by slaughtering characters quickly to move on to the next in line.

There is one part I do take issue with, though. After David quits, Alfred remarks that Batman will recruit his first choice for Batwing as the replacement. I’m sorry, but his first choice? So not only do you fire David Zavimbe as Batwing, but you undermine his time in the role by turning him into Batman’s second choice? Dick move, guys. Sell your new Batwing on his own merits. Don’t break down the original to make him look good. 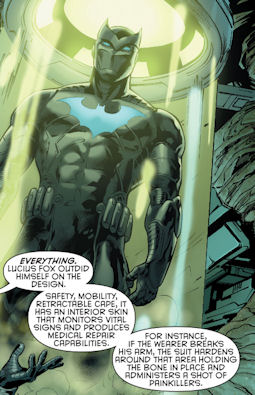 Besides, it doesn’t make the slightest bit of sense that this particular character would even be on Batman’s list for Batwing, much less at the top of it. I’m pretty much the scope Bruce had in mind for Batman, Incorporated involved recruiting people beyond his own zip code for members. And besides that,  I’m fairly sure his qualification for Batwing wasn’t being the first black guy he could find.

It’s hard to judge the new Batwing completely. He appears only at the end, and most of what is known about him comes from Palmiotti and Gray’s recent interviews. First impressions of him are underwhelming, though. He really does sound like just a black Batman. The primary differences seem like they will be an enthusiasm for the job and being a genuinely positive person, which really has always been Dick Grayson’s defining traits. He also has a father who is a prominent character in Batman’s mythos already and whom will not know and wouldn’t approve of him running around with a Bat-symbol. ...Which has been Barbara Gordon’s thing for decades. So it’s not immediately apparent what, if anything, unique he’s bringing to the table.

I’m not sold on the new suit either. I’ve never been in favor of Batwing becoming all about the armor, but that seems to be the only selling point now. It’s weird. Batman seems so impressed with it, but... why doesn’t he just use it? It’s not like the new suit is the clunky thing with the jetpack that David used. It’s more in line with Batman himself, so again, why doesn’t he use it if it’s so awesome?

The increased “Batman-ification” of Batwing may be just enough to keep its head above water sales-wise, but it seems like we’re trading off one of the more unique and interesting stars of the New 52 for a character with much less to offer.