Madder Red might be the best new villain of this year; when he isn’t enjoying the sound of his own voice, that is. His words and actions in Bedlam are as terrifying and uncomfortably hilarious as the Joker’s are in Batman. Unfortunately, Madder Red just seems to love hearing himself talk… well, I don’t after several speech bubbles on one page, but he has his moments. But other than him and some stylish artistic choices, this comic doesn’t offer much else – and is a dragging double-sized 54 pages long.

Ten years ago, the town of Bedlam was ricocheted by the mass murderer Madder Red. After killing dozens of people, Red is taken out by the superhero known as the First (as in the first worst superhero name I’ve heard of), but he has a surprise for the police: he has planted a barrage of bombs in schools. But he doesn’t want money or freedom – no, he wants something much more bloody than that. 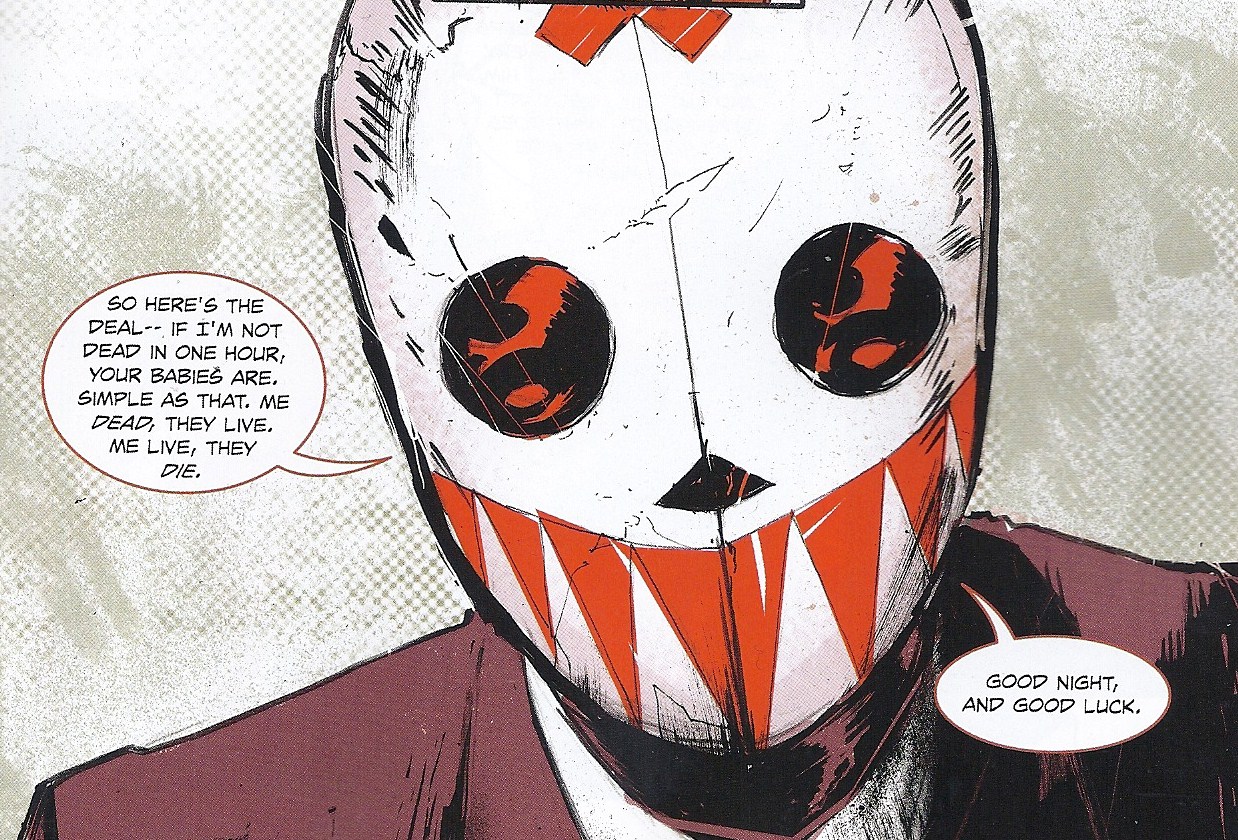 Writer Nick Spencer perfectly introduces Madder Red as the sadistic character he is by way of a room full of corpses and Red playing cards with a terrified child whose mother he’s already murdered. His dialogue and actions are the highlights of this issue. I would watch the sadistic reality TV show he suggested called “My Wife is Gonna Kill Me,” even though this reference had absolutely no point in this issue other than to drive in the already nailed down point that Madder Red is nuts. His plans are demented to the max. But his narration when he is a “regular” man is drawn-out and boring while his actions are just as sick and sadistic as his actions while dressed as Madder Red.

Most of Madder Red’s dialogue is also drawn-out despite staying fun most of the time, especially during his interrogation with Reve. Reve also further proves that no one can match Madder Red’s enjoy ability. Even worse than Reve, who just stands around adding nothing to the interrogation other than an occasional grunt, is the councilman who has a two-page long speech that could have boiled down to a couple sentences. Must be a reelection year. The only other character that could keep up somewhat with Madder Red was a mysterious doctor who seems to have an important plot point in this issue that is still shrouded with a lot of mystery and is one of the only reasons I will be coming back to read more – with the other being to see more of Madder Red.

The opening may be a great introduction to Madder Red, but it is a poor introduction to the artwork. Colorist Jean-Paul Csuka limited his colors to a kind of black-and-white style with spurts of red, mirroring the artistic style of artist Riley Rossmo’s Sin City. The opening pages have people who look like Ronald McDonald because of their bright red hair. I understand a few colorful exceptions, like Madder Red’s mask and his bloody red shirt, otherwise I would have preferred the red color be limited to blood. The character designs are very simplistic and never is that more impactful than with the characters costumes. I love how the First’s helmet reflects images. When he looks at Madder Red the two red eye sockets on Red’s costume reflect well on his helmet.

I expected more to happen in this issue. Nick Spencer had more than enough time in this double-sized issue to set up a series, and while he did successfully set-up a concept that could be intriguing, getting there was very slow with only Madder Red’s actions and words (when he wasn’t enjoying the sound of his voice) keeping me awake and interested. If you enjoy psychopaths, try out the first issue of Bedlam for a taste of Madder Red: just expect to be skimming some speech bubbles. 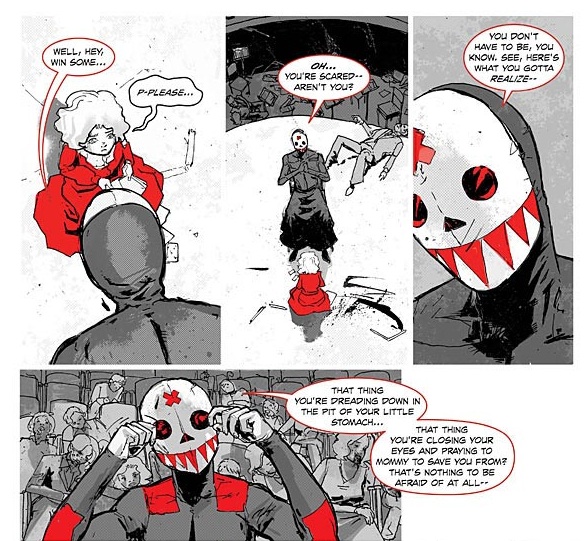