Coming up on its seventh anniversary, Xbox Live Arcade has close to 400 games that cost up to twenty dollars.  So, which of these is worth your hard-earned Microsoft points, and which should you stay away from?  After some painful research I've found the two games that represent the absolute best XBLA has to offer along with the worst.

However, the game that takes the cake is Braid, developed by Number None Inc.Braid is a game where players have to use their wits to get through each level. It starts you off with a nice story line: the main character left the woman he loves and regrets the decision. She gets kidnapped and he goes on a long journey to get her back. You get thrown into a world full of puzzles, patterns and pathways, where you have to choose which way to go and figure out a solution. You hold the ability to manipulate time, controlling the items and creatures around you by rewinding your mistakes or fast forwarding. These abilities bring a whole new way of solving puzzles that will stump you from time to time. 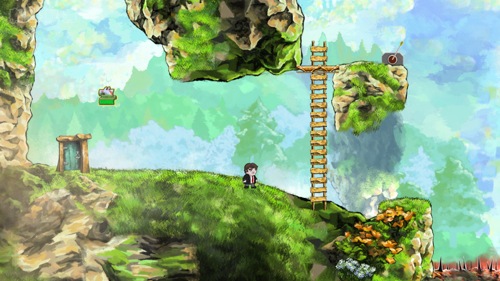 It brings something new to arcade platformers that contain puzzles and trivia. It had a Super Mario feel initially, but I soon found out it has many distinct differences.  I give it a 9 out of 10.  In addition, this arcade game contains an excellent selection of game music. Braid can be found under the top rated and top downloaded section of Xbox live arcade games for 800 Microsoft points.

Although Xbox Live Arcade has a number of great games, there are also those that do not quite make the cut to be considered even an average game. So which one of these below average games is the winner of the title? (drum roll would be perfect right now!) After extensive research and some pain staking first hand tests, I determined which arcade game is the worst, and that game is Rocky and Bullwinkle. Yup Rocky and Bullwinkle, once a cartoon and even a movie (not a very good one if I must say so myself) is indeed a game in the Xbox live arcade, and one that should be inducted into the hall of shame.

Rocky and Bullwinkle boasts graphics that look like bad drawings by a 5 year old (no offense to all those regular Pablo Picassos out there). It is a poor attempt to get you to pay 800 Microsoft points for an interpretation of a once somewhat successful cartoon, and fails miserably. The show barely even has a fan base today and the game isn't based on a specific storyline. All in all, this is by far the worst Xbox Live Arcade game that I have ever come across.

So in the end, these games are just two examples that show the wide array of games and game quality that are available in the Xbox Live Arcade.