Each genre of games has its very own core element that makes it unique when compared to other games.  Role-playing games have the numbers and the stories, puzzle games have the intelligence quotient, strategy games have the tricks and the mental gymnastics, and shooters have those wonderfully satisfying objects known as guns.

In light of the upcoming release of Gears of War 3, I’d like to take the time to list some of my favorite boomsticks from the series as well as a few others that hold a special place in my heart.  This, like many other lists of its nature, is not definitive, but open to interpretation and debate.  Take these as simply the ideal arsenal I would carry into battle, which like many of the far-fetched scenarios in the games these weapons come from, is highly unlikely to ever happen.

According to the lore behind the series, the mainstay weapon of the Gears franchise used to have a standard bayonet attached to it.  However, when the Locust invasion increased in intensity, so too did the COG (Coalition of Ordered Governments) have to resort to a more brutal alternative.  Well, they added a chainsaw.  From the first time I saw Locust guts splatter all over my screen, I was in love.  The chainsaw bayonet on the Lancer is still one of the most satisfying ways to let off steam after a tough day, not to mention that the gun itself is pretty effective with its decent range, quick reload, and large magazine.

I admit it; I’m a sucker for shotguns.  Ever since finding out about “aiming up” with the shotgun in the first Resident Evil, I’ve never been able to resist the firepower of a good sawed-off.  The Hydra, which has three (!) barrels of stopping power, remains my weapon of choice when plowing through endless hordes of enemies in Mercenaries mode.  Not only does it have three barrels, but it also has great range for a shotgun and a wider spread than its counterparts.  To get an idea of how powerful this gun is, look at the characters recoil when they fire it, it’s almost as much as firing the rocket launcher.

Having never shot an actual bow in my life (unless you count plastic coat hangers), the Torque Bow does a great job of mimicking the sensation I would expect if I ever did shoot one.  From the way the targeting reticle gradually rises the longer you hold the trigger to the thump of the bolt hitting the target, the Torque Bow definitely makes the player feel like they’re shooting something rather than just pressing a button.  Oh, and if the bolt itself doesn’t hurt enough, it explodes after a few seconds of being lodged in its target. 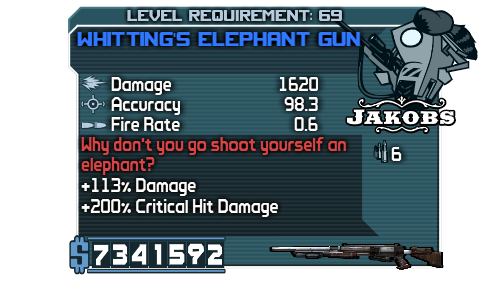 While Borderlands is packed with randomly generated weapons, there are a few specific weapons that drop off bosses throughout the game.  Whitting’s Elephant Gun is one of them, and what it lacks in accuracy, it makes up for in power.  Just one shot from this monster will kill most enemies (provided you hit them and that your character is proficient with sniper rifles).  The above qualities aren’t very unique for guns when it comes to shooters, so the main reason this giant-killer is on the list is because it reminds me of a hilarious scene from the movie Tremors (link here) in which one of the ancillary characters pumps a zillion rounds into a giant underground worm, with his elephant gun delivering the coup de grace.

Sure, you can only fire it outdoors, when the satellites are aligned properly, and it takes some time to lock on and charge up.  All cons aside, this weapon literally blew up the entire planet of Sera in an attempt to halt the Locust advance on humanity.  Ever wonder why the environments in the Gears games are so bland?  It’s because of the Hammer of Dawn.  This weapon packs so much punch that if it were available for the entire game, it would make it feel closer to this than a post-apocalyptic struggle for survival.  I don’t know about anyone else, but when I hold down the trigger for this weapon, I’m pressing it down as hard as I can.