This has been a bad year so far for the Xbox, at least when compared t the first half of last year. In early 2010 games like Mass Effect 2, Bad company 2, Bayonetta and Red Dead Redemption were all released to huge critical acclaim, and massive sales.  Alas, only a couple of big games this year have lived up to their hype and they’ve been multi-platform releases.  Struggling to redeem our platform of choice, our Xbox team of Charles Battersby, Curtis Bloomfield and Alex Martinet look back at the best Xbox games of the first half of 2011.

The third best game of the year so far is an Arcade title that shows you don’t need a massive budget to make a great product.  It just hit XBLA today, and you’ll be hearing a lot about it for the rest of the year:

Charles:  Ms. Splosion Man.  There’s a lot of fun crammed into this low-priced download.  Ms. Splosion Man is a challenging, addictive platformer, and it’s genuinely funny.  It throws new types of gameplay at you constantly, and provides an equally robust multiplayer mode as well.  Plus it has lots of collectible shoes.  Oh My God SHOES!!

Second on our list is the latest revamp of a Klassic fighting franchise: 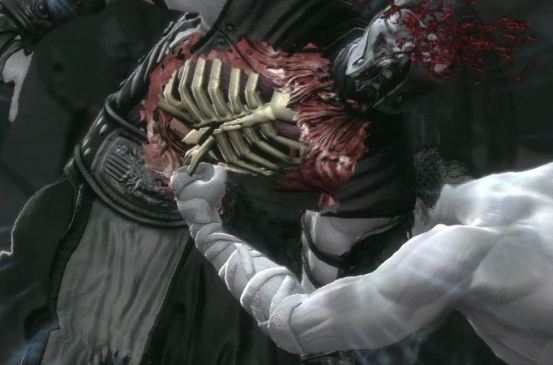 Alex: Mortal Kombat. Get Ready to fight, FIGHT. This is the best game in the franchise and forgives mistakes that were made. The fatalities have never been better, even though they might be a little bit over the top. After Mortal Kombat Armageddon, the future of the MK series was in darkness. but now we finally have a MK that stick to its roots and we can look forward to DLC and possible sequels that might ensue. It's time for M-O-R-T-A-L K-O-M-B-A-T

Charles:  A lot of fans of the original Mortal Kombat games from the 90’s had abandoned the series, but the most recent one has one over new fans, while soothing sore feelings of many ex-fans.  It also has a steady supply of DLC packs to keep it interesting, and uses the new “Season Pass” for the DLC, so dedicated Kombatants can get it all on the cheap.

At the top of our list is a hard-boiled tale of murder, mystery and hard-boiled detective work:

Curtis: L.A. Noire is by far one of the top three games to come out for Xbox thus far in 2011. It gives gamers a life-like detective experience. They are thrown into a world where they must find clues and use those clues to solve crime cases. This game is arguably one of the best game of the year!

Charles: I’m always happy when games pick very specific time-periods and settings.  Too many are set in generic “Near Future”, or “The Present Day”, and I love the way that Rockstar sets their games in very distinctive places and periods like L.A. Noire.    The use of real historical cases is great touch as well.  Definitely one of best games of the year.

Alex: I had high expectations of L.A Noire and it surpassed all of them. A Noire storyline, twisted characters set around Los Angeles in the 40's, Sign me up. L.A Noire was truly a one in kind experience. Everything from the sound, memorable cases and storyline. to the  As it stands right now L.A Noire is my Game of the Year.

Curtis:  Cthulu Saves the World is the next game on my list. Indies have never really been on my good side but this one has made a fan out of me! This game can be as fast paced as you want it to be and at the same time keeps gamers attentive. Cthulu is the main character who is as funny as he is strong (and he is pretty strong).  The humor in the game kept me wanting to move on from one level to another just to see what this guy would say next!

Charles: I agree with Curtis on Cthulhu.  While this isn’t a pretty game, it is a very insightful satire of the gaming industry, and among the best of the Indie games on Xbox Live.  It also costs a tiny sum, making it a great use of your Microsoft points if you only have a few dollars left.  Would have been in our top three of 2011, unfortunately it came out on December 30th 2010.

Alex:  MLB The Show:  As someone who enjoys watching Baseball, MLB The Show was right up my alley. The little things make this game stand out from other series. From the presentation to the visuals, MLB is the best sports game to date. NBA 2k11 is a close second but what separates them is The Show. It feels like a part of the game rather than just an add on.

Read our reviews of Mortal Kombat, Ms. Splosion Man, LA Noire, Cthulhu Saves the World, and MLB The Show.  What was your favorite Xbox game from the first half of the year?  Tell us in the comments below.