"Fallout 4 Looks Great, Coming Out This Nov. 2015"
By: Zack Zwiezen | PC Features - PS4 Features - Xbox One Features | June 15, 2015
Bethesda’s first E3 press conference was a lean and focused event. No celebrities, no concerts, no weird comedy skits, none of that. Just games. Not many, but what they lacked in quantity they more than made up for in quality, at least from what we saw. 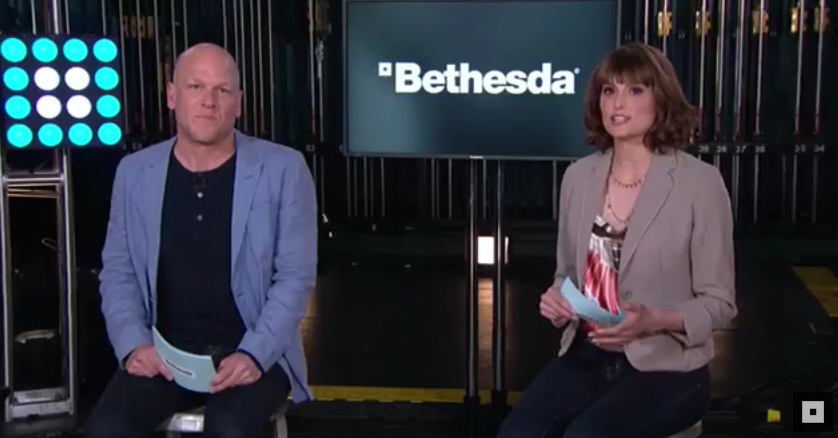 
The night started with a small pre-show starring Adam Sessler and Morgan Webb. It was great seeing the former X-Play hosts back at it. Sure, they were not saying much, but I did enjoy the segment where they talked to Fallout fans and let the fans talk about all the hard work and effort they have put into their costumes.
After the pre-show it was time for the conference to start and it started with a bang. A violent and messy bang.


The first game that Bethesda showed was the new DOOM. Simply named DOOM, it seems like a return to a more classic feel, while still looking like and playing like a modern shooter.
Marty Stratton, Executive Producer on DOOM, explained that this new DOOM is like the original. Simple, fast and filled with demons to kill. After that brief introduction the DOOM gameplay demo began. The first thing I noticed was how good it looked. This new DOOM is running on Id Tech 6, or as Pete Hines called it “Id Tech 666”.  It looked amazing. 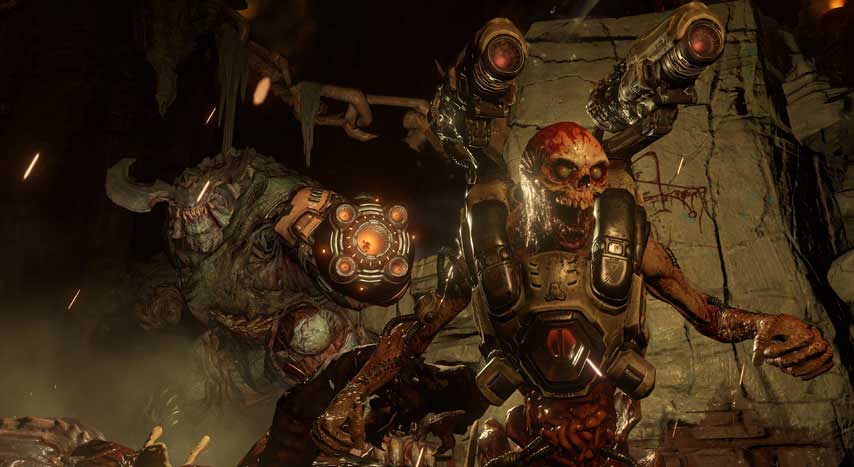 The next thing I noticed was the speed of the gameplay. Not as fast as the classic Doom, but much faster than Doom 3. The majority of the demo was played with a shotgun and it tore enemies up. Arms and limbs would fly off and if you get close to enemies you can do a nasty execution. No reloading either, just shoot until you run out of ammo. No fall damage and no regenerating health either. This is a Doom game that is trying to recapture some of the feel of the classic Doom. And I liked what I saw.
Another interesting thing to note was the increased mobility the player had in the demo. They could leap over railing, climb boxes, sprint and dodge out of the way of attacks. It looked intense and later, in a second gameplay demo set in Hell, the speed of the combat really seemed to make the fight feel exciting. I can’t wait to see more. But I’ll have to wait until Spring 2016 to play DOOM. It’s coming out on PS4, Xbox One and PC.


An interesting surprise that Bethesda showed was SNAPMAP, a new tool built into all versions of DOOM. This tool allows for players to create maps, gamemodes, missions and more. They can then share these with other DOOM players. It sounds like SNAPMAP will be cross platform, so I assume that PS4 players will have access to maps that are made by Xbox One users.
Bethesda.net will be powering all of this. And Pete Hines says that Bethesda.net “Will be at the heart of all our games going forward.” He explained that Elder Scrolls Online is already powered by Bethesda.net and that all of their websites and forums will be powered by the service.


Dishonored 2 is coming. That is official. No gameplay was shown, but we had a trailer that showed a woman character named Emily. You will be able to play as either Emily or Corvo. Each of them will have their own abilities and weapons. Beyond that, there wasn’t much revealed about the new Dishonored. It’s coming... at some point to Xbox One, PS4 and PC. No release date or window was given, but next year seems likely.
Also that rumored Dishonored Definitive Edition will be coming to PS4 and Xbox One. It contains all the DLC and will also have improved visuals and performance. That is coming later this year, Fall 2015.


Battlecry made a short appearance, a new trailer was released and Bethesda thank the players who are currently beta testing the game for them. They will be expanding the beta in the future and the gameplay they showed in the trailer looked nice. I’m not terribly excited about Battlecry, but it could be fun.
A surprise announcement was made, Elder Scrolls Legends. This is a mobile and PC based card game that will have online multiplayer and will also be free to play. Sounds like it might be not unlike Hearthstone, which isn’t surprising after how successful that game has been. Elder Scrolls Legends is coming out later this year for PC and iOS.


Bethesda showed a ton of Fallout 4. Nearly 30 minutes of gameplay and video were dedicated to Fallout 4. And the game looks amazing. Huge and highly detailed worlds filled with tons of stuff to do and things to see.
Fallout 4 starts before the bombs dropped. You create a character, male or female, and quickly the bombs are coming. You rush to the bunker and... that's about all Bethesda showed us. After that intro we cut to 200 years later. No word on how our character was able to live that long, so speculate away. Exploring the wasteland looked incredible. VATS is back and looks great and the combat seems improved. There is a more dynamic feel to conversations as well. You can do conversations from the first person or third person perspective. Overall Todd Howard was very clear that this game is filled with options. You can play it how you want. And it looked great.

A few other things to mention, you can build your own bases and set up trade routes between them. Perks are back and so are molerats. Fallout 4 will have similar menus and gameplay mechanics as 3 and New Vegas, but all of it looked more polished and smoother. More sleek. For example you can turn your wrist around while using the Pip boy. You can also find games and play them on your Pip Boy, one of the games looked like a version of Missile Command. There was a lot shown of Fallout 4, so we will have a separate piece talking about everything we saw.
Oh and you won’t have to wait long. Fallout 4 is coming to PS4, Xbox One and PC November 10th, 2015. I can’t wait.

A surprise announcement was Fallout Shelter. This is a mobile free to play game that let’s you build your own Vault and control what happens inside the Vault. You can even send people out to the Wasteland and they will level up and find loot.
Todd Howard was very clear that this is not a “Free to play” game like some others. There are almost no microtransactions. You can buy extra loot drops, but thats it. No timers. No paywalls. No stamina meters. Todd Howard was clear they wanted to “make a game that we wanted to play.”
Fallout Shelter is available now on iOS. Now word on Android or Windows phone yet.


Bethesda did a great job focusing on games and showing off the games. No awkward celebrity hosts or boring movie tie-ins. This was a fast paced and bare bones event that was focused squarely on showing and talking about games. And what they showed looked great.
Fallout 4 looks amazing and looks like a game that will sucks months of my life away. Fallout Shelter looks fun. Elder Scrolls Legends could be cool. DOOM looked exciting as hell. Dishonored 2 sounds like more Dishonored, which is a good thing.
When the conference ended, I was excited not bored. I can’t wait to play most of these games and luckily, many of them aren’t that far away. A great first conference for Bethesda.