"An enjoyable episode because it ignores the premise of the series."
By: Alexander Wong | TV Reviews | March 22, 2016
It says a lot when one of the stronger episodes of Better Call Saul: Season 2 doesn’t really focus on the title character. As I said last week, I’ve been waiting for something to act as the narrative “through-line” to make me care about Season 2’s story, but I didn’t expect Jimmy to be sidelined for this to be a possibility. Granted, putting Kim and Mike in the spotlight made for a largely entertaining episode, but it’s not promising that the central conceit of the series – Jimmy’s transformation – continues to drag the show down. In spite of this, “Bali Ha’i” actually opened with a very interesting scene featuring Jimmy. He began the episode having a hard time sleeping in his new bed, so he went to watch TV (“Ch-Ch-Chia!”), resulting in him finding out that Davis & Main replaced his commercial with something more "corporate." Instead of Jimmy’s anger at this move driving the episode, he again tried to go to sleep, only to once again find he cannot, leading to him using the decorative basket balls as actual ones – kicking, throwing, and bowling them to pass the time. Even though Jimmy having difficulty sleeping was a cliché device to say something’s not right with his life, I really enjoyed him kicking the decorative balls. Maybe I’m not doing things right, but it felt like something you do in a hotel, like jumping on the bed, not something you do at the place you call home. Again, the framing of the wrong bed and the right bed at the nail salon was kind of easy, but it allowed for a more nuanced way of saying that something’s off. [caption id="attachment_81398" align="aligncenter" width="600"] 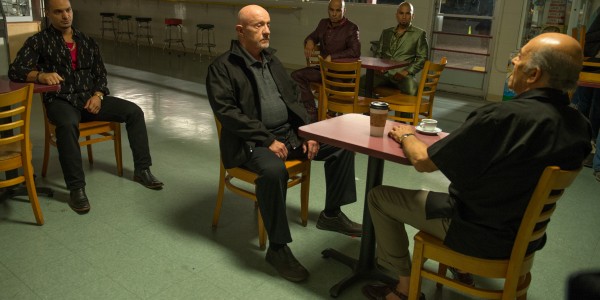 Better Call Saul Season 2, Episode 6 - Photo Credit: Ursula Coyote/ Sony Pictures Television/ AMC[/caption] Compared to last week, Mike’s storyline began to pick up. Not because of the added danger (which was expected), but because it had a certain flair missing from previous moments in Mike’s Season 2 storyline. While the “Welcome” of the welcome mat felt like weak irony when Mike first put it down, the fact that he used it to see if anyone had come to his house was pretty awesome. Even if Mike’s journey already feels played out, it gave me hope that whatever comes next will have some redeeming qualities. My reception to the threat itself, though, was a little more mixed. The Better Call Saul debut of the Cousins introduced a sense of danger similar to when Tuco first appeared in “Uno”; however, I’m disappointed that more and more Breaking Bad characters are showing up. It makes Better Call Saul feel a little too beholden to its forerunner, and I hope it doesn’t come at the expense of more original characters making an appearance. Meanwhile, Kim’s storyline is accelerating much faster than I expected. Instead of her leaving HHM at the end of the season (involuntarily, somehow as a result of Jimmy), as was indicated last episode it looks like she’ll be leaving herself, and soon. The progression of her storyline still doesn't feel completely thought out, but I loved how the series made HHM out to be a poor fit for her. Rick Schweikart's story about when, like Kim, he was left in an unwinnable position felt so real and interesting, particularly that line: “it never really sat well with me.” In terms of weight, his conversation with Kim actually made me think of Mike’s speech about morality in "Pimento," which has been one of my benchmarks for the difference in quality between the seasons. [caption id="attachment_81397" align="aligncenter" width="600"] 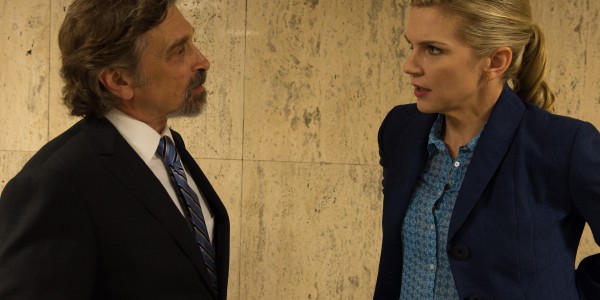 Better Call Saul Season 2, Episode 6 - Photo Credit: Ursula Coyote/ Sony Pictures Television/ AMC[/caption] I also appreciated the conversation between Kim and Jimmy. As someone who thinks that “Switch” was an unnecessary step backward for the series, it was nice for Kim to say that Jimmy “knew what [he] wanted” when he was floating in the pool, and that she got in the way. It doesn’t make what has happened as a result of this move better, but the almost-acknowledgement made me hopeful that the series can reset itself at some point. Better Call Saul managed to deliver an entertaining episode this week. The use of some obvious scenarios and metaphors hampered the experience, but substantial dialogue and moments kept me engaged. The series refocusing on Jimmy will likely bring back every problem I have with the current season, but for now I’m just happy the episode wasn’t the chore I expected it to be. [caption id="attachment_81396" align="aligncenter" width="600"] 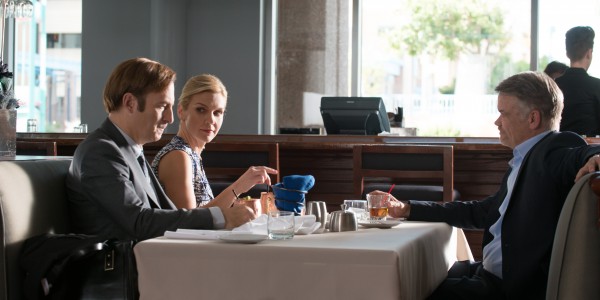