A United Kingdom served as the opening gala film for the 2016 BFI London Film Festival this year, from Belle director Amma Asante. Starring Selma’s David Oyelowo and Gone Girl’s Rosamund Pike, this film is based on the true story of this unlikely couple: a prince of Botswana and an English typist who fought for the right to love and equality in the 1940s.

Set in equal parts in the grand, grey streets of London and the dusty sunlit plains of the then-called Bechuanaland, the film’s message of unity is delivered brilliantly through the cinematography of contrast and separation. 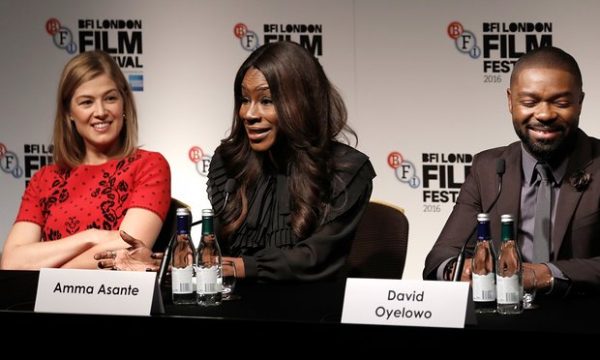 Structured around duality, A United Kingdom essentially depicts the movement to oppose apartheid  spreading from South Africa to Botswana. Appropriately so, the visual contrasts are effective. Not only Seretse’s dark skin and Ruth’s white, but the contrast between London and Botswana, between how the couple act when they are alone and how they act when they are in front of people. The unity of the couple in the face of all the opposition they struggle against, the personal love story, brings heart to what could have been an unbearably intense purely political drama.

The actual falling-in-love part, which is so often the focus of many films, is done very elegantly. A wonderful moment where Ruth Williams overhears Seretse Khama chatting politics with his friends at a party leads to a montage of quaint and lively dates, dancing at jazz bars, and foggy evening strolls. The love between these two people serves as the foundation of the whole story, and the foundation is built both quickly and strongly, leaving ample time for the real story. 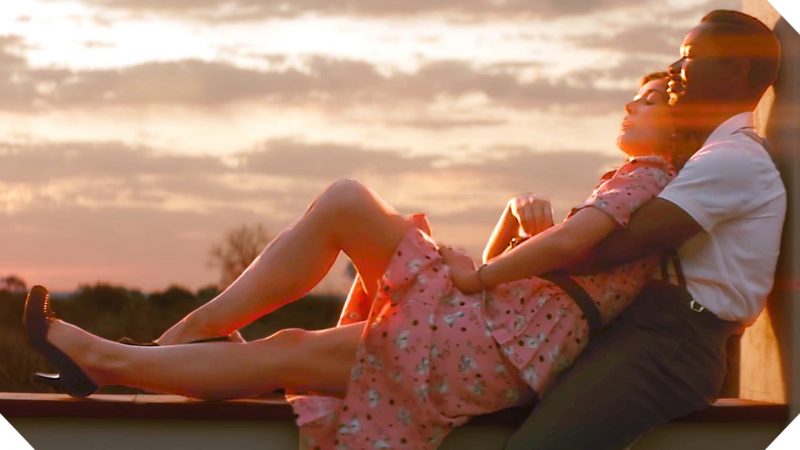 Oyelowo plays the perfect hero: distractingly charming, politically sharp, noble, and unswervingly loyal, both to his wife and his people. Anyone who has seen him in Selma would be expecting an unfailingly spectacular performance, and that’s precisely what he delivers. The body of the film hangs on a skeleton of three speeches delivered by Seretse, first to his people, imploring them to accept him as their leader with his wife at his side, second to a British court, explaining the injustices done to him by the government and asking for support, and thirdly, a victory speech in which he essentially implement democracy in Botswana. All three Oyelowo delivers with tears in his eyes, with a fervour and dedication, shy enough of desperation, that is so utterly convincing that I’d vote for him as Prime Minister if there was an election tomorrow.

After the calculating, manipulative, terrifying character she played in Gone Girl, Pike’s Ruth is like a breath of fresh air. The balance of the film rests delicately on Ruth’s character - her love for Seretse must never be in question, her motives never under suspicion from the audience. The Brits  make her an outcast for marrying a black man, and the people of Botswana refuse, at first, to accept a white woman as their queen, implying even that she only married him for his power. With everyone casting aspersions on her character, the audience only ever sees a smart, caring woman - Seretse’s equal in intelligence and grit in the face of hardship. She never comes across as entitled to her position within his tribe, and her charm and eagerness to learn soon win over the initially hostile people. Her grace and strength and determination make her moments of emotional vulnerability even more moving. 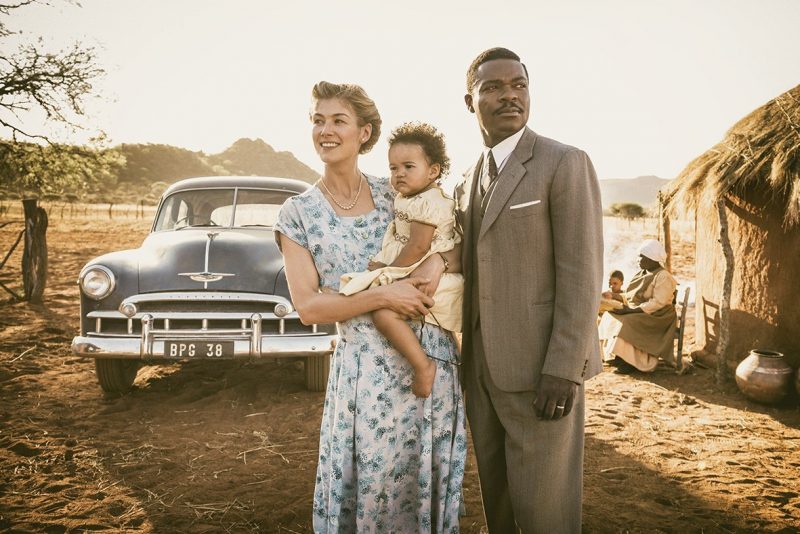 Also worth mentioning are Jack Davenport (Pirates of the Caribbean) and Tom Felton (Harry Potter), who play the smarmy British government officials responsible for African affairs. Davenport’s perpetually smug air is threatening at first, as is the ease with which he abuses his power. As the film progresses, though, and as our heroes gain the upper hand, it’s his fall from grace which is most satisfying. Felton plays a conceited governor, whose spoiled-child manner again is sinister and comedic in turns. The two of them act as the face of the opposition from the British end of things, as Seretse’s uncle, played by Vusi Kunene, does in Botswana. A father figure to Seretse, he attempts to balance his love for his nephew with adherence to tradition in an understandable conundrum. The opposition that the British have to the marriage is never entertained as being acceptable - it is clearly portrayed to be a mixture of racism and concern at losing South Africa as an ally. The Botswanan reservations, however, based in cultural tradition, are treated with more appropriate respect.

A United Kingdom delivers a resounding message that equality and unity will triumph over racism and bigotry, and it’s sad that in 2016 that message is still as important as ever. Progress indeed has been made, but not enough. The film ends on photographs of the real Seretse Khama and Ruth Williams, driving home the fact that this actually happened. The enormity of what these two individuals achieved is truly inspirational and incredibly moving. A beautiful film with a powerful message.