It’s Valentine’s Day, a day for lovers and for the loved, so let’s look back on that still wild territory – romance. More specifically, however, to broach the subject of how such an area lives, thrives, and survives (and sometimes doesn’t) within comics.

Whatever you want to call them – Superhero comics, Cape comics, "Big Two" comics – the big audience drawers, they are a product that is specifically designed to be an outlet of neverending stories. Within such a realm the normal rules of boy-meets-girl or what have you don’t, and really can’t, find footing. The status quo for such things are too great, since everything needs to stay it its own place, stagnant really, so that every new writer can pick up wherever they want. There is little leeway for relationships to foster and to grow within such a model unless, of course, there is the conscious effort to make it.

It’s the will-they-or-won’t-they, the Sam and Diane, the Ross and Rachel, it is formula and it works. So of course there is little hurry to try to change that and to shake things up. As the old saying goes, don’t try to fix what isn’t broke. While there is, in the end, an obvious decision for the businessmen behind it the affair leaves the reader in a precarious situation – reading stories that are getting stale. While things are “meant” to stay a certain way for the story at hand, the audience is left with a sense that nothing matters. No progression, no urgency, and no purpose. If there is no sense of there being a “happily ever after” or even things that take place after such a thing, then some wonder why they should even care.

It’s not just the business side of things either, but the very writers themselves have this very effect on the characters and with stalling their progression. Three words: One More Day. Two more words: Joe Quesada. It’s the comic book equivalent of lunatics running the asylum, if one excuses the hyperbole. Now there is nothing wrong with having someone who loves the character and understands them writing said character, but there is a point where it grows into something akin to rampant ”fanboyism”. The hero/heroine can’t be in a relationship since they weren’t when the writer first read them, or that they can’t get married with their respective love interest because they were always on the fence, and so on. Be it whether they have in their minds that there is a “definitive” version that only they are the keepers of, or that they simply only know how to right what they are most familiar with it all leads back to the same place – fossilization of the concepts.

Crises, retcons, revisions, editorial ham-handling, you name it and it has happened for the sole purpose of resetting characters back to base point. Ralph and Sue Dibny, Peter Parker and Mary-Jane Watson, Apollo and Midnighter, Lois Lane and Clark Kent – the list goes on and on. It’s lucky that a few older relationships (say 40+) get to stick around due to the exact familiarity that damns other ones while the younger (-30) range burn out to fast to even be called to have any sort of luck. Even the ones that seemed older than dirt and set in stone, fueled by nostalgia through all fields, can be tumbled when some bigwigs feel the need to set things up to attract new readers, and that means things have to be redone as much as they were undone.

Yet, and there is a yet, a few can still survive. Relationships, partnerships, and marriages even – they can still stick, like glue, no matter what has transpired. To name quite possibly one of the most famous relationships in the “Big Two” is the headliner of Marvel’s First Family – Reed and Sue Richards. They dated, got married, and had kids even. Real actual progression. Sure it might have stalled in the decades since, but it still showed the evolution of romantic entanglements and how such are still possible.

On the other side of the Big Two there is the unlikely pair of Aquaman and Mera, whose marriage even survived the colossal undertaking of The New 52 which undid much more touted relationships. Fluke or not, temporary or not, there is still the chance that love can thrive within a status quo happy industry. In fact, supposed facismiles of the original Apollo and Midnighter are set to make their appearance within Stormwatch and in companies other than the “Big Two”, like Image, relationships are given endless potential. So, while there is an overbearing amount of negative will, sometimes things do find a way. That's the light at the edge of the dark.

Anyway, in the end, as long as there is ink on those pages not even the insistence of corporate stooges can get rid of those memories. Sure the real-life practices of the Big Two are aggravating and get in the way of telling respectable stories, but when put into the fictional context it’s nothing to get into a twist about. Feel free to tell us of your favorite character relationships and pairings in the comments section as well as your opinions of the subjects broached here, and have a happy Valentine’s Day! 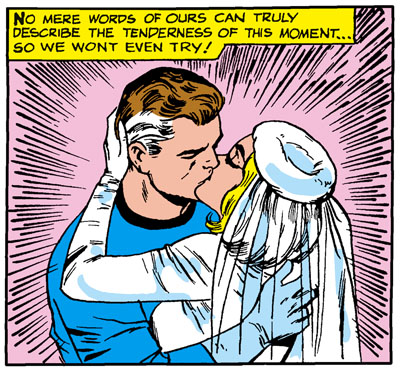