As BioShock Infinite joined the ranks of games available to the general public, the anticipation years in the making was finally broken, and I don’t think there was a single soul disappointed. For those who take the time to understand what Infinite has to offer, it will turn out to be one of the greatest games this year, and perhaps ever.

I could talk about the graphics, or the sound, but the really important thing here is what everyone has come to love from BioShock, atmosphere and story. Plenty of games have shooting, running, things that are seemingly magic, but so few have a story so profound and powerful that it draws you back again and again. Infinite achieves this and more. Much like BioShock 1 did, it flips the tables on you, though not nearly in the same way as 1. The atmosphere is in stark contrast to the world of Rapture, where we saw a city past the brink of collapse. It wasn’t as much a city anymore as a wasteland. However the same doesn’t go for Columbia in Infinite. Columbia isn’t dead, but rather dying. We don’t join in after the destruction of the city, we join in as it is happening. Philosophically, the ground is shaking beneath our feet, wherein Rapture it had already cracked and broken. This change in timing with the story not only makes it feel fresh compared to the first BioShock, but also shows off Irrational’s chops for making worlds that feel real. Up until the first point of controversy, I felt like the world was alive, like its heart was beating strong. I explored and was content just w andering, taking in all of the sights. The world is without a doubt something that not only seems plausible, but can be easily related to modern day life, and for that the atmosphere can only be described as real.

In terms of story, without revealing a single bit, it is incredible. This section is going to be full of buzzwords, but in this case, they are entirely warranted. It really takes you on a journey and in terms of my own personal expectations, shatters them. It isn’t the same story as BioShock 1, which seemed to be a slight fear held by many, although it doesn’t fall short by even an inch compared to 1, and in my opinion, far exceeds it. There is something so incredible about the story, and although I’d like to go into more detail here, and probably could for hours, spoiler free is the aim. 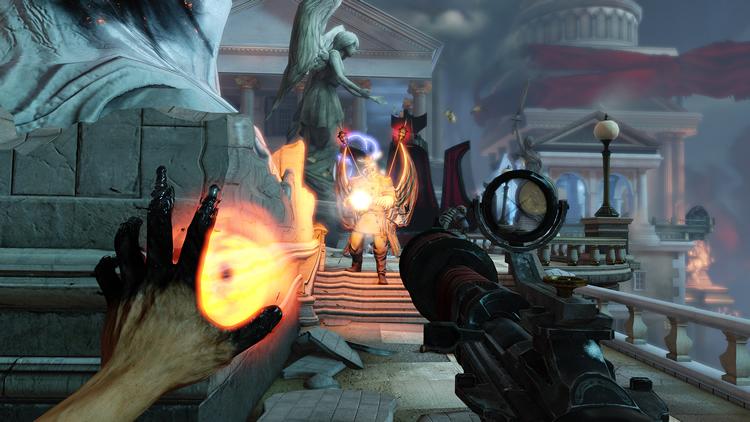 Moving on to actual in game mechanics, the sound design of this game is impeccable. From the first second of the game, you can tell just how consequential this game is going to be. It opens with beautiful voice acting, and as the ocean scene comes into the view, the sound of the storm combined with the ferrymen talking drags you instantly into a foreign world, something many games fail to do at all. The voxophones (audio logs much like the previous BioShock games) are all well put together, and provide quite a lot of depth into a changing world.

The fighting is no departure from the earlier games, and in fact mirrors it in many ways. Just like before there are plasmids, although now they are called “vigors”, and while they function the same, a new use was added. Now after being charged, they can create traps that the player places down, which will trigger some effect unique to the vigor when an enemy comes near. These vigors are new and fun, and while they feel a tiny bit less necessary compared to the earlier plasmids, they still make for a good amount of entertainment. The shooting part of this fps also keeps in close quarters to its predecessor, only altering the amount of guns you can hold. Previously, a myriad of guns were at your disposal as you wandered through Rapture, however in Columbia you’ll have to pick between 2 at any point in time, with a constant melee weapon occupying a third slot. This choice to limit gun capacity was wonderful, because it made me feel as though I was making important choices with my weapons, and I found myself attached to a certain style of gameplay. It also makes more sense in regards to the newest mechanic addition : the sky hook.

This weapon is so cool that it needs to have its own paragraph. Using this weapon, you can ride around transportation rails all throughout Columbia, which allows not only for movement, but an interesting new way to experience combat. While you can sit back with a long range weapon and pick off your enemy, there is also the option to take your shotgun in hand and hop on the rails, flying towards your enemy. From the rails you can not only shoot with whatever weapons you may have, as well as use vigors, but you can also target a certain enemy and lunge at them in a full on attack. It doesn’t feel gimmicky, and the achievements attached to using the rails don’t feel forced at all, but really push the player to do things not out of the question. The sky hook and rails are such a well thought out mechanic that their addition to the roster of BioShock mechanics feels completely natural and buffs the game up higher. It would have been a great game without the sky hook, and was a much better one with its inclusion.

Now I’ve found that I’ve said so many things praising this game, and have yet to touch perhaps the single greatest thing about this game, which is (unsurprisingly), Elizabeth. She is perfect. Of course, there are a few times where she can get wonky, but for 99% of the game at least, she will be a real person. She runs around, she checks things out, she interacts with the world in a way a real person would from her background. It is apparent the time put into making her so tangible as a character, and the game thrives because of it. While being a constant escort quest for most of the game, she doesn’t feel like a burden, which may be the first escort quest ever to not feel the flame of player hatred. In reality, she is so important to not only the story, but also the gameplay. While in fights, not only do you not need to protect her, because she will take cover herself, but she will throw you salts to refresh your vigors, ammo, and even money that she finds scrounging around as you play. Everything about her made me actually care about her as a character, and for that piece alone, this game is fantastic.

However when you take every piece I’ve mentioned, I find myself in a hard place to be. As I played the game, I searched for flaws, and only found petty ones. For instance, there is a violin player that I cannot tip by throwing money into his case. That’s the worst I could find. But when you take these pieces, (barely) bad and good, and put them together as Irrational has done, what happens is something incredible. It transcends playing a game, but becomes an experience. When I talk to people about this game, I say I experienced BioShock Infinite, not that I played it. Because honestly, this game is brilliant. It is a radiant gem for video games and the video game community. While many people only play games to have fun, this game isn’t about having fun. Honestly, using the term “fun” for this game is wrong. Columbia is a horrid place, and therefore we need a new word besides “fun” for Infinite. Thoughtful is the better word here. This game will make you think, and will challenge your perspectives on things if you only give it the chance. I implore you to give it that chance. Give Irrational Games’ baby the 10-12 hours it asks of you, and it will pay you back with countless hours of thinking and pondering. It is worth your time. Play this game. It is the best game I’ve ever played, and I have a strange feeling if it doesn’t take that spot for you, it will at least be top 5.