I have a shameful confession.  I loved BioShock 2.  I also adored the first BioShock, but many fans of the first game didn’t care for the sequel, which was developed by a separate studio.  Some people think of the upcoming BioShock Infinite as the “True Sequel."  Despite my affinity for Rapture and both games set in it, I am still as excited as anyone about Irrational Games' next BioShock, even if Rapture is being left far below.

Instead of being set in the crushing depths of the sea, BioShock Infinite will take place in the endless expanse of the skies over the early 20th Century.  An illustration by the first game’s Art Director, Scott Sinclair, explains the concept succinctly below: 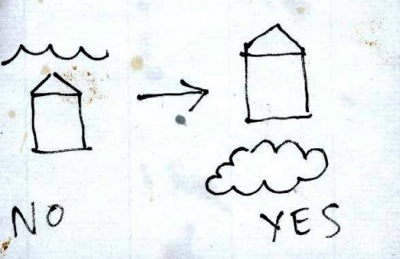 Armed with this sage advice from his predecessor, the Art Director for BioShock Infinite, Nate Wells, pointed out the pitfalls of doing a sequel in an industry where sequels are always expected to be BIGGER.  He compares this to the mindset of cavemen hunting larger and larger game:  ‘Today we’re going to hunt a buffalo. It’s pretty much a big raccoon. We’re just going to do what we do in raccoon hunting, like, more.’

Avoiding “the same, but more” attitude, this new game seems to be a spiritual successor which takes many of the abstract ideas of the first game and applies them to a whole new time, place, story, and characters.  Fans of the series must know by now that the new game is set decades earlier than the previous two BioShocks; however it is not a prequel.  Infinite has nothing to do with Andrew Ryan, Frank Fontaine, Big Daddies or Little Sisters.  The protagonist is not the mysterious Jack, or Delta.  Its main hero will be Booker DeWitt, a former agent of the Pinkerton Detective agency.

Of course, Jack and Delta weren’t really the stars of the first two BioShock games.  Rapture the underwater city was the true main character.  In Infinite, the city of Columbia will be the new setting.  Columbia is the embodiment of America and the notion that America is the greatest nation on Earth; unique and exceptional.  It is a vast floating city/battleship, intended to awe and inspire the lesser nations of the world and, if needed, blast them full of freedom holes! 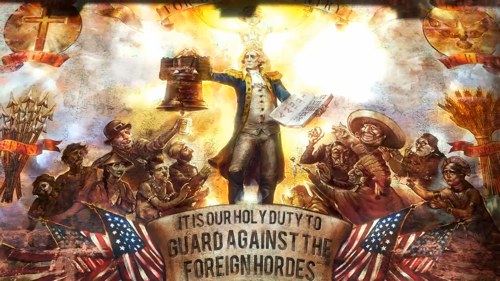 The city is filled with high-patriotism, and Columbia’s ruling class, led by an upright man named Saltonstall, is trying to keep the riff-raff foreigners from muddying up Columbia’s gene pool.  For some reason, these heathen foreigners and members of the wretched underclass don’t want to be treated like the filthy vermin that they are, so they’re waging a revolt against the good folk of Columbia.

Or at least that’s how I’m interpreting the story.  I’m sure that the backstory of Columbia is more complex than that, but I might have just been swayed by the historically-authentic propaganda posters and slogans which the game has; all of it promoting xenophobia, eugenics, and American Exceptionalism.

DeWitt is caught in the middle of this civil war and will have to deal with enemies from both sides of the fight.  The game employs an unusual form of AI that will make Columbia’s inhabitants rather unpredictable, instead of everyone just attacking on sight like the Splicers from the previous games. 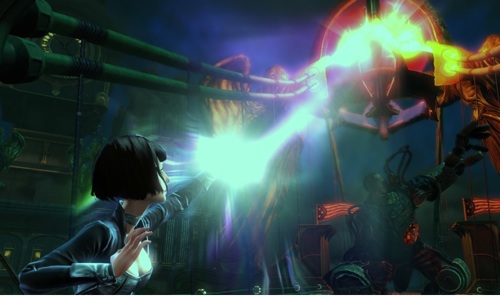 Instead of shepherding a helpless Little Sister as in BioShock 2, Infinite gives the player a more helpful young lady to promenade around Columbia with.  Elizabeth, who at first comes across as another princess in need of rescue, is actually full of superpowers.  DeWitt will be able to get his hands on some powers of his own, but Elizabeth will help out, and the two of them can combine attacks for extra-effective combos.

A completely new feature to the series is the Skyline.  Because the game takes place in a floating city, of course the natives would have found ways to get about their city without, you know, plummeting.  Therefore, they’ve built a series of rails that DeWitt can use to travel around the city on through a sort of grappling hook.  These sequences will play a bit like on-rails shooters, but players can jump from line to line, controlling their path.  As designer Ken Levine describes them it is “like being on a roller coaster, but you’re hanging in the air and you’ve got a [email protected]¢king gun.” 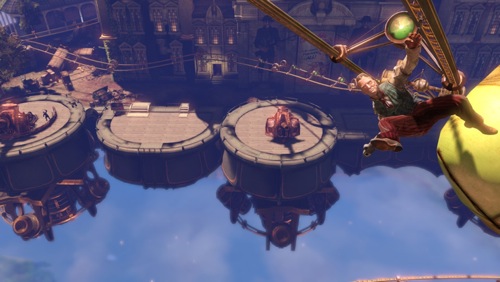 Infinite is still many months away and there are lots of details to be discovered about the game, but the information available so far makes it look like Irrational’s tour through Columbia is going to be another thought-provoking, action-filled blockbuster.