By: Justin Moody | Comic Reviews | May 22, 2010
Gail Simone (Wonder Woman) continues where she left off with the re-launch of Birds of Prey. This time around she's joined by one of the best artists in the industry, Ed Benes (Justice League of America). The issue is under the Brightest Day banner since its stars one of the twelve resurrected characters. The group consists of mainstays like Oracle, Black Canary, Huntress and Lady Blackhawk with the addition of Hawk and Dove. Hawk being the dead man walking.

Story weaves from one character to the next as Oracle must unite the team. Black Canary and Lady Blackhawk find themselves in Iceland trying to rescue a kidnapped girl. After a lengthy but futile conversation, Black Canary takes down the scummy kidnappers showing why she's bad ass. When Huntress receives Oracles call, she's pounding on some street punks and making it look easy. The avatars of Peace and War, a.k.a. Dove and Hawk are engaged in battle with an evil Pep Squad. Hawk forces himself to deal with the idiot teenagers with restraint. Hawk is still dealing with being resurrected and figuring out his place in the world. 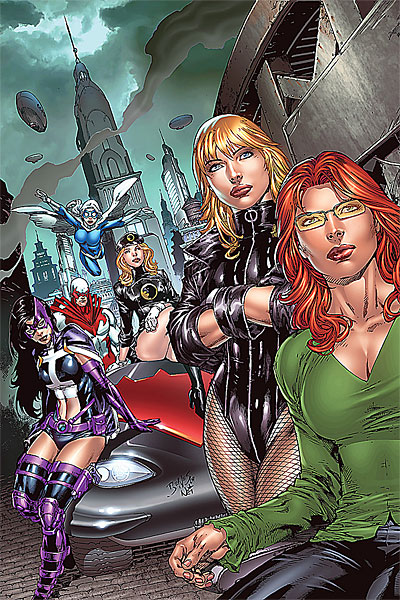 Afterwards, Hawk and Dove kill some time at a local bar. Hank, Hawk's alter ego, is engaged in small talk with a drunk at the bar. Hank is one pissed off dude and has several issues with the world and seemingly everything in it. Dove stills in the back keeping an eye on him, acting as his babysitter more than his partner. While Hank tells off the world, Lady Blackhawk approaches Dove about joining the team.

Oracle meets with Black Canary and Huntress meet under a familiar Gotham skyline, to discuss what has Oracle so freaked out. It seems that someone knows more than her. Or in other words, knows more about the team than they'd like public. Whoever it is wants to play a game with them, or they'll start killing people in their life. The joyous reunion is cut short as an altered bat signal summons them. Black Canary and Huntress are quick to the scene only to find the Penguin under attack. After a brief battle they find themselves face to face with the White Canary.

Gail Simone slides right back into her groove with this issue. The problem being that she assumes the readers will as well. She mentions only in passing what the team has been doing since being disbanded and touches on the fact that Bruce Wayne is out of the picture. The status of Green Arrow and Black Canary's relationship isn't even brought up or dealt with. Black Canary in general seems to shrug off major events in her life as if they meant nothing. The death of Sin, a character Simone breathed life into, has little to no mention in the book. Practically the entire dialog at the beginning of the story is pointless and the scene itself is drawn out.

That's not to say that the story didn't have its strengths. The emotional connection that the three main characters share is genuine and up-lifting. Hank as a whole is full of fiery dialog and tons of one liners. The entirety of his character seems to be that he's an asshole, but he plays it well. The same cannot be said for Dove, who seems to be the exact opposite of Hawk. She has zero personality and frankly hardly even participates in their battle.

The art is phenomenal for this issue. Benes is known for drawing beautiful women, so this book is a perfect choice for him. Yes the women come off overly sexy, but Benes does a great job of making them strong and confident as well. They are definitely more than just sexual objects. His art style matches Simone's writing and definitely helps with the ups and downs in the story. Each character is really recognizable yet retains their own features. That is to say that they don't all share the same jaw line and body structure.

Simone is back at home with the title that made her a star at DC. It's clear that she hasn't forgotten the readers that originally supported the book, but it would be nice for her to welcome new readers as well. Benes is very good about staying on books as long as he's allowed, so let's hope DC locks him to a solid year on the title so that people can really latch on. Overall the book moves a little slow and doesn't cover a lot of ground, but it does set up interesting set pieces and gives a home to characters in need of a title. A rough start but not a bad one by any means.

So now we have the White Canary, the Jade Canary and the Black Canary... when do we get a Yellow Canary? Follow the Dustin Canary on Twitter (get it another bird reference?) and ask him anything on FormSpring.