"Penny Pain"
By: Jim Bush | Comic Reviews | February 28, 2015
In Bitch Planet #3, there is a departure from the first two issues of the series, as this issue centers solely on Penny Rolle, the large and short-fused inmate in the correctional facility. The cover of Bitch Planet #3 states, “The Secret Origin of Penny Rolle” and that’s a pretty apt description. While her story could have been interesting, I felt that the focus on only one character, especially so early in the series, limited the scope of the issue, making it less enthralling and unpredictable than the first two. 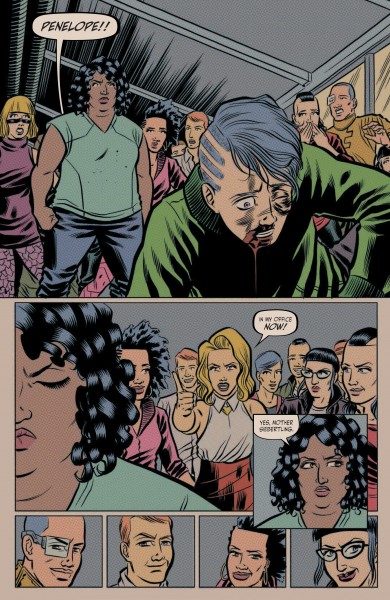 As you could probably guess big, bad Penny Rolle wasn’t always this way. Once she was a sweet girl who made cupcakes with her grandmother. That was until her grandmother was taken away by authorities and Penny was forced to grow up in a boarding-school situation, and she got angrier and angrier. Honestly, I felt like Penny’s origin is a little underwhelming and predictable. When we finally get to the scene with Penny as an adult operating the “Born Big” cupcake shop, where she goes bonkers and punches customers, it’s more entertaining and closer to the way that present day Penny acts.   Part of my problem with Penny’s backstory is that it victimizes her. Why can’t badass adult Penny come from badass kid Penny? Instead, her present is the result of what others have done to her. There are moments when Bitch Planet is reminiscent of the Netflix show Orange is the New Black, but one area I hope the comic departs is that nearly all of the convicts on O.I.T.N.B. had a sympathetic backstory that made them seem like good people who got into bad situations. That’s simply not true of all people in general, especially convicts. On the hand, while a movie like The Dirty Dozen has certainly aged in a somewhat chauvinist way, one thing it gets right is that some of the convicts are bad people, and that doesn’t make them less interesting characters. It makes them more interesting. 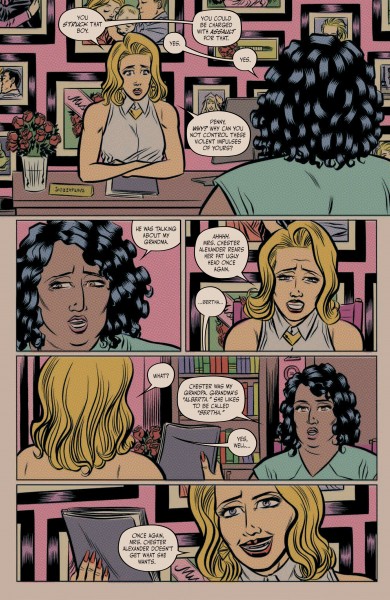 The Penny Rolle that we’ve seen in the story-present of Bitch Planet is a great character. Her backstory, on the other hand, is less compelling. The strongest moments of Bitch Planet #3 is when she is confronting the “Fathers” in the present of the issue. She doesn’t care what they think and she wants them to know it. When they hook her up to a contraption that will reveal her “Idealized Actualization,” it shows her exactly how she is, and she laughs in the faces of the Fathers. It’s a little predictable but still a good character moment.   The other qualm I have with this issue is that all of the antagonists, from the Fathers to Mother Siebertling (who runs the school), are such caricatures that they don’t really make for good foils. They are so ridiculously prejudiced or rule-followers that there’s no moment where our loyalties are tested. They are presented as totally evil or totally absurd characters to hate for what they’re putting Penny through. Some of the antagonists in the first two issues of Bitch Planet felt more dimensional and threatening, so I hope the “villain” characters are more in that line for issue #4 and beyond. 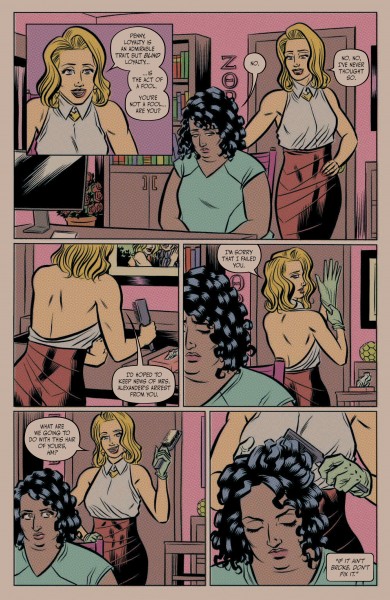 The best thing about this issue is the art of Robert Wilson IV, who is a guest artist in place of series regular Valentine De Landro. He draws Penny in a powerful and defiant way in the story-present. Additionally, the “flashback” scenes of younger Penny are drawn and colored in a faded and Ben Day dot fashion of old comic books. On one hand, it’s a trick that makes the panels look like yesterday’s comics, but it also actually serves the story well by making clear visual distinctions between the story past and present.   Although Bitch Planet has started off strong with its first two issues, the third slows things down. With all of the story momentum from the previous issue, it was disappointing to have none of those plot threads advanced and instead get an entire issue dealing with past Penny, who is frankly not as interesting as present Penny. Something about this issue feels like a fill-in and while that might be the case, it comes at somewhat awkward timing for the series. I’d rather wait longer and have a third issue that follows the story after the second. In any case, it appears that #4 will bring us back to the story, which should be a welcome return.
Rating
5.9
Pros