"Rock Concerts, Infograhpics and Tablet Updates "
By: Zack Zwiezen | Mobile News - PC News | October 22, 2014
Blizzard has announced that the Android Tablet version of Hearthstone is coming later this year and they have delayed the iPhone and Android phone version of the game till "early next year." Blizzard also released an infographic about Hearthstone, which showed the game has been played by 20 million users. Along with this news came the announcement that Metallica will be performing live at this year's Blizzcon.

In a recent "Hearthside Chat", Blizzard gave a status update on Hearthstone explaining that "The team has been hard at work to bring Hearthstone to that platform, and is making great progress. We’re taking things one step at a time and we’ve got our sights set on a release for Android tablets, our next new platform, before the end of the year..." As for the announced iPhone version and Android phone version of Hearthstone, Blizzard had some less than great news for fans.
"We’re also close to having Hearthstone out to our iPhone and Android phone users, but it’s become clear that we need a little more time to get that version right. While we have a build up and running internally, it needs a bit more work, and we don’t feel like we’ll be ready to share it with you until early next year."
Blizzard stressed the importance of making sure the phone version of Hearthstone was "...just as accessible as the tablet and PC versions." And explained that  "One of the biggest challenges... is revamping the user interface so it feels intuitive and offers the same quality Hearthstone experience, but this time from the palm of your hand. Releasing Hearthstone on iPhone and Android phones is something we’re incredibly excited about, but ultimately we’d rather take the extra time to make Hearthstone’s user interface on the phone customized to feel great for the platform..."
Along with the update on the Android and iPhone versions of Hearthstone, Blizzard released an infographic that shows the amount of players, hours played, most used cards, highest win streaks and more. Click the picture below to see the full infographic. 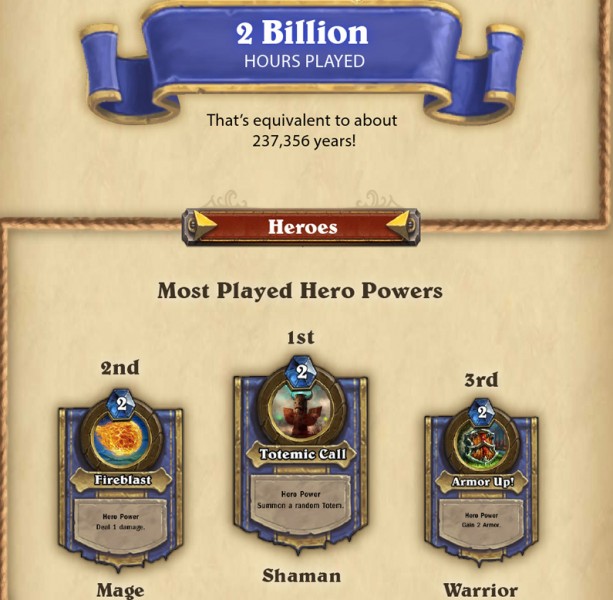 Finally, Blizzard announced that the band Metallica will be performing live at Blizzcon. The band will be performing the closing concert that wraps up the Blizzard focused gaming convention. In a press release CEO and co-founder of Blizzard Entertainment, Mike Morhaime said “We’re thrilled to have Metallica blowing out our speakers at BlizzCon this year. After two full days of epic gaming and intense eSports action, an earth-shaking concert is the perfect sendoff for everyone at the show and watching from home.”

Those who aren't going to Blizzcon can see the concert and all of the other events and announcements live if they purchase a "Blizzcon Virtual Ticket."
Hearthstone is currently available on PC, iOS and Mac.