"The 'Souls' series returns in a new form for it's darkest and most beguiling entry thus far"
By: Euan Dewar | PS4 Reviews | April 4, 2015
There's a lot resting on the shoulders of Bloodborne. One of the first true killer apps for the PS4, the next entry in one of the most celebrated franchises of recent times and the return to the helm of Hidetaka Miyazaki, the much celebrated game director who's absence was somewhat felt in the previous entry. Yet, there isn't a single second of Bloodborne that seems cowed by all of the expectation. This is as confidently designed a game as you're going to encounter, and yet another spectacular entry in this seemingly unstoppable series. 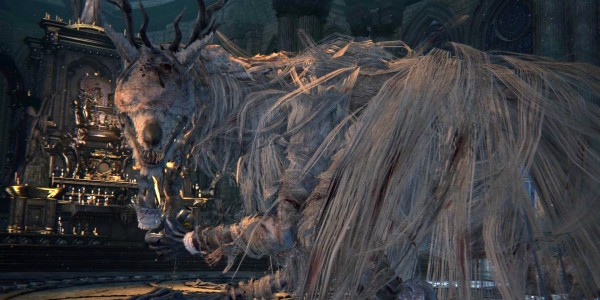 Don't let the name change fool you, this is pure Souls through and through. Every step you take is a tentative one, filled with dread for what dangers might lurk just out of your periphery. Hoping you make it to the next lanter (this game's bonfire equivalent) before you stumble upon something that rips you to shreds before you can even conjure up a stream of expletives.
However, while the framework and sensibilities remain much the same as it's predecessors, the details that fill in the gaps break into new territory. Instead of the medieval dark fantasy as viewed through a Japanese lens that defined Dark Souls et al we're now getting this series' take on gothic horror, with a lovely bit of eldritch mythology thrown in to add another dimension to proceedings.
This new overall theme gives Bloodborne an astonishingly survival-horror-esque feel. The terror that you get typically get in a Souls game from your character's fragility is now pared up with some fantastically chilling jaunts through candle-lit cathedrals and bedraggled Victorian streets. This is a dark, bleak game, where death is around every corner and hope seems somehow even more dire than it did in Lordran. Man is turning into beasts (plenty of lycanthropic thrills to be had) and otherworldly presences are treated like deities. The central city of Yharnam is a real potpourri of some nasty, nasty stuff.
Surprisingly though, there is also a decidedly psychedelic side to this game. While previous Souls games weren't exactly bastions of realism, they were still rooted quite firmly in the physical world. Bloodborne, however, is quite happy to go on excursions into hallucinatory territory or even mess with it's own visual design in some enjoyable ways that you might not expect, especially later on. Hell, this game's hub area literally is inside a dream. 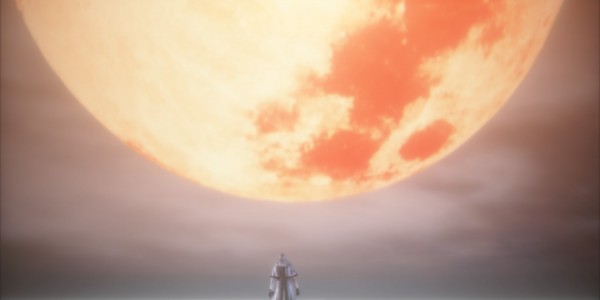 Blood, as you might expect, replaces Souls as the main desire of this world's burdened inhabitants. Any being you meet who doesn't want to kill you will likely repeat the refrain of "You must seek the blood". Naturally, this focus extends to the gameplay too. When you defeat an enemy you pick up 'Blood Echoes' you can use to level up, the estus has been forgone in favor of 'Blood Vials, a health pick-up that functions similarly to Dark Souls 2's life gems.
These thematic shifts are exciting stuff but the most thrilling changes are to be found within the minute-to-minute action. The same R1 for light attack, R2 for heavy etc etc. still holds true but, beyond this, all bets are off.
Bloodborne has no shields, which means no more hiding behind them and safely working your way through a fight. You have to be as up front and in your face with enemies as they are with you. A more adventurous play-style is further encouraged through the new health-regain system. This allows you to recover lost health by quickly striking back at your attacker before the chance is lost, making going all in with your attacks just as viable as skittering away.
The parrying and backstab systems have also been changed via the inclusion of guns. Yes, guns. Now you use your trusty sidearm in much the same you previously used your shield to parry, timing a shot just right in the middle of an oncoming enemy's attacking animation which then staggers them, allowing you to run them through with your melee weapon for huge amounts of damage. Backstabbing is no longer a simple R1 behind the foe. Instead you have to charge attack them first, then follow up with the backstab. 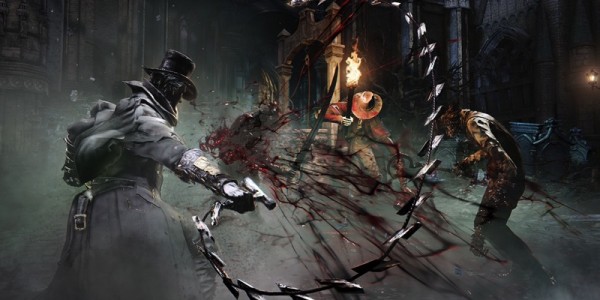 Armor also has less importance than it previously did. The differences between the various different sets you can find/buy are quite minimal unless you want something for a very specific circumstance like say, an enemy that deals mostly in arcane magic attacks. You're no longer weighed down by your armor either, so there's not fat roll to worry about. All these changes effectively make what your character wears more of an aesthetic, role-playing choice rather than an important gameplay one. Whether that's a plus or not is up to you of course.
One of my personal favorite additions is that of transforming weapons. Rather than include a huge swathe of weapons as they previously did, From has gone for a smaller roster of arms that have multiple functions. For example, I spent much of the early game using the Saw Cleaver which can extend from a swift-moving short-axe style thing to an extended cleaver with a different move set suited for longer-range battles. It's a great deal of fun having the ability to mix things up like this mid-fight, especially when the weapon's transformation between forms is an attack in of itself.
The general fodder enemies (well, as much as an enemy can be fodder in one of these games) are broadly faster, more vicious with their attacks and more consistently travel in packs than you might expect. The bosses though, are classic Souls. Tightly designed, imaginative in form and just real challenging bastards to beat. Some are big monolithic buggers and others are more one-to-one adversaries for your character, all of them have something to offer. Your milage may vary of course, but the immense satisfaction you get from finishing one off is guaranteed. 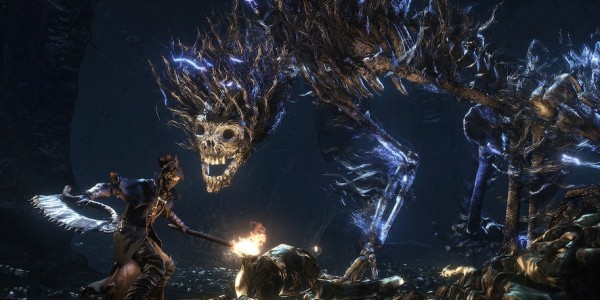 Actually, as a whole, Bloodborne's difficulty is a little more evenly spread throughout the game in comparison to it's predecessors. If you imagine Dark Souls' difficulty, for example, as a straight line with various peaks and troughs along the way, then Bloodborne is more of a constantly ascending one. This makes for a smoother complete challenge overall but some of the scenarios later on are particularly barbarous. Occasionally dipping into being flat-out frustrating and even tedious when respawning foes (that can be stemmed by killing a certain type of enemy in the area) are introduced.
Should you need help with any of them you can, as has always been the case with this series, summon in some help from. Tread carefully though, as summoning in help now also has a chance to summon in an antagonist player to hunt you down and do you in. On the whole though, much of the game's core online functionality (co-op, PVP, messages etc.) remains largely unchanged. If getting into scraps with other players online wasn't your bag before, chances are that'll be the case here too. Though there is one welcome new addition in the form of a password you can set in your world to make sure only people that have it can join, making it easier than ever before to link up with a specific player.
For those uninterested in online play but still looking to wring a bit more out of the game From has included 'Chalice Dungeons'. These feel like they're aimed squarely at the 'roguelike' crowd. Self-contained dungeons that sit apart from the main game, some procedurally generated and some with their own unique enemies. As a bite-sized distillation of the Souls format they're quite good fun, and some make a surprisingly decent case for procedural generation in this franchise. However I did tend to enter them over-leveled for what they threw at me, meaning I flew through some without ever being troubled. A more thoughtful approach to their distribution in relation to the player's level would've gone a long way.
Bloodborne's biggest issue is one of those pesky ones that might be solved by the time you read this, but at the time of writing is a bit of a blight on the game: Long loading times. They aren't completely outrageous, but they needn't be to frustrate. Think about how often you're likely to die in one of these games, or even how frequently you'll go back and forth between the hub and the 'real' world. All of these things require sitting through a loading screen that could take up to half a minute. This is a real case of Frequency + Length = AGHHHHHHHHH.  Very annoying. 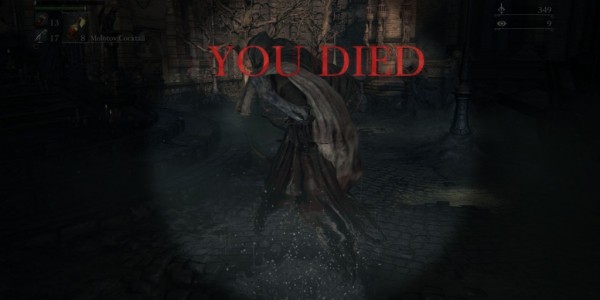 However much this ticks me off though, I wont pretend for a second that it should put you off giving Bloodborne a go. It is staggering that even with four games (plus DLC) in six years I am not even slightly close to tiring of this series. Miyazaki and company have created yet another beguiling world for you to get lost in, and they've managed to shake up a winning gameplay formula in ways that do nothing but improve it. Every single one of it's intertwining pathways is rewarding to venture down, every new area to explore an unnerving yet enticing invitation into the unknown. This is the tightest and most unique Souls game yet and beyond that it serves as a signal that this series can only get more exciting.
Rating
9.5
Pros