By: | Xbox 360 Reviews | September 18, 2011
Older publishers have been trying to adapt their 2-D classics into modern 3-D games, but Majesco is doing just the opposite with their Bloodrayne franchise. Originally Bloodrayne was a third-person shooter/slasher hybrid about a sexy vampiress who fights Nazis. Neither the first game, nor its sequel were particularly well-received, and there hasn’t been a new game in the series for close to seven years.  Now Rayne rises from the dead as a downloadable 2D sidescroller.
The shooting, slashing and sexy goth chick are still present in Bloodrayne Betrayal, but this a completely different game, and that’s actually a good thing.  Every game is someone’s favorite game, but I doubt that there are many hardcore Bloodrayne fans who’ll lament the changes to the series. The older games weren’t terrible, they were just unremarkable aside from the visual design of the main character, and the cleavage-jiggling component of the physics engine. 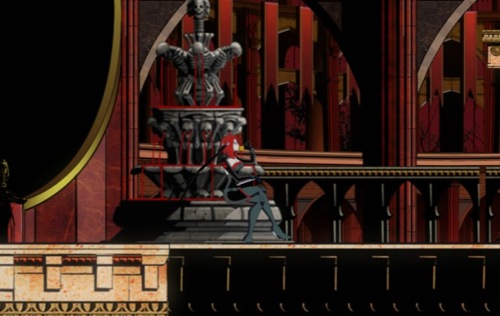 For those who are familiar with the Bloodrayne games (or movies), the series is set in modern times, with Rayne once again assisting the Brimstone society on a mission to investigate a mysterious castle that turns out to be a base for Rayne’s evil vampire father, Kagan.
The new game is made by Way Forward Industries who are the developers of the Shantae series of awesome sidescrollers, and with such a pedigree, it isn’t surprising that Bloodrayne Betrayal is the best game in the series.  Betrayal boils the franchise down to its basic elements: Rayne’s trademarks arm blades, vampiric bloodsucking, and a story about a good vampire fighting against supernatural evil.
It has a definite “Old School” feel about it, which is appropriate since this sort of gameplay predates the first games in the franchise by several console generations. Fans of platformers and beat’em ups will enjoy this, and it seems designed for that hardcore crowd. 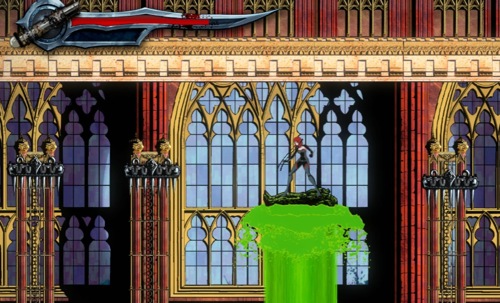 A unique feature is Rayne’s blood drinking.  The only way to heal up between checkpoints is by stunning an enemy, then using a dedicated button to feast on their delicious blood.  Holding down the “Bite” button will perform the healing power, but giving it a quick tap will “Infect” enemies.  Once an enemy has been infected, Rayne can then make that enemy explode on command.  Now this isn’t something from traditional vampire lore, but is a distinguishing gameplay feature that makes players choose between healing and offense.  It also must be used to blast through certain blocked-off areas and to crack armor on some enemies.
Bloodrayne Betrayal gets very difficult very quickly, and even the first level requires some skill to complete.  Rayne has a bunch of moves that need precise timing to pull off, and most levels have some sort of puzzle element that require her to use specific techniques to progress through the level, such as kicking enemies into parts of the environment, or the infected explosion power.  It isn’t Metroid-style gameplay, because Rayne has access to all of these techniques right from the beginning of the game, but the player has to master them in order to progress.
Aside from the high difficulty, enemies consist of a handful of types, and Rayne will find herself fighting half a dozen identical enemies at once.  Still, some of those enemies are very creepy looking, especially giant humanoid blobs with translucent heads. 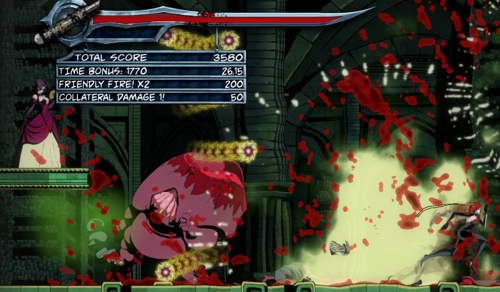 There are fifteen levels and most of them only take a few minutes to complete.  However, as Rayne makes her way through the castle, she fights increasingly difficult enemies, and has to navigate some very tricky areas full of environmental hazards like the obligatory spike-filled pits and saw-blades.  While a skilled run-through of any particular level can be done in minutes, it’ll take a lot of trial and error to make it to the end.
Adding to the game’s play time is that players can only save at the end of a level.  There are checkpoints spread around each level, but they are only used for respawning.  If you meet a difficult boss and need to take a break from the game, you’ll have to restart from the beginning of the level.


Due to its short length and steep difficulty, Bloodrayne Betrayal is best left to hardcore fans of the action/platformer genre.  For fans of this style of classic action platforming, it is a good use of the 1200 Microsoft points.   Less hardened gamers will likely find themselves growing frustrated after a short amount of time with Rayne.
Rating
7.7