Upon finishing this issue I asked myself, “Where is this story going?” The novelty of the series is wearing thin as it continues to make fun of actors past their prime in this alternate fan fiction story that has more characters then scenes good enough to use said characters in. Really this series reminds me of the movie Big Trouble, only with more drugs, sex and violence. Ask yourself, if you added those three things to Big Trouble would the movie somehow be better? Or even good? If you found yourself saying yes, then you’re probably one of the people buying this book, which has developed a fan base of sorts.

Allow me to clarify that it’s not that the book offers nothing for me personally, as I can usually find something to like about a book. It’s that it comes across as an excuse to glorify drugs, movie stars and brutality. There’s no story there, just scenes that are meant to be shocking. At this point I’m assuming the main character is the Steven Segal knock-off in the story since he’s had the most screen time, but after thinking about it, it didn’t really matter since the story isn’t structured to have a main character. 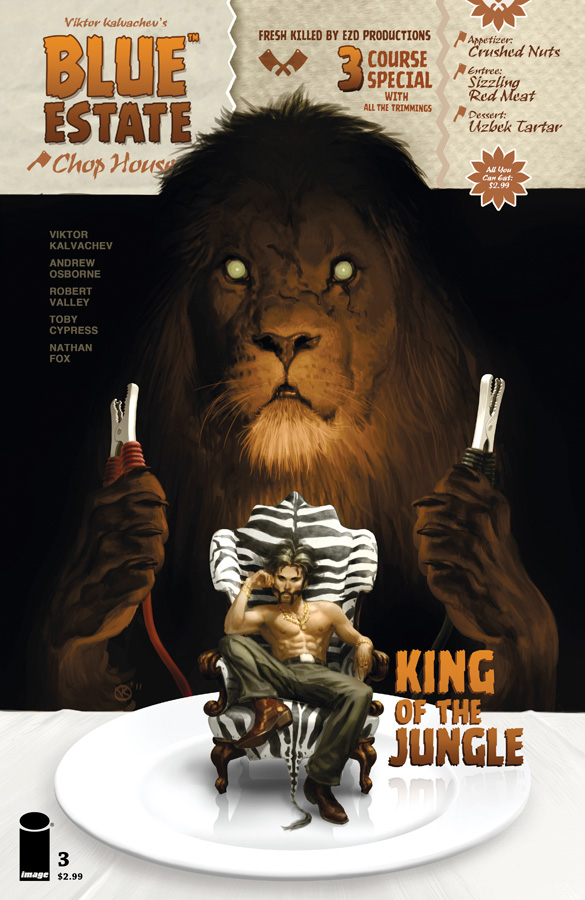 In this issue we see Steven Segal (I know that’s not his real name, but that’s who it is) beat the living shit out of two football players that have disrespected one of his friends/goon’s girlfriend. He beats the shit out of them even after they beg for their lives and it would be scary moment if he didn’t use their own cell phone to take a picture of them for, “Reconstructive surgery.” Any fear the scene had instantly becomes comical, but the main problem is that if it’s attempting to be a dark comedy it fails to do that as well.

So all we’re left with is a scene that’s not scary or funny and full of violence that really holds no meaning for the reader and it’s a long scene that’s even gone back to at the end of the issue. There’s a fine line for good and bad ultra-violence. Writers like Garth Ennis and Warren Ellis are familiar with this and produce products that may not always hit the sweet spot, but always come close. The three person writing team for this book seemed to have missed the finer points of ultra-violence in the fact that it’s supposed to involve characters you care about. If everyone is a piece of shit then the reader is wasting their time reading about them. Perhaps the message the writers are going for is that there’s no justice and its bad guy eats bad guy out there in the real world… or maybe they just don’t understand basic story telling.

As far as the art goes it has this ugly realistic look to it. No one is attractive and basically the people reflect the ugly world they live in. Every flashback shows the younger youthful versions of the characters, but even then they’re not attractive. Usually ugly characters don’t bother me, but there’s something about the way the characters look and act in this book that makes it hard to appreciate the art. Everyone just looks like someone you don’t want to spend your money looking at. I’m not saying you should go buy a pretty superhero book, but I think a book like Green Wake which is beautiful and yet full of starling images is a far better choice for your dollar.

You may see a future review for this series on the site, because if there’s an interest we’ll keep covering it trying to figure out for ourselves why this book is growing in popularity. Is it the covers? Possibly, but the interior art is completely different so why stick with it? Personally I’ll never pick up another issue. So far the three issues released have done nothing in the way of telling a story that’s interesting and has done everything in its power to convince me not to read it.