“Home,” the seventh episode of Boardwalk Empire’s first season, deals with the emotional scars carried around by its characters.  In case that is at all unclear to the viewers, each of the three characters the episode focuses on have physical scars to go with their emotional ones, and the visibility of their wounds directly correlates with the depth of their personal issues.  As narrative tricks go, it’s not exactly a subtle one, but that doesn’t make it any less effective.

The most obvious scars belong to Richard, Jimmy’s new friend he meets at a veteran’s hospital, who is missing half his face.  In a failed attempt at hiding his wounds from the world, he wears a tin mask over half his face, with his former face, complete with glasses and a mustache, painted on it (in another not-at-all subtle touch, Jimmy is reading the novel “The Tin Solider” when the two meet).  What the mask tries to hide it ends up just calling attention to, as there are few things creepier than a man whose mouth doesn’t move when he speaks.  As much as he can’t fit in physically, Richard has just as many problems emotionally.  A former army marksman who is still so hung up on the war that he carries around the mask of a German sniper who he killed everywhere he goes.  He also makes casual mention of the fact that he owns nearly as many guns as a small armory.  Jimmy attempts to bring Richard back into the world, setting him up with a prostitute.  But it quickly becomes apparent that this man is a lost cause, and in the end he does the only thing he knows how to do anymore, becoming a sniper again to assassinate the man who sliced open Pearl’s face. 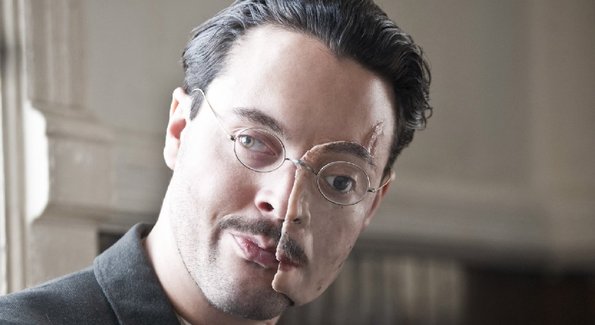 Jimmy also returned from the war with scars, these on his leg.  While he can hide those with his clothing, anyone who takes a close look at him can see that he walks with a limp.  Similarly, Jimmy appears as a man who has rejoined society, but a closer inspection reveals how he has been unable to reconnect with his family and his recklessness has sabotaged his (criminal) career.  And now, on top of that, he has guilt over Pearl, the prostitute who he had taken a liking to, getting sliced in the face, leading to her suicide.  When he tracks down the man who cut her, it at first appears that he’s going to simply put the fear of God in him.  That he’ll be able to move on beyond the tragedy.  Of course, the minute he leaves the man, his friend Richard shoots him in the head (it wasn’t completely clear to me whether Jimmy was in on the hit or Richard was acting on his own, but after multiple viewings I believe that Jimmy knew it was coming).

And finally there’s Nucky.  He’s easily the most successful of the group, with a thriving (criminal) enterprise and a high status in society, and as such his scars are much less noticeable.   In addition to his financial success, he is embarking on what might be a healthy relationship (aside from the little fact that he had her husband killed) with Margaret Schroader.  But he is certainly not without his past trauma.  Nucky’s desire to have a child has been shown to us before, but this week we meet his father, and see how much his father cares for Nucky’s brother compared to himself.  We also hear about how he used to prod Nucky with a hot poker, giving him a scar on his hand that he tells Margaret about.  Like Richard and Jimmy, Nucky attempts to move beyond his hatred of his childhood, giving his father’s old house to a family to be fixed up and lived in.  But some wounds cannot be cured by a new coat of paint, and in the end Nucky burns the house to the ground, unable to see it as anything other than a place of misery.

All of these wounds are ones these characters will carry around with them for their whole lives, and nothing will change that.  While I wish the plotlines intersected in more ways that weren’t simply thematic, I can’t say I wasn’t interested in every one of them.  I’m still hoping Jimmy returns to Atlantic City before too long, so we can see our main characters try (and fail) to hide their scars from each other.  And while they’re doing that, they’ll undoubtedly give each other a few new ones.