Linda’s parents are coming to visit for the weekend which has put her into a cleaning frenzy. She begs Bob to fix their leak in the roof because she doesn’t want her mother commenting about the ten or so pots they have catching the water. Bob agrees after he realizes he doesn’t want to hear her voice on the subject either. Before he heads to the attic he and the kids have to decide which room the in-laws are staying in. At first Gene’s room is chosen because it smells like farts and he’s transferred to Tina’s room. Tina’s fine with it, but Tina has night tremors and gets up every night violently punching and kicking the air. Tina goes on to explain that it’s due to watching Night of the Living Dead when she was eight, but now due to her budding sexuality she’s making out with the Zombies that are attacking her. Bob quarantines Tina to Louise’s room and puts the other two into Tina’s room.

Once up in the attic Bob fixes the leak by putting another pot underneath it, but because it’s in the attic it’s not dripping down stairs. Unwilling to come down from the attic right away Bob discovers a crawl space that runs along the interior of the walls of the house. He jumps down and begins talking to the family. Linda asks him to come out before he gets stuck and bingo, Bob gets an idea. He tells the family he’s stuck and thus removes himself from having to deal with Linda’s parents. Around this time the in-laws show up and they both start in with the sounds that make Bob cringe. The mother in-law clears her throat constantly and calls for her husband “Al” in the most annoying voice ever.

Linda calls for Teddy the contractor to come get Bob out of the crawl space, but Bob talks Teddy into coming back the next day to get him out. Teddy tells him he still has to charge him for the visit and Bob yells at him. The two exchange banter until Teddy’s logic prevails and Bob agrees that he should be charged. For his first night in the crawl space, Bob takes Gene’s video camera to film himself Blair Witch style and Louise’s Kuchi Kopi night light which looks like something from a Japanese cartoon so that he can see. He’s enjoying his freedom until he and everyone else in the house hears the in-laws going at it like two horny teenagers.

This show has a bunch of great gags that mostly involve the kids. Bob being stuck in the wall, fuels so many jokes for the kids to play off of. Gene fails his history report because he sampled the sound of his grandparents getting nasty and played it for the class. Louise convinces her friends that her dad is dead and is talked to by the school counselor. Tina in order to make her Father proud crawls into the ceiling panels of the school to take a nap, but ends up peeping in the boy’s locker room and these are just the set ups for further jokes that the kids will make. 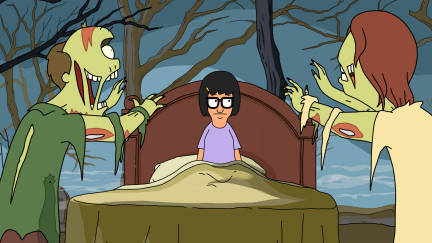 The writing is great for the episode even when it does the typical cartoon thing and makes fun of the Shinning. Instead of the creepy twins showing up it’s just the Kuchi Kopi nightlight talking to Bob telling him to kill his mother in-law in a bar that's magically connected to the crawl space. This is basically due to the fact that Bob hasn’t taken a poop in two days and is starting to feel the effects. The ending of the episode has a bit of heart and makes Bob’s Burgers stand out from other animations that are just going for jokes because the characters are bigger than the story. With Bob’s Burgers it’s about how the characters respond within the story that makes everything funny and the Shinning jokes proves as much.

The best line is when all three kids are in front of the counselor. Tina’s not in on the joke about their dad being “dead” and she acts stunned by it. Louise chimes in telling the counselor that they were going to tell her on Father’s Day and that now they have nothing to do on that day.
Rating
9.2