Bob’s Burgers is the newest member of Fox’s “Animation Domination” in which they cram the Simpson’s and three version of Family Guy together on primetime Sunday. The first thing to note about Bob is that it’s created by the co-creator of Home Movies Loren Bouchard. Bob is voiced by H. Jon Benjamin who many will recognize as the voice of Coach McGuirk and of FX’s Archer fame.

The pilot episode “Human Flesh” begins with Bob giving his family a pep talk. This scene is used to quickly establish two things 1) Everyone’s personality and name 2) Everyone other than Bob is an idiot. This is very apparent when Tina, the oldest daughter, informs Bob that her crotch is itchy. Bob fires back asking her if he’s telling him as his daughter or his grill cook and that neither one should tell him. The pep talk ends with Bob telling his family that their all terrible at their jobs and that if he could he would fire all of them. 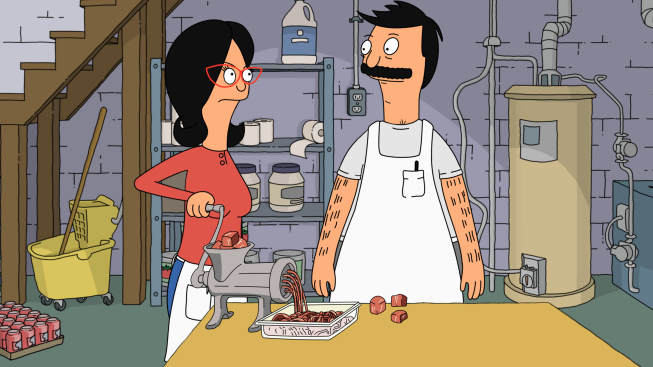 Bob and Tina his wife head downstairs to grind the meet leaving the children alone to run the restaurant. It’s a big weekend for Bob as the restaurant is having its grand re-re-re-re-opening, but too bad for him that the city health inspector is showing up to investigate a rumor of human flesh in the hamburgers. While inspecting the kitchen it’s revealed the inspector dated Tina before she ran off to marry Bob. Out of spite he displays a sign warning patrons of the possibility of human flesh in their food.

This show is hilarious! The children are by the best part, particularly the youngest daughter Louise voiced by Kristen Schaal. Even though she is the youngest she is clearly too smart for her age, which means she screws with people constantly. The entire family has great chemistry and they’re very well written. The show also has a lot of heart to it since this family is not the richest and keeping the restaurant going means keeping their home. 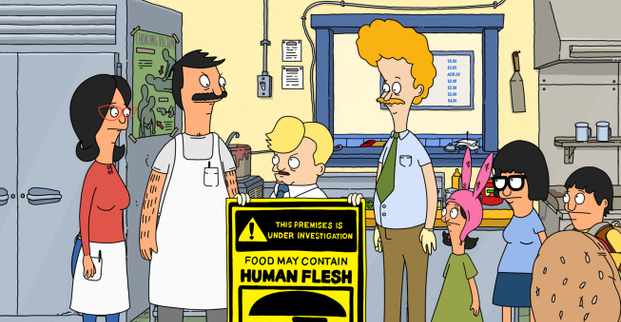 The animation style will probably put a lot of people off on the show which is a shame. Personally I was not bothered by the style and like that it looked very different from everything else on fox. It has an ugly realistic look to it that is absent in most animations today. A true sign of its ugliness is the fact that background characters are not generically pretty. In fact most of them are damn ugly which a lot like real life is.

If you’re curious about this show I recommend watching it on Hulu to give it a shot. Personally I thought it was a hilarious and have watched the first episode a few times now and still laugh. I don’t think it will be as successful as the Family Guy domination, but I think it’s a much better product. Find it on Hulu or watch new episodes every Sunday on Fox.