Tina’s thirteenth birthday is coming up and the family approaches Bob about making it really special for her. They all take turns listing this they’ve read from her diary that makes them feel that she really needs it. Linda of course only reads her diary to make sure she’s not on drugs, whereas Louise feels that Tina is better on paper. Bob can’t believe that the entire family reads her diary, but agrees to give her a greate birthday. They call her over and ask what she wants to do for her special day, to which she spouts off a coherent and detailed list. As she lists every detail, Bob can’t help to shake his head no to several of her requests. Mainly the one where she kisses Jim Jr. the son of Bob’s rival from across the street.

As Bob and Linda talk about the party, Louise decides to help Tina with kissing. She runs through a series of questions ranging from, “You know what it’s like to lock lips with a man?” and “If you’re not careful out there you could get yourself killed!” After each comment or rhetorical question Louise slaps Tina’s face. Once Gene gets involved she slaps him too. Bob doesn’t know how they’ll afford to shut the restaurant down for a day and get everything she wants for the party. After looking at her so pathetically they decide to do whatever they have to, to give her the party she wants. 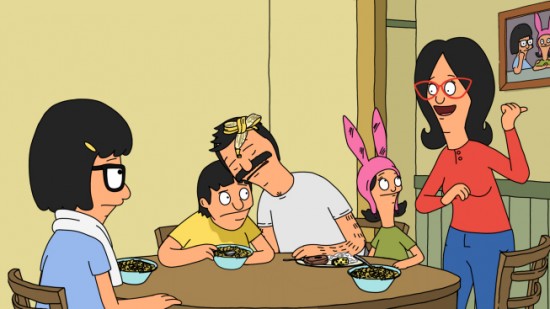 Bob has a talk with his landlord Mr. Fischoeder (pronounced Fish-odor) to see if he can be late on his rent. Fischoeder has him meet him on the docks at night in the middle of a thick fog. He’s won’t grant Bob an extension, but he offers him another way to make money by driving a cab. Bob takes the job, mostly because he wants to wear the cabbie hat offered to him. The next day he goes over the plan with the family. He’ll work days at the restaurant and nights driving cabs. On his first night out he encounters all sorts of people. His first customer is a drunken guy that pukes everywhere forcing Bob to hose out his cab. The next fair is a horny couple that has sex in the back seat and again forces Bob to hose out the car. After a while Bob gets the lay of the land and even makes some friends.

This is definitely one of the strongest episodes yet. There are two plot lines running through the episode, the first being Bob working two jobs to pay for the party; and the second is Tina becoming a woman while trying to get everything she wants for the party. There’s a lot more to this episode than just jokes, there’s actually touching family moments which have become absent from most of Fox’s animations. This was another father-daughter building episode which did a good job of developing both characters. In recent episodes there’s been a trend of toning down Gene which is not good since he’s the least developed character. He’s used effectively in this episode as the DJ for the party, but he’s really falling to the back ground compared to the other four characters. Louise continues to be hilarious as practically everything she says is hysterical. It would be interesting to see a similar episode developing her relationship with either parent. 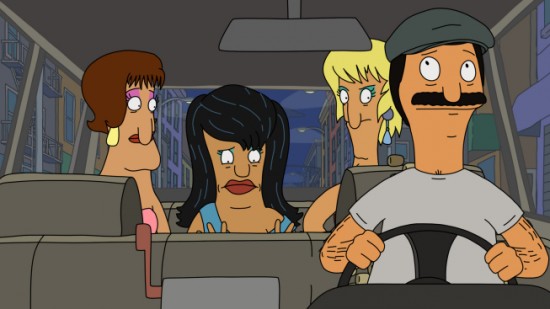 As it stands this is definitely one of the best episodes thus far, but it’s far from perfect. There were way too many characters introduced due to the cab scenes and this was the first mention of Bob’s rival Jimmy from across the street. Regardless of those two items, the show continues to display a lot of heart with its comedy and because of that it stands out from everything else on Fox’ animation circuit. If you’re still not watching Bob’s Burgers then swing by Hulu to catch up on the first five episodes and be sure to check it out Sunday’s on Fox.